MONEY, THAT’S WHAT I WANT 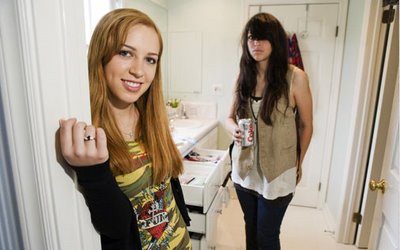 Expertly timed to premiere today, on so-called “Black Friday” when many parents rush to the stores to buy the latest must-have gifts for their sons and daughters is Lauren Greenfield‘s documentary Kids + Money. Greenfield is the photograher and author of the seminal Girl Culture, a book chronicling the reality of being a teenage girl in America today. Visit any filmmaker, screenwriter, production designer, of costume designer who has worked on a teen film and you’ll find this book on their shelf of reference materials. Next Greenfield made Thin, a photo essay and also documentary film about girls with eating disorders and their treatment. Now, Greenfield’s latest, Kids + Money, a well observed, smart and far-from-expected filmic look at the way kids navigate a world in which concepts of status and self-worth are tied to wealth and the ability to spend, premieres on HBO. The doc plays throughout the next three weeks on HBO and its schedule can be found at the link above on the HBO site or here on Greenfield’s site.

This 30-minute documentary short is an illuminating portrait of several young people in Los Angeles and the complex and intricate role that money plays in their lives. Ranging in age from 11 to 17, and spanning several socio-economic levels, thirteen kids (and a few of their parents) are interviewed in their homes, and discuss everything from their shopping habits and addictions, the importance of clothes and fitting-in at school, getting money from parents versus making their own money, and the overwhelming pressures of consumerism and image in LA.

A decade ago, photographer Lauren Greenfield’s monograph, “Fast Forward: Growing Up in the Shadow of Hollywood,” explored the way Los Angeles youth are affected by an overwhelming materialism that exalts image. One of the photographs from “Fast Forward” depicted Phoebe, a three-year old, lying on a couch in the Barneys shoe department. Now 16, Phoebe makes a return appearance in Kids + Money, newly sensitive to the adverse effects of affluence.

Among the other young people we meet in the film: 16-year-old Gabby, who says shopping is her hobby and sees fashion as a means of self-expression; 17-year- old Sean Michael, whose middle-class parents refuse to front the $700 a month he spends on clothes and shoes; 17-year-old Emmanuel, who addresses the politics of money at his private school; Matthew, a young actor who says he spends up to $300 a day at the mall; 17-year-old Zoie, who lives in a one-bedroom apartment with her parents; and others.

From an interview with Greenfield, also on the site:

I think we’re all taking a sobering look at our spending habits from the last years, and the way we used credit. I think kids often reflect the adult culture, and given what’s going on with the economy, it’s the perfect time for the film to, hopefully, inspire an examination of what our values have been. This film was a very specific conversation with these kids about money, which most feel plays a big role in their relationships and at school. And many of them are very critical of that fact. But a lot of young people are now approaching an era in which, for the first time, they will have to go without things they have come to expect. So maybe it is the perfect time to have a discussion about what has been called the “pathological state of material longing.

Cinematical has Greenfield’s site for a clip from the film and other info.