An Innovative Launch for Joffrey: Mavericks of American Dance 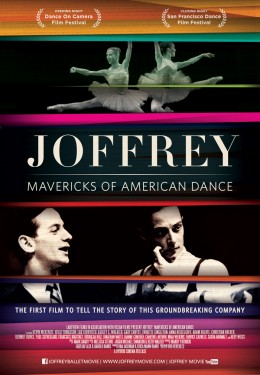 For the past four months, my company Hybrid Cinema has been working on the release of Bob Hercules’s new film Joffrey: Mavericks of American Dance, about the history of the Joffrey ballet. I will be writing a number of posts outlining the unique path that I and my partner on this release, Sheri Candler, have taken to release this documentary about the history of the groundbreaking dance company, The Joffrey Ballet.

In my book Think Outside the Box Office and in subsequent blog posts, I have written about the advantages and challenges of launching a film after its world premiere festival screening. Many filmmakers have complained that they can never recapture the exposure they gain with their first festival. As a result there have been a number of attempts to launch a film in some fashion out of a premiere festival. Orly Ravid writes in Selling Your Film Without Selling Your Soul about BassAckwards, which launched via YouTube Rentals during Sundance 2009. IFC has been running its Festival Direct program to provide a promotional lift to its VOD releases for several years. For instance IFC will premiere films at SXSW and follows it up with screenings in a few cities while it premieres day-and-date on VOD with the festival. Tribeca has started using their festival as a launch for a number of films that they distribute on VOD.

The chief advantage of using a world premiere to launch a film’s release is to condense all of the publicity into one window, thereby conserving precious resources and taking full advantage of press garnered via the premiere. The approach also utilizes the promotional muscle that many festivals can muster to promote the release. The principal challenge is being prepared – having all of the necessary tools and distribution and marketing channels lined up to take advantage of the promotion. In general this has been beyond the abilities of most independent filmmakers, who are just scrambling to get their films finished in time for their first festival. Another challenge is the short window of time that films have to get everything lined up after they receive acceptance to a film festival.

One of the first things we did for Joffrey was to target the Dance On Camera (DOC) film festival as a perfect launch for the film. It is not only one of the premiere dance film festivals in the United States (if not the world), it is also based in NYC – where the Joffrey Ballet got its start. It is based at Lincoln Center through the Film Society of Lincoln Center, one of the epicenters for culture in the US and the world.

Simultaneously I started speaking to Ira Deutchman of Emerging Pictures because I felt that Joffrey would be a perfect match for his network of theaters across the United States. For the past number of years Emerging Pictures has been simulcasting culturally-oriented films, many of which feature live Q&As. The Emerging deal is very filmmaker friendly with 30% of the box office going to the filmmaker if you pay $1000 for encoding, or 25% of the box office going to the filmmaker without any money upfront. Emerging takes care of all deliveries and collections from the theaters. Because of their ongoing relationship with theaters, Emerging is able to collect from theaters and in turn is able to pay the filmmakers.

I proposed to Deirdre Towers and Joanna Ney of Dance on Camera that through Emerging, we could be the first film to launch its release out of its world premiere, simulcasting to cities across the U.S. The partnership is also beneficial for Dance on Camera as it gets their name out in these theaters where ballet and dance fans will watch the simulcast and interact with the festival. It’s a winning situation for all which is what a partnership should be.

Emerging does not actually “simulcast” the screening of the film; the theaters download it in advance (hence no print costs), but the theaters carry the Q&A event after the screening via netcast. As important, people at the theaters around the country can tweet questions to the post screening panel in NY – so that they are actually participating in the Q&A, making it a national event. Once the film is on Emerging’s server they can book screenings of the film at a later date at no additional cost.

Currently we are screening in 42 cities throughout the U.S. to launch the release of the film. We will start selling six panel Digipak DVDs of the film at the premiere and off the website February 1st in addition to posters, 50th Anniversary photo books of the Joffrey Ballet and an eBook reprint of Sasha Anawalt’s book The Joffrey Ballet: Robert Joffrey and the Making of an American Dance Company (out of print for over a decade until this January 27th; she is launching her eBook to coincide with the launch of the film). We will roll out other merchandise over the course of the release. We will follow this up very quickly with digital DIY via Distrify in order to capitalize on the international attention we will receive from the publicity via the worldwide web. The biggest challenge has been to get the project ready to release in the short window since we found out we were selected for Dance on Camera. 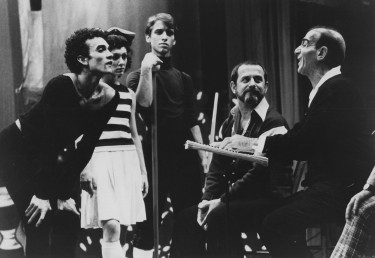 We have also been planning events throughout the United States that will run through the spring and potentially throughout the summer. Most of these events have similar Q&As with former notable Joffrey dancers – many of whom head established dance organizations in cities throughout the U.S. and are actually also coordinating the screenings in their cities. To start the process of the Los Angeles screening, I met with former Joffrey dancer Carole Valleskey who runs the non-profit California Dance Institute. We then sought the involvement of Leslie Carothers-Aromaa another Joffrey dancer who teaches at the Colburn School and helped secure the 430 seat Zipper Hall. We’re selling tickets for $20 a piece and are 1/3 sold out as this goes to press. These screenings will lead up to a day-and-date DVD and digital release by New Video (more on the timing of this in a later post) in June. To book and coordinate the rest of the events in the U.S., we brought on Liz Ogilvie and Paola Freccero of Crowdstarter.

The other type of event that we have wanted to set up from the beginning is to have a live ballet component to the screenings. This has turned out to be very difficult to set up due to either expense or theatres not being equipped with an appropriate, safe stage for the dancers. However the screening being set up by former Joffrey dancer Trinette Singleton in Allentown, Pennsylvania will have this feature and we are pushing for more.

A final note – one aspect of what attracted me to Joffrey: Mavericks of American Dance was the fact that Bob Joffrey and his partner Gerald Arpino were early artist entrepreneurs. They came to N.. with no connections to the established dance world, set up a dance studio to train young dancers and then toured the U.S. in a borrowed station wagon like so many indie bands and filmmakers.

Sheri and I will be writing a number of other posts about the various aspects of the release and marketing in the coming months – we look forward to your feedback.

Joffrey: Mavericks of American Dance premieres January 27th at the Dance on Camera Film Festival at Lincoln Center, NYC. Check the website for the cities where the January 28 live simulcast is taking place. The film was directed by Bob Hercules (A Good Man, Forgiving Dr. Mengele), produced by Una Jackman and Erica Mann Ramis and executive produced by Harold Ramis and Jay Alix.

Jon Reiss is a filmmaker, author and strategist who wrote the book Think Outside the Box Office and co-authored Selling Your Film Without Selling Your Soul with The Film Collaborative and Sheri Candler. He will be appearing at a number of panels at Park City this week and is a year round lab leader for the IFP Filmmaker Labs.