Over the last decade, Ava Duvernay has established herself as something of an indie renaissance woman.  An entrepreneur, distribution and marketing expert, and key player in the African American filmmaking landscape, Duvernay expanded her resume again in 2010 with her directorial debut I Will Follow, an intimate portrait of grief. Middle of Nowhere, Duvernay’s followup, centers on a woman (Emayatzy Corinealdi) forced to cope with the recent incarceration of her husband. 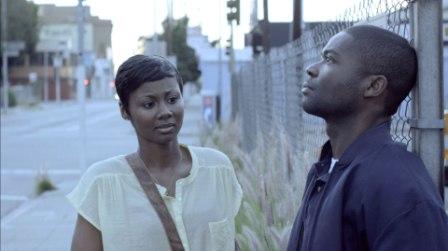 Filmmaker: Like I Will Follow, Middle of Nowhere tells a very small-scale, very intimate story.  What was it about these characters and this story that inspired you?

Duvernay: The lives of “women-in-waiting” always intrigue me. A person puts their life on hold – and how they break free of that and live their own life. I find that journey fascinating. The story of “Ruby” in Middle of Nowhere is really about a woman living inside a Langston Hughes poem, in a way. She’s living inside a dream deferred. A dream of what her life was meant to be, what her marriage was meant to be, what her career was meant to be. Through choices she makes, and choices made for her, nothing is happening as planned. Everything is put off. She’s in a middle place. Watching a character blossom from that place is beautiful to me.

Filmmaker: (Middle of Nowhere Director of Photography) Bradford Young has established quite a distinctive visual palette over the past few years.  How did you go about collaborating with him on this film’s look and style?

Duvernay: Brad is my brother first, and our collaboration was organic to our friendship. Our film’s look is us – two folks trying to push the black cinematic image forward. Both in narrative and visually. I don’t shy away from that and neither does he. Our skin tones are different, the light we attract through the lens is different, the way a sister walks up the street after a long day is different. And that’s okay. Let’s see the differences. Let’s see the nuances. Let’s see the shadows. Everything we did came from that idea.

I’m resistant to the idea of designing looks around characters. I want them to live where they are and for us to capture them as meaningfully as the moment requires. So we worked together to allow that freedom in the cinematography, but to still tap into the immobility of “Ruby.” Brad is a monster when it comes to handheld imagery. One of the best. But for this film, I was also interested in controlled movement. So it was a true collaboration to bring those ideas together. We were invigorated by the idea of creating fluidity within more still, smooth images. Still doesn’t have to mean static. He pushed himself to pull it off and he achieved it. He’s half man, half amazing. Bradford can do anything.

Filmmaker: You’ve worked in the industry for over a decade as a marketer and distributor.  Has your knowledge of the business side of filmmaking informed your creative process?

Duvernay: Oddly enough, it’s like two sides of my brain when I’m working as one or the other. When I’m writing, I don’t think about what sells. When I’m directing, I’m not thinking about how this is going to play when I get to distribution. In my creative moments, I become business dumb. On the other hand, when I’m in marketer/distributor mode, I find that side of things to be highly creative. You have to be able to break through the clutter, to get people to listen. You have to always bring a creative mind to business.

Filmmaker: You’ve been putting out films these past few years at a breakneck pace.  Are you already thinking about your next project?

Duvernay: I don’t think of it as breakneck. I think of it as working. I feel most comfortable with multiple projects brewing at different stages at the same time. If we didn’t have a minimum of 10 client projects at a time back when I ran my marketing agency, there was a problem in my mind. So, I get a little bored working exclusively on one project at a time as a filmmaker. It’s a blessing and a curse, I guess. So to answer your question, yes. I’m already thinking of the next project.