Storycode and Game of Thrones

All eyes may still be on Park City, but there’s still enough happening back here in the Big Apple to keep indie film lovers busy. One event was Tuesday’s presentation by Steve Coulson, Creative Director at the marketing firm Campfire, about the transmedia campaign he spearheaded for the first season of HBO’s Game of Thrones last year. The event  was organized by Storycode and hosted by the Film Society of Lincoln Center in the intimate Howard Gilman Theater. Because of the detail of some of his material Coulson asked that his presentation not be simulcast or recorded, but some of the overall lessons are still worth noting for indie filmmakers.

As a fantasy period piece, Game of Thrones was not the type of material HBO is known for. A big part of Campfire’s job, therefore, was to convince HBO viewers that the genre would fit in well with shows like True Blood and  Boardwalk Empire. At the same time, the Song of Ice and Fire books by George R. R. Martin had their own fans who would be very enthusiastic about the new show but also potentially protective of the original material as it was adapted to a new medium; they had to believe in HBO as a custodian of the characters and settings they loved. Finally, the brief from HBO required that the ad campaign not reveal anything about the many twists and turns in the series’ plot.

Campfire’s eventual solution was to launch a campaign that would evoke a memory of Westeros, the mythical setting of the series; this would bring new viewers into the setting without giving anything specific away, and it would prove to loyal fans that their world was in good hands. But evoking a memory of a fictitious world is difficult. The solution? To use the five senses. As actors certainly know, memories are often couched in sensory experiences; by using sight, sound, taste, touch, and smell, Campfire could create the aura of Westeros–and the entire Game of Thrones season one.

The resulting campaign ran in five parts, for the five senses, in spring 2011. As discussed in detail in this ARGNet article, Campfire enlisted bloggers and hardcore fans to spread the word. For smell, they sent a kit of aromas, specially designed by top perfumers, containing scents that evoked each of the different kingdoms in the Game of Thrones universe. We sampled scents like a grassland, a dirt crypt, and pear brandy from a tavern. 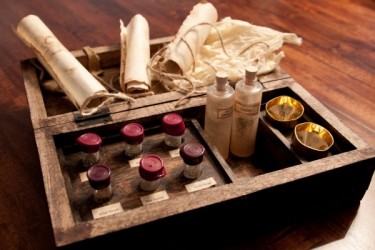 For hearing, a webpage of a tavern was created using binaural recordings (stereo microphones in ear-shaped encasements) of snippets of conversations–kingdom gossip and the like. For sight, another page had a recreation of the the massive wall that stretches along the kingdoms’ northern border that visitors could navigate like an arcade game. Touch–or feeling–had an app that matched the user’s local weather with similar weather in a Westeros location: if you used it in the rain it would give you information about a place in Westeros where it was raining; warm sun may invoke the temperate southern kingdom, and snow the frozen north. Finally, taste used a series of live events, a food truck with chef Tom Colicchio of Top Chef fame, where he created menus based on the diets of the shows’ different civilizations. George Martin was actually very detailed about the food in his books, and at least two Game of Thrones food blogs–one with a forthcoming cookbook–sprung up in the wake of these events. This also gave a final push before the show’s premiere, bringing fans physically together and garnering national press thanks to Colicchio’s involvement. Here’s the truck at Union Square. 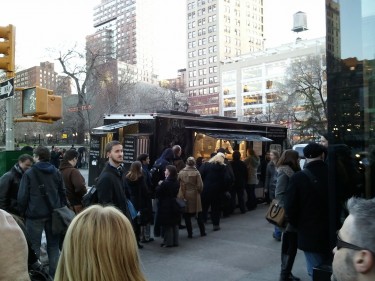 All of this greatly expanded HBO’s audience for the new season, which reached 8.7 million viewers, and along the way hardcore fans were also offered a series of puzzles, embedded in each phase, that allowed them to advance along the “Maester’s Path” and unlock footage from the shows. The site is still live at http://themaesterspath.com and is well worth exploring. Social media was included throughout the campaign, and one important component of mastering the Maester’s Path was recruiting five other users.

Along the way Coulson learned several lessons he shared with us. Some include:

* In an increasingly digital world, physical objects can surprise and delight.

* Use live events to congregate communities.

* Use the community you’ve created to reach out and expand the community; deputize them by allowing them a creative role.

* Be like “old Lego,” which let users determine what to create out of their blocks, rather than “new Lego,” which predetermines what each set is designed to build. Create the materials and give users free range.

* Everything you need to know about marketing you can learn from magicians, the technique they use to tell a story/perform a trick.

Lots has been written about this campaign and the series, and it’s worth looking at. In my mind, though, as exciting as anything discussed about Game of Thrones is the launch of Storycode itself. This organization started out as a Meetup group for New Yorkers interested in transmedia and under the guidance of Aina Abiodun and Mike Knowlton it’s been expanding throughout 2011 until it’s now ready to leave the Meetup aegis and branch out on its own as an independent nonprofit. As Simon Pulman discusses on his blog Transmythology.com, this could be a really big step for transmedia in the New York region, and nationally. The organization’s first hackathon is in the immediate future, and with events and networking opportunities like this one, Storycode promises to be a great way for filmmakers to meet technologists and other digital storytellers. The complete website isn’t up yet, but there is a placeholder, and interested people can get more info at the current Meetup webpage.