A SHORT FILM PRODUCER AT SUNDANCE

Writer, director and producer Edward Boyce sent us this blog post about his experience attending Sundance this year as the producer of a short film.

I’m four days into my life as a Sundance anointed short film producer. I’ve felt obliged to schmooz and glad-hand so much that I feel like a reluctant student-council candidate. And good luck trying to wash off some of the weird tinsel-slime that seems to linger on the fringe of the artistic core at Sundance. (Festival resolution #12: never willingly enter a “gifting suite” again.) 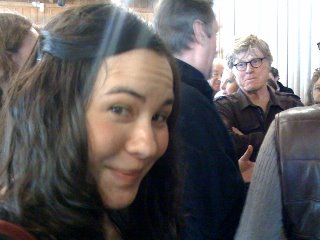 It’s a big deal and it’s no big deal. As one festival programmer stressed during her introduction to the Shorts Program IV that I saw on Friday, “You really need to understand what an accomplishment it is to get a short accepted to this festival.” She recited the numbers I’ve now become familiar with: over 5000 shorts submitted, fewer than 100 accepted. Yet as a producer of the Sundance feature The Greatest just remarked to me as we shared a power outlet in the Sundance Filmmakers Lodge: “I’ve produced three shorts at Sundance, and nobody wants to talk to you as a shorts producer. A short is about the directorial debut.”

Ouch! I suppose this is mostly right. And yet kind of a good thing for a production team as tight as ours. It feels a bit like our director, Doug Karr, is gathering some career rocket-fuel and our producers and crew are upgrading the ship, talking shop with the other mechanics. I’ve met some very talented producers who have helped explain the lay of the land a bit: who the deal-makers are, what to expect this time around.

Did I mention that Sundance is a class act? It feels like Redford’s original vision still permeates the waters. The coarse froth of the social scene quickly resolves itself into a number of distinct strata. The top is not necessarily mixing with the bottom. Yet filmmakers are clearly protected, even moderately exalted and given many opportunities to create new friendships with their peers. The programmers are excellent people. Super film nerds. But nerds with power! They seem to be these cinematic mother hens trying to give their nascent, upward looking chicks a nice meal before they maybe fly off into the blue sky or fall straight out of the nest to the ground. More on the films I’ve seen and all the top-notch filmmakers I’ve met in my next post.

It’s generally chill enough here that I felt emboldened to chat up Spike Lee in the filmmaker’s registration area. He’s here with his documentary Passing Strange which is linked to the Broadway musical of the same name. I wrongly assumed he’d been here before but in fact it was his first Sundance. He was in a good mood; he had just visited Robert Redford, he was premiering the next day and then was off to DC for the celebrity world hot-ticket that seems to be solidly competing with Sundance this year.

Although Main Street’s foot-traffic has picked up a lot since I arrived, everyone agrees that it’s a little light. Three often cited factors seem to be thinning the ranks: Obama’s inaguration, Bush’s economy, and the Mormon’s support of Prop 8.

We premiered Saturday night before the feature Victoria Day. It went really well. A full house at the Egyptian and our film was apparently a lot funnier than we ever knew. Big screens and big crowds: intoxicating. Three more Sundance screenings and tomorrow we’ve been invited to screen for an audience of Park City High School students; we’ll see what the kids have to say.

If we can keep our director from running more red lights (already pulled over once, he somehow charmed his way out of a ticket with his credentials), and keep the 22 Canadians we have housed in a mansion on the hill all fed and plied with drink, then this week should just keep getting better.

Edward Boyce is a writer, director and producer. Ten For Grandpa is in the International Shorts Competition at Sundance 2009. www.tenforgrandpa.com