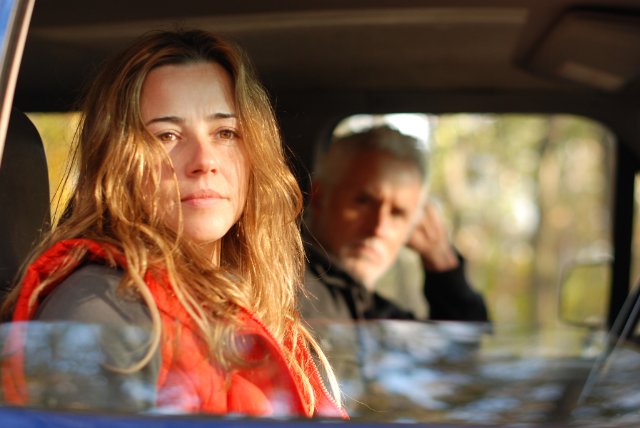 by Brandon Harris
in Director Interviews
on Feb 8, 2012

A low-key drama that articulates the ennui of a returning servicewoman after a tour in the Middle East, Liza Johnson’s Return strikes a delicate balance between familial melodrama and suffering vet pic. Light on exposition and heavy on expert thesping, it features a striking performance by Linda Cardellini, once the most sly and attractive of the awkward high schoolers on Freaks and Geeks, and now a fully mature screen actress making the most of her copious talents. We meet her character Kelly at the airport, freshly arrived in Ohio after a stint in an unnamed theater of war, and only slowly begin to understand the broad disconnect she has with her plumber husband (Michael Shannon) and two young girls.

Unable to adjust to life at home, she doesn’t exhibit the classic PSTD symptoms, but an underlying sense of purposelessness and dissatisfaction overcome her in their modest house and at her job in a warehouse. As her indulgences in swearing, drinking and loud rap music grow into a larger inability to maintain social affability in nearly any context and her awareness of her husband’s activities in the year she’s been away comes to fruition, Cardellini’s Kelly must figure out whether there is any longer a home to be salvaged, or simply a place as alien as the desert she may secretly yearn to get back to.

Helmer Johnson is a multi-dimensional artist who has worked as a professor and curator while making a series of acclaimed short films. Her short film South of Ten was the opening night short at the 2006 New York Film Festival, and her gallery work and installations have been exhibited at MoMA, the Walker Arts Center and the Centre Pompidou as well as major European film festivals such as the Berlinale and Rotterdam. Her feature debut Return, which had its world premiere at last year’s Director’s Fortnight in Cannes, opens this Friday. Filmmaker: A lot of your short work features non-actors. How did the experience of working with trained performers alter your working methods?

Johnson: For the last five years I’ve been making these projects with non-professional actors. Also known as “real people,” or whatever. [laughs]

Filmmaker: Actors are real people too.

Johnson: Yes! So I’ve been working with groups of people in what you could call a documentary environment. I shot one in rural Mississippi after Hurricane Katrina and I shot one in the town I grew up in, which is in Southeastern Ohio, which is also where Return is set.

Filmmaker: What town is it set in?

Johnson: Oh really? I should have noticed you have a sort of pleasingly solid Midwestern quality about you. [laughs] I just shot one which will be in Berlin next week. I shot it with a friend of mine in Northern Australia with a community of people she’s been working with for a long time. Those are all movies that we consider to be “movies with plots that are to be acted,” you know? But because they’re set in documentary environments, shot in a documentary fashion, and because it’s everyday people doing the acting, we don’t consider them documentaries. But I understand why people view them like that sometimes.

For me this film was a very organic one grown from those [other] projects, which were shot with reverse angles and multiple takes, but this time out I wanted to tell a longer, more sustained story for one character. And I really felt since I began writing it that it was most appropriate for a super trained, really experienced actor who could put that role together and sustain it for the course of the whole film.

Filmmaker: What then led you to Linda Cardellini? Had you seen her work on TV, or some of her small roles in other films? You coaxed a watershed performance out of her.

Johnson: Two things really. First meeting her she was very warm and outwardly focused, which I thought was really important for this character. She also viewed the character and the story in the same way I did, and I thought it could work. Also people think this is funny because when I met her I had seen her in Freaks and Geeks, I had seen her in Brokeback Mountain. Do you remember that role?

Johnson: It’s very wonderful, she’s very memorable even though it’s a very small role. I hadn’t seen her on ER, so I thought I better see some of her work after I met her. This friend of mine was like, “Oh my God, have you seen Scooby Doo 2?” [laughs] It’s a very, um, different movie than Return, but… have you seen it.

Johnson: She’s really wonderful. You can really see that she put in the effort to create this character. It’s a comedy and it’s very physical, and she projects her character without words very well. It’s a physical comedy sort of project. I just thought, “If she can do that, she can do my movie,” which people think is funny since my movie is so different from that movie. You should watch it because she’s awesome in it. [laughs]

Filmmaker: I’m adding it to my Netflix queue as we speak. Seriously. So was she the first person on board?

Johnson: That was my intention, to cast around her, but actually Michael Shannon was the first person to read the script, and he was into it. I just thought, “I don’t see how this can be bad,” because he’s such a tremendous actor. I took it as a way of amplifying the challenge of finding the Kelly character. In addition to being that sort of warm, outwardly directed person, I also thought she had to be able to give it back to Michael Shannon. So Linda was the second person that we cast.

Filmmaker: One of the things I found unusual about the story in the context of “returning from the warfront” narratives is that you didn’t feel the need to exposit what this person had experienced nor does she attempt to make it an excuse for her behavior at all. Her constant refrain is, “A lot of people over there had it way worse than me,” or something to that effect.

Johnson: I started writing it because a friend of mine was telling me how hard it was to describe his experiences and feelings to his wife and how hard it was to stay married because of that. I feel like in this genre it’s more common that you’d have some flashbacks to some acute traumatic war experience and the problem that my friend was telling me about was that if he could show a flashback of his experience to his wife, then maybe he could have stayed married. The problem was that he couldn’t find a way to cross that gap. I thought that if we were really going to feel that gap, it would be better to withhold that. It’s an understandable desire to translate your experience that way, but sometimes you really can’t. Also, I think a lot of people really do have those acute traumatic stories to account for when they come home. There’s a reason that is a genre. My understanding is that it can be dislocating and intense to return to your life with a new perspective, even in the absence of that kind of story. That feeling of dislocation, of seeing things in a new way, doesn’t actually have to be justified by that kind of acute trauma story, even though it frequently is.

Filmmaker: She doesn’t immediately exhibit PSTD symptoms, but more this genre sense of disquiet and dread. I thought that was so much more authentic then the stereotype of the unhinged vet we see in a lot of these kinds of pictures about the aftermath for the soldiers who fight America’s modern wars.

Johnson: Thank you. For better or worse, one thing about working for the military is you do have a sense of meaning and purpose. In that type of town where I grew up and where the film is set, there is a real shortage of meaningful work, for one thing. There are other practices that can be amusing, that I personally am capable of enjoying, like children’s cheerleading. If you get into children’s cheerleading, it’s cool. But I can also understand how if you have been in a different kind of world with a heightened sense of purpose, you might have lost the thread of why children’s cheerleading is cool.

Filmmaker: Did you interview female vets?

Johnson: I did. I met a lot of women, people who had come back from their deployments. Through my friend I met a lot of women who were able to introduce me to more people. Not like a scientific study, but just gathering anecdotal stuff. I guess the first thing I really noticed is that all the women I met were truly different from each other. Almost right away I felt like I had to commit to making Kelly a very specific person. If there had ever been any temptation to represent the typical female soldier, that was defeated right away by actually meeting a bunch of female soldiers because person for person everyone told me really different reasons for why they joined the military, what their experience was like and what was it like coming home. Person for person, everyone had really different accounts with some common themes occasionally, but there was no way Kelly could begin to represent all the people of her “type.”

Filmmaker: Did you shoot in Ohio?

Johnson: We actually ended up shooting in Newburgh, New York, which looks and feels a lot like where I grew up in Ohio; they’re actually both de-industrialized river towns. The built environment really does look similar. So definitely it helped me pick that location. It looked like where I grew up! In the work I’ve done previously I’ve relied a lot upon the accidents of location, where there’s a lot of funny textures or real things that are in the frame. I guess in a way this is more of a hybrid thing where the location does infuse the film with some meaning, but they’re definitely redressed and organized by the art department. That was a new thing for me actually, to figure out how to let intriguing surprises come into the film when the location was much more planned and the sets much more dressed than anything I had ever done before.

Filmmaker: Do you find much hope at the end of the story? Will her life ever have a modicum of normalcy to it again?

Johnson: I think there’s a lot of hope. I guess the thing that I want for the film is that when you’re in between and having trouble negotiating your circumstances, when you’re having trouble returning to your old life but haven’t forged a new one yet, you just don’t know what is going to happen and you don’t know how long it’s going to go on. I guess for people that I’ve now been friends with for some time now, I’ve definitely seen that situation go really well and occasionally go much worse than it does for Kelly. I wanted to situate the whole story in this in between time. On the one hand it’s sort of a painful time to be in but on the other hand it’s sort of an expansive time because you don’t know how you’re going to make your future. So it’s an expansive opportunity, but it can be very painful.