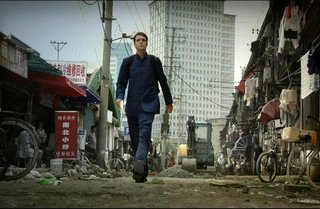 The winners of the SXSW jury and audience awards were just announced and Judi Krant‘s Made In China (pictured right) was awarded Best Narrative Feature while Bill Ross‘s 45365 took home Best Documentary. Another standout is Scott Teems‘s That Evening Sun which won a Special Jury Award for Best Ensemble Cast and the Narrative Audience Award.

Honorable Mention – The Way We Get By
Director: Aron Gaudet
On call 24/7 for the past 6 years, a group of senior citizens transform their lives by greeting nearly one million U.S. troops at a tiny airport in Maine.

NARRATIVE FEATURE
Winner – Made in China
Director: Judi Krant
Lost in Shanghai, an inventor discovers that it takes more than a bright idea to succeed.

DOCUMENTARY FEATURE
Winner – MINE
Director: Geralyn Pezanoski
After Hurricane Katrina, thousands of pets were rescued and adopted by families around the country, leading to many custody battles. Through these stories, the film examines issues of race, class and animal welfare in the U.S.

NARRATIVE FEATURE
Winner – That Evening Sun
Director: Scott Teems
A ruthless grudge match between two old foes. Lines are drawn, threats are made, and the simmering tension under the Tennessee sun erupts, inevitably, into savagery.

SXSW / CHICKEN & EGG EMERGENT WOMAN AWARD
Winner – Made in China
Director: Judi Krant
Lost in Shanghai, an inventor discovers that it takes more than a bright idea to succeed.

REEL SHORTS
Winner – Thompson
Director: Jason Tippet
Since second grade Matt and Ryan have shared the bond of speech impediments, weapons, and things that go fast. But as their last days of high school speed by, the two friends find that their go-carts, dirt bikes, and RC cars can’t outrun adulthood.

ANIMATED SHORTS
Winner – Shaman
Director: Luc Perez
Waiting for the bus on a rainy day in Copenhagen, the old shaman Utaaq sees a rare bird from his past. This makes him reminisce his youth, and a beautiful tale about the forces of nature begins.

Special Jury Award – Sweet Dreams
Director: Kirsten Lepore
A Stalwart cupcake escapes from his native land to discover what lies beyond the sugar skyscrapers and candy-condos. His violent shipwreck on a foreign shore forces him to adapt to a new lifestyle.