SXSW FIRST PERSON: THE EYES OF ME DIRECTOR KEITH MAITLAND 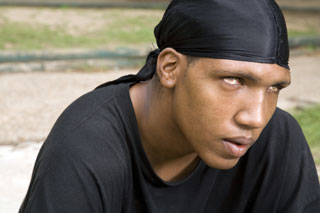 A couple of weeks before the festival, Filmmaker reached out to directors with films in the festival to offer them space to recount the making and mission of their movies. Below is a response we received from Keith Maitland, whose documentary, The Eyes of Me, premieres at the festival today.

How do they see the movie, if they can’t see at all?

The Eyes of Me follows four blind teens over the course of one dynamic year at the Texas School for the Blind in Austin, TX. I didn’t know much about blind people before I decided to dive into their world and make the film, so naturally, I had a lot of questions to answer … and apparently so do a lot of other people out there. This week at SXSW, host to The Eyes of Me World Premiere, I’ve talked to film fans, the press and lots of other filmmakers and a question that keeps coming up is “Why make a movie about blind people, if they can’t see it?”

In the almost four year journey that has been The Eyes of Me, that question never came up because from the moment I started working with the amazing kids in the film, I realized that blind teens are still just teens…and they like things that all teenagers like – including movies (and television) – in typical, teenaged, heaping quantities.

When Chas, a blind high school senior complains, “I can’t even watch Family Guy, you know how that affects me?” it’s not because he’s blind, that he can’t watch his favorite show, it’s because he hasn’t paid the utility bill and his electricity was cut off.

There is a step that we can take as filmmaker’s interested in making our work more accessible to blind audience members, it’s called Audio Description. PBS has lead the way, requiring many projects to provide an audio descriptive track for the visually impaired. Typically, Audio Description is a simple set of narrated facts to fill in some of the info that’s delivered visually – They ride into the sunset; A tear rolls down her cheek — you get the idea. At SXSW, I’m very excited to premiere the use of Live Audio Description for The Eyes of Me. Through use of wireless headset receivers, additional scripted info is transmitted live, by a real person, in the back of the theater.

Back to that question though… here’s the simple answer: Blind people watch movies. They go to movies, they hear them, they experience them & when made well, they feel them deeply… just like you.

SXSW will present the World Premiere of The Eyes of Me on March 18th, with an encore presentation on March 20th. We’re next slated to screen in competition at AFI Dallas in two weeks and I’m happy to report that we will be screening at the Little Rock Film Festival in May. Hope to see you on the festival circuit!

–Keith Maitland
Producer/Director/Editor
The Eyes of Me