CALL ME BERLINALE: A KUCHU CHRONICLE

by Malika Zouhali-Worrall and Katy Fairfax Wright
in Filmmaking
on Feb 17, 2012 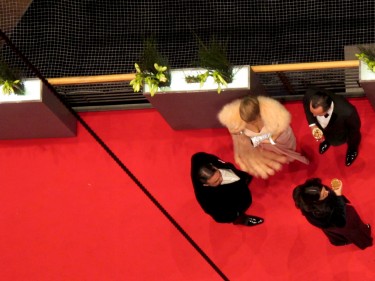 It’s opening night of the 62nd Berlinale, and we’re tottering down the gleaming red carpet, tipsy with exhaustion after a marathon three-week final push to finish our documentary Call Me Kuchu for its world premiere at the festival.  The black tie affair has women dripping in mink and jewels, and men tightly bound in waistcoats and cummerbunds. Just 48 hours prior, we were dripping in sweat and bound by a serious time crunch as we raced to the airport, gripping two newly-minted HDCAMs, still toasty-warm from the tape deck.

Our run at the Berlinale marks the culmination of two years documenting the work of Uganda’s first openly gay man and activist, David Kato, who was brutally murdered midway through our shoot and just weeks after winning a landmark lawsuit in Uganda’s High Court. The film closely follows Kampala’s LGBT activist community, so we felt it was crucial to have someone present at the screenings to speak for the kuchus. After weeks of nerve-wracking uncertainty trying to wrangle visas and travel permission, we were able to do just that – Naome Ruzindana, an LGBT activist, a key player in the film and a good friend, joined us in Berlin just in the nick of time before the premiere.

Walking into the theater, Naome’s eyes widened with ours as we passed a line of Berliners hoping for eleventh hour entry to the sold-out screening. We settled into our seats, and gave each other a quick hand-squeeze as the lights went down.

When the lights came back up, we were invited down to the front of the theater with our composer Jon Mandabach and Naome, who followed a few steps behind. As she stepped in front of the audience the applause swelled significantly and she gave an outstretched wave with a sheepish grin. 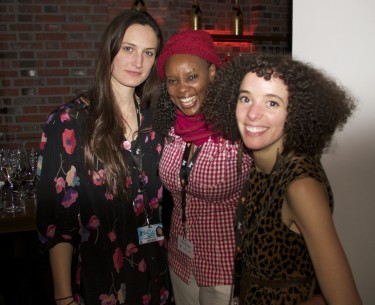 After eons of friends-and-family-only screenings (the only dedicated souls willing to sit through a three-hour cut) the eager responses from the crowd of strangers was a welcome kick-off to the dialogue we hope this film will launch. As we discussed how the Anti-Homosexuality Bill, which David fought tooth and nail, was reintroduced in Uganda’s Parliament just last week, the audience’s responses became increasingly impassioned. Sentiments peaked when a woman raised her hand to state that the Ugandan opposition to the LGBT movement in the film had her wanting to reneg on her pacifist ideals.

As we walked out of the theatre, Naome wrapped her arms around us. “You guys have really done something big!” she gasped. We grinned. It was a relief to hear this from one of the kuchu activists, many of whom would raise their eyebrows whenever we’d return to Uganda for another shoot. “You haven’t finished yet?” they’d tease.

At the Panorama reception the following day, Naome was greeted as a celebrity. But the unmistakable highlight of the evening was when we introduced her to Rose Troche, who has written, directed and produced multiple episodes of The L Word, a DVD staple for the community in Uganda. Naome was tickled pink, and Rose’s eyes welled up as they spoke.

Our screenings at the Berlinale were affecting for all three of us, but especially for Naome, who was confronted for the first time in over a year with images of her late confidant.  Each screening triggered another cluster of memories of David – courageous activist and dedicated friend – fighting, philosophizing, laughing. But above all, we felt assured that at least with Call Me Kuchu, the world can now know that David too.  So thank you Berlinale!