by Nicholas Rombes
in Columns, Filmmaking
on Mar 2, 2012

1. Jeffrey, just after the kiss with Sandy, is on his way up the dark, industrially-vibed staircase to Dorothy’s apartment. He has had his chaste kiss; new he wants more. He is hungry for Dorothy, who dispenses with shy-girl playfulness and gives Jeffrey the Real Thing.

2. The blackness of the frame. The amount of screen space dedicated to the experience of no visible light. There is light, of course–just enough–but Jeffrey travels in these moments mostly through the dark.

3. In He Died with His Eyes Open, the first of Derek Raymond’s British crime noir Factory series novels, the unnamed Detective Sergeant has a terrible dream that remotely echoes Jonathan Edwards’s famous 1741 sermon “Sinners in the Hands of an Angry God.” He is prone to such dreams, which seem somehow to clear the way for him to face the brutalities of the waking world:

I dreamed that far below me, under the walls of a ruined fortress, there was a field faded brown by drought with rocks lying in it. I was abroad somewhere—somewhere that smelled—and sitting on a terrace that I suddenly found was made of rotten canvas. My legs dangled over the edge and my feet were so far from the ground that my soles tingled. . . . Then the whole structure yawed, swayed and fell devastatingly away; I screamed as I feel toward the field with the rocks in it.

4. The steel and concrete passageway that Jeffrey takes to Dorothy’s apartment is one of the recurring spaces in the film where he is truly alone. A sanctuary, of sorts. A place for him to think.

5. The blackness, also, in the frames of Lynch’s short film from 1968, The Alphabet. 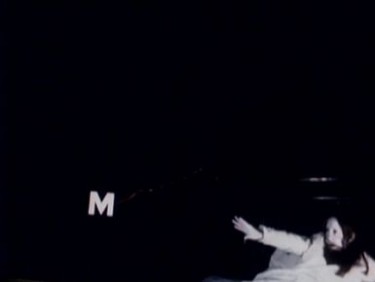 The letters appear, individually, as free-floating signifiers, in the dark, out of reach of The Girl (Lynch’s then-wife Peggy). In her own way, The Girl is also a detective, trying to solve some existential problem that has to do with language. The real horror in the frame may be not that The Girl is trying the grasp the letter M, but that she is trying to keep it away. Both meanings are possible. In Blue Velvet, the terrible truth that Jeffrey seeks is also just out of reach, and also just close enough to destroy him.