Film festivals encourage connecting dots that don’t necessarily exist, a logical by-product of seeing four films a day. In covering this year’s installment of Columbia, Missouri’s True/False Film Festival (a lovely documentary festival whose actual atmosphere I’ll discuss in the next post), I’d like to accordingly divide the films into two broad categories. In the second post, I’ll talk about (very loosely/speciously categorized) personal, dewy stories of love; in this initial dispatch, I’d like to discuss films which look at lives regulated by top-down political decisions and climates. 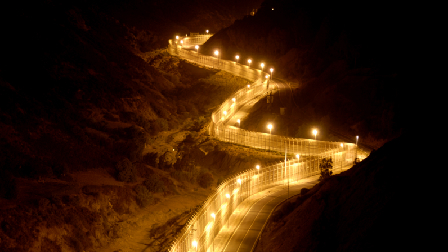 The most obvious example is Nikolaus Geyrhalter’s staggeringly well-controlled Abendland (“evening land”), a nighttime excursion (though it’s so often indoors this isn’t obvious) across the sick European continent. Like fellow Austrian moralist Ulrich Seidl, Geyrhalter despairs morally and politically, and he isn’t afraid to film ugly situations with a clear, static eye. As in his last two films — Our Daily Bread and 7915 km — people’s daily routines are dictated by corporate concerns beyond their control. Bread was about mass-scale food production, 7915 examined a trans-African racing event’s unpleasant foot print on the villages it passes through.

Abendland’s subject is nothing less than every possible situation in which large numbers of people are sorted, organized and supervised. The situation can be as intimate and laudable as the labor of nurses in nursing units for premature/damaged babies (an incredibly hard-to-watch sequence full of seared red flesh and bodily deformations), or as infuriating as watching London’s supervisors idly use their CCTV cameras to spy at-will on anyone on the street.

In the opening scene, a camera awkwardly lurches 360 degrees on top of a van, a seemingly uncontrolled technological element in entropic action. It’s controlled inside by a man wielding a slightly awkward joystick: he’s looking for people, though all the pristine night-vision brings up is a rabbit. The gap between the man’s micro-hand movements and the massive implications of what he’s doing reminded me of Harun Farocki’s Serious Games I-IV., split-screen installations of American soldiers recounting their war experiences to help built PC-ish simulations for training and other examples of the military acting with a seemingly total mental disconnect between fatal act and bloodless depiction. Geyrhalter’s dissecting eye is similarly humorless, didactic and hypnotic; the things that make him angry, or at least skeptical, are legitimate subject for concern.

The man’s survey of a deserted field yield no illegal immigrants: this preoccupation with rooting out alien migrants is a recurring motif. In the next scene, a Mauritinian settlement camp organizes its dispersal so the Italian government can come in and bulldoze the settlement: the devastated landscape — water spraying from a torn-up pipe somewhere, dust floating over a living space turned to garbage — is apocalyptic. Later, an immigration counselor advises a Nigerian whose application for (apparently British?) residency has been rejected. The Nigerian notes without protest that his country’s president is dead and civil war will almost certainly erupt; given six months of calm, he’s willing to go home, but in the meantime he isn’t asked (and doesn’t volunteer) whether he’d rather be an illegal refugee than a legal citizen of a war state. Towards the climax, Italians patrol their border with Morocco, shining a flashlight over obviously inactive fences.

The scale of the crowd scenes is staggering. At a European Parliament sub-committee meeting, the babel of three translators’ voices form hypnotic overlapping patterns, a trick Geyrhalter keeps repeating. He’s a fan of blunt, juxtapositional edits, cutting from the immigrant camp’s meeting about their dispersement to fragile, barely-living new babies. One member of the Parliament meeting fumes over “the increased militirisation of several aspects of social life,” which the film handily demonstrates. The surveillance state is the norm, with random British flunkies scanning their CCTV cams like so many VYou channels, but true subservience comes from within: the virtuoso final shot — a handheld, Steadicam-smooth trek through a massive electro party’s floor — invites every person who gets passed to act the fool for the record. Internalized reflexes are the most insidious, whether cultural or narcotically induced. 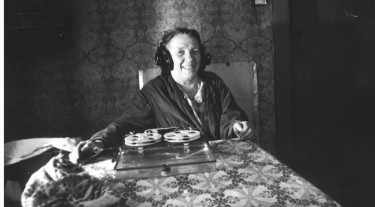 So too with Victor Kossakovsky’s 1993 film The Belovs, the kind of hour it’s worth flying half a day for. Imagine The Turin Horse as a comedy: brother and sister live together by the river, each day a cyclical repetition of the last. (Yes, there are potatoes.) Misha gets drunk and rails about ethics, the evils of Soviet bourgeois thought and how he’s going to kill his sister; Anna whines about getting up at 6 am every day to milk the cows. Their mutual abusiveness is hilarious (and briefly terrifying when Misha threatens to crack a near-empty bottle of vodka on his sister’s skull), the rhythms drunkenly unpredictable. Hell is a place where every conversation is a nonsensical, non-responsive exchange of statements that don’t respond to each other: she’s trying to talk about worklife while he’s explaining how Boris Yeltsin’s burdened with unrealistic expectations.

Every instinct is animated by pure spite. Early on, the family dog leaps to unbelievable, Yao Ming heights trying to eat a hedgehog. (Animalistic behavior for everyone: at one point, Anna complains that her long hair makes her look like a “bearress.”) The tragedy is that Anna’s absolutely correct when she protests that she and her brother are “just ordinary people”; the point is that, for all their freakish behavior, they’re behaving like stereotypical Russians, unconsciously exhibiting ingrained pathologies. What makes the film spectacular are its jet-black sense of humor — this cyclical verbal abuse is hilariously over-the-top — and its confounding but intuitively effective authorial interventions: a crucial confrontation suddenly loses sound, while there’s no precedent for the hilarious impact of a long scene of Misha trying to outrace his dog (to Cuban song accompaniment) on a tractor. Given how obscure Kossakovsky is in the US — none of his films have received proper theatrical release, and there are no DVDs — showing this to honor him(along with showing his newest film, Vivan Las Antipodas) is a public service. 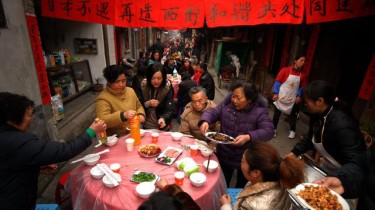 Xun “Fish” Yu’s debut The Vanishing Spring Light is the first of four proposed portraits of Dujiangyan, a city in the Chinese province of Sichuan about to undergo what the opening titles skeptically label “grand gentrification.” Grandma Jiang bought a house there in 1960 for 450 yuan after being forced out of her hometown by the construction of a train tunnel; soon, the residents of West Street will have to move on for “renovation.” Her whole life has been directly affected by government fiat: after Deng Xiaoping began opening up China to limited capitalism in 1978, Sichuan was one of the first provinces to get the greenlight, and Jiang’s glory years saw her running a food store and scalping premium movie tickets.

Grandma Jiang won’t survive to be forced to move again: at the film’s beginning, she’s taken a fall and her health is shaky. “I wish that fall killed me for good,” she complains. “To die is to be free…free of all this.” Indeed, neighbors maliciously speculate that maybe she fell on purpose to try to die, but no such luck: her three surviving daughters (one died years ago) work far away and pay her no heed, leaving only son Xiang to try to look after her. “A good son…this title bears too much,” he complains in a drunken fit. His wife runs a mahjong parlor on Jiang’s premises and reluctantly takes on the role of care-taker when the daughters don’t step up.

Death is not the end, Jiang believes as a Buddhist, and it’s not the end for this film either: in life, Jiang complains that her children never invite her to eat out with them (they won’t cook for her either), and the final bitter irony is that the film’s biggest feast is her wake. Before and after her death, the constants of life remain the same: nationalistic blather on the TV, the clicking of mahjong tiles in the parlor and the ever-looming prospect of top-down mandated change. (“She died just before my displacement,” a neighbor muses. “Good timing.”)

Yun could stand to learn a few things about editing: when he does insert a shot to break up a potentially dull scene, the gloomy gray sky Jiang’s staring at doesn’t match the bright-blue cloudless expanse that’s actually over her head. Conversely, Jiang’s long bedbound decline gets nothing to break up her recitation of the pains of being a prisoner of her body. Cutting in a shot in the middle of the view of her bed — the ever-present mahjong players visible through a window over a mound of pills on top of a dresser — rather than making it a separate, uninterrupted sequence would’ve gone a long way.

Vanishing is by and large master-shot rigor done right. On the street, Xun’s camera leaves a small diagonal space for the actual roadway to slice through a small part of the image’s right side, with mopeds zooming by and the stories of his proposed other three films about West Street suggested in background figures. Inside, glimpses of state-run TV articulate the underpinnings of what’s happening the characters don’t even think is worth is discussing. The clash between unevenly-executed transition to modern capitalism and tradition is rivetingly dramatized at Jiang’s funeral, where a man shows up to conduct traditional rites the family doesn’t know. “The family enters the Memorial Hall — please pay attention — with tears in their eyes,” he says. It seems like mockery of the daughters’ indifference — but minutes later, they’re bawling. Death, gentrification and mahjong: some things recur eternally.