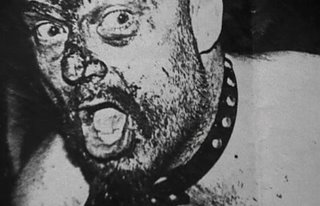 The trajectory of careers can be pretty fascinating. I remember when G.G. Allin was a Lower East Side punk rock performance freakshow, cutting himself on stage, fighting with audience members and threatening/promising to kill himself during one of his performances. Todd Phillips was attending NYU Film School at the time and while a junior there made his debut feature, a documentary portrait of the performer entitled Hated: GG Allin and the Murder Junkies (1994). He also, with Andrew Gurland, founded the New York Underground Film Festival, would go on to make with Gurland the controversial college hazing doc Frat House (1998) and then, just two years later, would make the very successful comedy Road Trip. There was also Old School (2003) and now, of course, The Hangover, which is shaping up to be one of the summer’s biggest hits (and probably the most profitable one).

In an interview with Erin Broadley at Suicide Girls, Phillips discusses how the seeds of his filmmaking can be found in Hated.

EB: Well, you also talked about how with documentaries you almost have to create characters as well. What were some of the problems or strange rewards you found with the Murder Junkies crew, developing the characters within the bounds of this documentary?

TP:I think what I meant was that, to me it was never a big leap to go from documentaries to features. I think a good documentary has a beginning, middle and an end. A good documentary is storytelling and has character development so you know, in this film, in Hated it was the same thing, it was like, okay, you build your movie around your main character GG but you have this sort of circus that follows him around…like Unk the fan or the ex-guitarist who’s thrown out of the band. He’s sort of the antagonist of the film.

TP:Yeah, and you kind of just let stuff come out slowly just like you would a regular narrative film. I don’t think Hated does it flawlessly because there’s not too much of a narrative thread through it. But a movie like Some Kind of Monster they do do that so perfectly and when it’s done in a documentary, to me it’s just the best.

EB:One thing you are noted for is the level to which you are right in there in the action, participating in your documentaries. Where do you draw the line between being a filmmaker and becoming too much a part of your subjects’ lives?

TP:For me, I grew up watching Nick Broomfield documentaries. You know Nick Broomfield? He did a great documentary about Heidi Fleiss. He did one about Aileen Wuornos. Yeah, Nick Broomfield — he’s like Michael Moore even before Michael Moore, but not so much political, more just character [driven] pieces. This was very much our approach with Hated and the movie I did after that called Frat House. I don’t know if you’ve seen it. That one takes that concept even further. To me documentaries are basically about the journey, not the destination. So much about the documentary journey is the process of making the film and you see a little bit of that in Hated and much more of that in Frat House, but I do think that came a lot from my seeing Nick Broomfield movies. There’s no rule about what’s in it, how much of that or how little, it’s just whatever serves the story.

From today until a week from now you can watch Hated for free, courtesy of Pitchfork TV at this link.