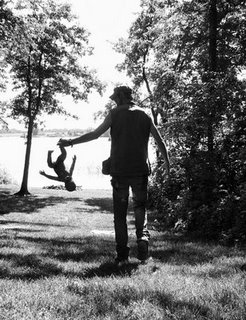 Filmmaker Julian Grant, who is a tenure-track film professor at Columbia College, Chicago, is making a “fiercely independent” ultra-low-budget, dialogue-less horror film entitled The Defiled, and he’s reporting a very detailed blow-by-blow of its production on his blog. He describes the film as ” a story of love and survival against a horror that is cataclysmic and…entirely possible.”

Grant is shooting on the Canon HV20 with a cine-adapter and Nikon 50mm lens. He’s in the middle of week two, so if you’d like to follow from his production, head over there now. You can find footage tests, make-up tests, test poster designs, a crew breakdown and more.