by Nicholas Rombes
in Columns, Filmmaking
on Mar 12, 2012

In a passage from his 1952 essay “In Defense of Mixed Cinema,” André Bazin seems to predict the future, a future of watching movies in an age of interruptions and distractions. Bazin writes about watching Les Vampires (Louise Feuillade, 1915) during a night full of technical mishaps:

That night only one of the two projectors was working. In addition, the print had no subtitles and I imagine that Feuillade would have had difficulty in trying to recognize the murderers. It was even money as to which were the good guys and which the bad. So difficult was it to tell who was which that the apparent villains of one reel turned out to be the victims in the next. The fact that the lights were turned on ever ten minutes to change reels seemed to multiply the episodes. . . . Every interruption evoked an ‘ah’ of disappointment and every fresh start a sigh of hope for a solution.

And yet, there is a charm and humor to this, and perhaps something more: a sense of release. Release from the tyranny of meaning imposed by the very conditions of watching a film in silence in the dark under a spell false reverence. Blue Velvet, extended beyond all reason over the period of one year, though still the same movie, is now experienced through chance. And yet perhaps chance is an inescapable (subversive) part of seeing movies in the first place. So much, after all, is dependent on our state of mind as we’re watching, the conditions of our surroundings, our predisposition toward the film itself, our feelings about those around us. And so here we are, at frame number 4183, as Dorothy has just snatched from Jeffrey’s hand her son Donny’s propeller hat, a hat which, at the end of the movie, will signify so much happiness for Dorothy. And it just so happens that the trailer for Blue Velvet uses a few seconds of footage from this scene, taken from just moments before the frame in question: 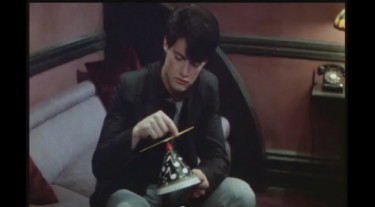 You arrive on a page with two images, taken from the same film, separated by nothing more than a few inches on the screen. And yet they couldn’t be more distant.