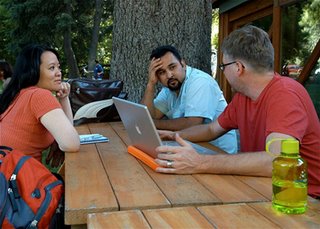 Here’s our final Sundance Creative Producing Lab blog from producer Mynette Louie, who collects her thoughts after a night’s sleep back in New York.

I flew home from the Sundance Resort late last night and just woke up after a 10-hour slumber. The weeklong experience of the Creative Producing Lab and Summit was intense, to say the least! Each day of the four-day Lab and 2.5-day Summit started at 8am and ended at 11pm, and we barely had any breaks.

The range of what we covered with our producing advisers — Lynette Howell, Paul Mezey, Mary Jane Skalski, Jay Van Hoy — guests, and the Sundance staff was vast: the writer-director relationship, specific creative feedback on our scripts, the producer-financier relationship, communication issues, the indie marketplace today, the festival circuit, distribution issues, the producer-attorney relationship, costing your project, strategic planning, music in film, the art of pitching, how to survive as an indie film producer, and how to strike the work/life balance. That’s a lotta stuff! Which leads me to the first of my five key takeaways from the Lab:

1. The range of what a producer needs to know today is gigantic. Lynette Howell kept telling us this. Like me, she calls herself a “soup-to-nuts” producer. I think today, you have to be more like a “soup-to-nuts-to-soup-to…NUTS!!!” producer. The job of a producer has always been tough, but now that we can’t rely on the old models of financing and distribution, it’s tougher than ever. You have to know how to read a contract, do a schedule, do a budget, project revenue, talk to financiers, understand tax incentives, keep pace with distribution, promote your movie, reach your audiences, and oh yeah, talk about story. It’s daunting, for sure, but as people who have a natural inclination for knowing a lot about many different things, we should embrace the fact that we must make it our business now to know everything about everything.

2. The producer is the last man (woman) standing. Paul Mezey says the “first in/last out” mantra that applies to a producer on set applies to the entire life of the film. Producers are responsible for everything; the buck stops with us. We are the cheerleaders, the problem solvers, the ones who must own our films and push them through to the end (and beyond). Even if we’ve sold the rights to a distributor, even if we’ve hired third parties to sell them for us, we can’t be lazy and simply trust others to carry our films through — they are our babies, forever and ever.

3. The current environment of indie film is going to force us all to be better producers. Lynette Howell thinks that the difficult times we are facing now will be a good thing in the long run. Jay Van Hoy says that because times are so tough, the BS factor that has permeated the indie film industry for years has evaporated. Producing films is so much more difficult now that the dabblers aren’t doing it anymore. And the ones who are left are those passionate (and masochistic and insane) enough to keep doing the impossible. It’s actually fun to further exercise our creativity by coming up with new ways to distribute and promote our films. The more Sisyphean our journey to get our films made and distributed, the better producers we become in the end.

4. We need each other’s films to succeed. Cora Olson and Jennifer Dubin, producers of Good Dick, said this in their inspirational panel on self-distribution. We need other quality indie films to succeed in the marketplace to prove to investors that these films are still viable investments. That way, they can keep investing in them and we can keep making them! I feel that producers have become much more open and generous with sharing information —this is critical for us to do right now as a community of content creators fighting the same uphill battles. At the Lab, there was a “cone of silence” over all of our discussions, which allowed our advisers and us fellows to speak openly about the deals we’ve struck, the problems we’ve had while making our films, the investors and distributors we should be wary of, etc. Sharing specific information like this will help other producers avoid the same mistakes in the future, and give their films (and in turn, ours) a fighting chance.

5. The story is the most important thing. With all of the stuff producers need to keep on top of these days, it’s really easy to forget why the hell we embarked on this ridiculous, impossible journey of making a film in the first place: the story — the seed from whence everything sprung. The story is what will carry us through the worst of times — when we are butting heads with agents on perquisites, when we lose a location the night before we’re supposed to shoot there, when we’re on our 14th hour and the crew is grumbling, when we can’t get our directors to listen to reason, when we can’t convince distributors that our multiple award-winning film will sell tickets. Mary Jane Skalski said that when we face these obstacles (and there will be MANY!), we need to remind ourselves why we loved the project in the first place. Our passion for the story must remain alight throughout the full life of the film, or else it will be an incredibly torturous road. Therefore, it is important to get the story right at the start — to get it to a place where producer, writer, and director can be sustained merely by the fuel of wanting to tell it, in spite of the difficulties of the process.

I came into the Sundance Creative Producing Lab hoping to find an answer to the problem of indie film distribution, and to figure out how we can keep making the films we want to make. I found the answer, and it is: us, the producers. It is up to us to figure it all out.