THE MICRO-BUDGET CONVERSATION: SXSW AND ITS EMOTIONAL TOLL 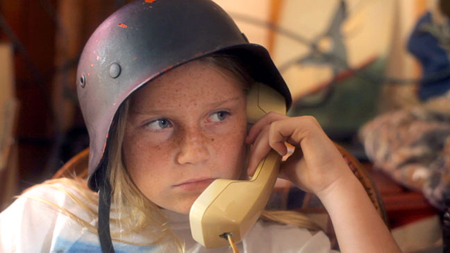 I am not cut out for big festivals…film or otherwise. Let’s take away the fact that large crowds disturb my calm, on top of that I am a person of extremes. I either jump in all the way, or abstain from the activity entirely. Take a person like that and just feed them beer and films…and you get the worn-out mess that is myself. Two days after the experience I’m still sick, tired, and working hard to gain a foothold on what the festival meant to me and what it means to our industry. Industry is a great place to start…a fitting catch-all to what I experienced. I used to think festivals were obsolete and needed to be replaced. Despite the fact that I found SXSW to be nothing but a commercially-driven affair, I am now completely convinced that festivals are a needed component in the ecosystem that is indie filmmaking. The days of them being the one and only way to get your film noticed are way over with, but without them there would be absolute chaos. Without the need to be in them, to attend them, and to try to show at them, the industry of indie film would collapse. The drive to compete and to challenge an audience would disappear for some people, and the conversation would end. In the time I was there I went through every emotion at least once a day…it was like I was grieving and celebrating at any given moment. The conversations, the good films, the incredibly bad films, the shitty Q and A’s, and the great conversations made it an experience that I found some folks took for granted, others embraced, and yet some still exploited. Where does a festival find the balance between art and commerce? Do we allow the industry to dictate our conversations and goals? Can we put a bigger wedge between art and commerce…and…do we need to? These are the questions that were asked…we will work on the answers.

I saw a ton of great films, and a bunch of not so great films. Kid-Thing (pictured above) was by far the best low budget indie I saw…Safety Not Guaranteed…the best big-budget indie. Two things I noticed. 1) Everyone was a real big fan of zoom shots this year, AND 2) many of the films felt way too cold and calculated. In my process over the years I’ve always felt my best work was the emotionally sloppy work. The work that had a visceral edge to it like a lo-fi basement recording or young naivete; a real take-it-or-leave-it kind of feeling that only comes from someone who can’t get it quite perfect because they are stuck way too far in it. Lately it’s easy to spot the seams and the intentions seem to be drawn out with a ruler. It was in this state of mind that Rice Omary sent me her contribution entitled “Filmmaking and the Emotional Toll.” Perfect.

Besides being prominent film directors they have all publicly acknowledged the emotional toll that filmmaking has taken on them. Although they, along with many others, share a common experience of being attached to a production and riding its stringent ebbs and flows, I’ve found that few filmmakers ever discuss this aspect of creation. We are so product-oriented that, in speaking about our filmmaking process, we obscure the humanness in its construction.

I believe filmmaking is inherently emotional. We seek to rattle responses out of people with visual storytelling. Whether it is disgust, sadness, excitement, joy, or fear, films are banks of emotional events. Our audiences withdraw from these institutions a tangible experience that ultimately enlivens them.

Art educator Nicole M. Gnezda, distilling 86 years of scholarly research on the matter, describes creation as a process that comes in stages. First is the idea stage, which is complemented by low mental arousal levels that allow creative thinkers to come up with ideas.  After an idea is perceived a creator enters the illumination stage. This is often referred to as the “eureka” moment of discovery. Finally, a creator enters the implementation stage. For various neurological reasons, this stage is categorized as being the most perilous. Implementing kernels of inspiration is challenging, with multiple fits and false starts. It is mentally strenuous, requiring traditionally left brain hemisphere activity combined with the sustained arousal of the right brain hemisphere. In creative people, it is the first two stages that are the most pleasurable while the latter is not only difficult, but much more emotionally unsatisfying with a high rate of disappointment once the implementation has occurred. This is quite frankly because our ideas are always much more perfect than what we ultimately manifest.

Remember when Paul Thomas Anderson insinuated dissatisfaction with his masterpiece There Will Be Blood by stating that he thought Magnolia was the best film he will ever make? I think of that as a Polaroid of the effects of the implementation stage. There is a difference between loving to write and loving the experience of having a seemingly brilliant idea that bears little resemblance to what you’ve managed to wrangle onto the page. Implementation is indeed like a wave, colliding upon itself until the right peaks find their place in our endless search for perfection.

This implementation stage is where filmmaking as a creative activity is an extreme departure from almost all other art forms. A writer struggles with crafting a perfect sentence. A painter struggles with finding the perfect lines. But filmmaking requires collaboration. It (usually) necessitates more than just a single person to implement an idea. So in addition to struggling with the already callous implementation phase, we also struggle with having to do this in a group. Finding the right people is critical.

At the high production level this has the ability to be a gift. Often in big productions you stand on implanted pillars, surrounded by highly experienced people who afford you the liberty to delegate portions of the implementation process with less anxiety. Different expert craftspeople help continuously shape the initial inspiration. We can rely on others we trust to aid us in succeeding. To some creators this is a blessing.

If you are that kind of creator, working at the micro-budget level can be a disadvantage since you are limited in who (and how many) you can choose to aid you in this stage. In addition, at this level one’s role is aggrandized to such a degree that much more of this stage depends on one person. Some filmmakers choose to wear multiple hats. They enjoy being filmmaking generalists. Although I too like both the above-the-line and below-the-line work of filmmaking, I prefer to specialize in one area. But as a micro-budget filmmaker, I often don’t have the choice. I have to wear multiple hats that are all heavily laborious. I am not afforded the luxury of intensely focusing on one aspect of implementation (the one that I study and practice with much rigor), instead being forced to experience different forms of implementation, consequently exacerbating the emotional strain. That is why, I believe, this style of filmmaking has the potential to wreak even greater havoc on the affective condition of the creator.

The scope of this blog is far too narrow to fully explore this topic in depth but it is one that merits further examination. Our motives for making micro-budget films, coupled with ideas regarding risk tolerance, personal and creative accomplishment, and prosperity shed a small pool of light on how vastly complex filmmaking as an emotional exercise truly is. Not everyone goes through the same level of strain, and I know many filmmakers who have found extraordinary fulfillment in the micro-budget realm. Examining how our brains and hearts work as creative people, and considering the setups of different productions lend themselves to interesting discoveries about us as filmmakers, craftspeople and artists. — Rice Omary

Rice Omary has endeavored to work in the film industry for the past 18 years. Someday she hopes to succeed. In the meantime she’s had the pleasure of working with various independent filmmakers and numerous production companies and media outfits.

We’d never turn down the chance to hear from you, especially micro-budget fans and filmmakers. We are expanding our content to include genre, filmmaker journals, and the business of all things indie. To become part of the conversation please send us your thoughts, responses, and questions.