BETWEEN THE DEVIL AND “THE DEEP BLUE SEA” 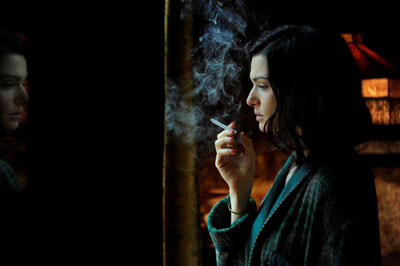 Hester Collyer (Rachel Weisz) appears to have everything. The 40-ish protagonist of Terence Davies’s new film, The Deep Blue Sea, set in London in 1949-50 and adapted by Davies from Terence Rattigan’s 1952 play, she is stunning, wealthy, cultured, intelligently opinionated, and articulate. But her inability to make the distinction between love and lust proves to be her downfall.

Most of us learn to know the difference. Although it might be difficult for someone in 2012 to fathom, Hester is a creature of her times. This daughter of an Anglican vicar married according to class expectations. Her husband was a rich, esteemed High Court magistrate, Sir William Collyer (theater actor Simon Russell Beale), much older and sorely lacking in the animal magnetism department.

Hester dips her toes into the wells of passion for the first time after meeting Freddie Page (Tom Hiddleston), a high-energy, unsophisticated, earthy younger man with whom she has little in common. She interprets the intense physical pleasure she gets from lithe Freddie as love. But he is far too casual and glib to deal with her intensity. (The meaningless “Isn’t what what they say?” is his favorite expression.) He is not an educated aristocrat, but a former RAF pilot who cannot shed his wartime persona, which he sees as somewhat heroic. Unemployed and reckless, he spends most of his time pub-crawling with his best mate.

Hester leaves the comforts of her husband’s home and moves into Freddie’s depressing bedsit. Doing so outside of marriage was a no-no; she spits in the face of convention. Freddie begins to find the relationship suffocating. Unlike him, she is accustomed to the luxuries of idle time and material comfort. Having always gotten what she wants, she is unable to modulate her response to his backing off. She attempts suicide, a crime at the time in Britain, with a combination of aspirin and an unlit gas heater that runs out of coins. Freddie, a petit bourgeois who unquestioningly internalizes the law and social norms, is horrified and takes a hike.

Even after her act of desperation, she cannot let go. She has not a clue that what she really misses is great sex. Hester, like many rich people, can afford to be obsessed. She doesn’t work and has no hobbies. In her marriage, she had been a dutiful and devoted wife until meeting Freddie at a golf club. Sir William had offered her everything except carnal satisfaction. Neither man is a viable option for her: She is indeed caught between the devil and the deep blue sea.

Though Davies does not shy away from Hester’s flaws, he tailors the film almost entirely from her point of view. This is one of two significant deviations from Rattigan’s play, the other being the segmentation of the narrative into short, self-contained sequences, which he scrambles into juxtapositions that defy chronology. We assemble the pieces in our heads.

The shifting temporality between adjacent scenes makes this adaptation of a somewhat static theater piece edgier, more unpredictable, and more engaging. It also affords Davies the opportunity to play with form, such as when he bridges scenes from different periods through visuals rather than logic. (For example, when Hester goes into Aldwych tube station with what seems to be self-destruction on her mind, she suddenly slows down and relaxes. We have just jumped from postwar to wartime Britain, when she and Sir William had taken refuge there from the Blitz.)

Davies’s depiction of Hester is very much in line with his sympathetic female characters in such films as The House of Mirth and The Long Day Closes. He shows special empathy for gay characters, even if their presence and behavior is more covert. Like suicide, homosexuality was at the time a punishable offense, not merely a social stigma. When asked if he is a licensed doctor, an elderly neighbor in their building responds with his eyes and facial gestures, a hush-hush answer indicating that he has been caught in a gay act and fallen from grace. Rattigan was a gay man who lived during those times, Davies the product of a newer, more enlightened (if still repressed) generation of gays. Both of them rely on the coded language of the oppressed.

Even while highlighting the dark side of mid-century British society, Davies is, as we see in most of his work, smitten by the period. There are several scenes of warm communal pub singalongs (in a brilliant scene, a rendition of You Belong to Me by the customers seamlessly morphs into Jo Stafford’s standard version).

Most of the music, however, is from Samuel Barber’s Concerto for Violin and Orchestra, Op. 14. It is loud and strong, harsh even—perhaps echoing Hester’s inner turmoil. Like many other elements in the film, Barber’s music recalls the Rachmaninoff score in David Lean’s 1945 Brief Encounter, the barometer for films about ill-fated illicit love affairs.

Few filmmakers could make the murky browns and semi-decayed state of exteriors, and smoky interiors, as palatable as Davies. He deploys graceful tracking and crane shots without skipping over anything in front of the camera that might not be considered aesthetically appealing by others. He embraces everything, the whole of British society, warts and all. Once again, Davies finds value in all the unusual places.