by Nicholas Rombes
in Columns, Filmmaking
on Mar 30, 2012

Dean Stockwell has said that he based his character Ben on a Carol Burnett sketch: “You know that thing that I do with my eyes? Carol Burnett had a character of this super snooty woman and she was always like this. I stole it and I told her one time and she laughed her head off when I told her.” And in an alternate-universe sort of way, this entire sequence at Ben’s is like one of the extended Carol Burnett Show sketches from the mind 1970s, with Harvey Korman and Tim Conway. The awkward pauses, the physical comedy violence, the feeling of improvisation. (In Rabbits [2002] Lynch added a laugh track to a similarly high voltage scenario, and when, at the 2:40 mark, Jack the male rabbit enters the apartment, the audience laughter and applause is reminiscent of any sitcom–Carol Burnett or otherwise–where a favorite character, such as Tim Conway or Harvey Korman, steps into the frame. Ben’s earlier line–“Frank’s here”–almost calls out for applause.) 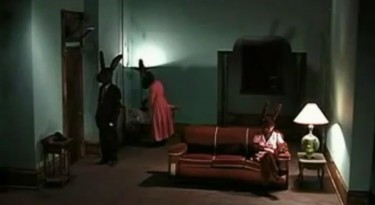 At the moment of this frame, at second number 4512, Frank has just remembered that the glasses have not yet been brought over for the beer. “Where’s the glasses?” he shouts. “The beer’s gonna get warm. One thing I can’t fuckin’ stand is warm beer—it makes me fuckin’ puke!” Ben’s demeanor during this tirade is calm, patient, and perhaps even bored, as if he’s thinking, This is typical Frank; I’ve seen and heard this before. And of course we are not really looking at Ben’s face, but Dean Stockwell’s, which carries a range of associations going back to his work as a child actor in the post-war era. In his book The World in a Frame, Leo Braudy writes that films

add what is impossible in the group situation of the stage or the omniscient world of the novel: a sense of the mystery inside character, the strange core of connection with the face and body the audience comes to know so well, the sense of an individuality that can never be totally expressed in words or action.

What Braudy seems to be getting at here is the double identity projected by actors who are known to audiences from previous roles in other movies. With some names—Marlon Brando, Faye Dunaway, Dean Stockwell (perhaps)—the force of who they were as X in X movie precedes them, creating layers of meaning and expectation around their characters, an aura or spell that can only be broken if their performance in the film at hand shatters all the expectations about them that we ourselves bring to the screen.