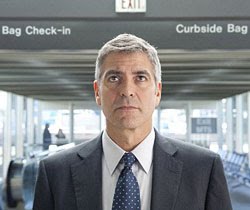 “I don’t know whether I liked the film because it’s a good film, or because I think I’m that guy,” a colleague said to me the other night here in Toronto about Jason Reitman’s Up in the Air and its lead character, George Clooney’s smooth-talking, frequent flying, no-attachments corporate road warrior. (In actuality, my colleague is nearly 20 years shy of being able to call himself “that guy.”) Or, he continued, “Maybe it’s just that the film is such a perfect fit for a film festival,” a thought that had occurred to me too. As film festival attendees, we fly from city to city, seeing friends we only really see in those same cities. Some of us cheerfully flaunt expense account living while, for others, status is created by casually dropping news of a killer Travelocity deal or scoring an invite to the party with the best dinner spread. With luck, the panel presentations are better than “What’s In Your Luggage,” the empty motivational speech George Clooney gives in those hotel conference rooms… but sometimes they are not. For anyone on the festival circuit, it’s hard not to occasionally feel a little bit like that guy.

This is not a review of Reitman’s very, very good film, which I will try and get to later. Suffice to say that 20 minutes in I enumerated in my head all the ways I was going to wind up hating this movie. Hollywood mid-life angst against the backdrop of the real pain of fired workers? I was sure the third act would be a disaster. There would be no way that Reitman and screenwriter Sheldon Turner (adapting Walter Kirn’s book) would pull this thing off.

They do — and with a last line and image that’s among the most resonant of any recent Hollywood film. And the most remarkable feat? It’s that Clooney’s character has registered here as both a DeLillo-esque postmodern symbol and somebody we might know, even if it’s from looking in our hotel mirrors. Because, at least at a film festival, we are all a little bit that guy.