LAURA POITRAS AND OUR POLITICS OF BORDER CROSSINGS 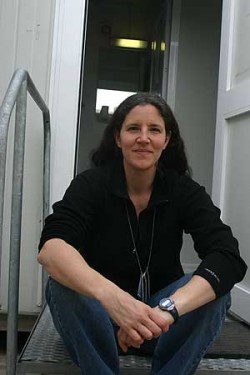 I remember when I first typed documentary filmmaker Laura Poitras as one cool customer. I was interviewing her on the phone about her 2010 documentary, The Oath — for my money the best of the year. The film is about two Yemeni brothers-in-law, one a low-level driver for Osama bin Laden and the other a soldier who became an al-Qaida member and one of bin Laden’s personal bodyguards. But only one was sent to Guantanamo Bay — the driver, not the bodyguard who, at the film’s start, is seen driving a cab through Yemen and discussing jihad with the young men he meets there.

I asked Poitras how she developed her relationship with the cab driver, Abu Jandal, and here’s how she responded:

As you can see, he talks to media, so he’s not shy. But I needed a different kind of access, and that took a long time to get. I made a film in Iraq about the war [My Country, My Country] and he looked at that. I think that film kind of gave me a level of access that was different than what he gives to typical media. But it was slow. Usually I would contact him through a producer I had there [in Yemen]. I mean, [Abu Jandal] is al-Qaida, and I was already on a watch list when I went to Yemen. I had to be careful in terms of communication – like, I’m not in direct contact with him now. We had to be cautious and also stay under the radar.

Travel watch list?!? Poitras dropped that in there, not to make some kind of political statement or induce justifiable rage but to simply explain the challenges she faced while making her film. I followed up by asking her more about how that designation affects her work. She answered:

[laughs] Well, you know, I assume everything is listened to, including this interview. That’s how it impacts how I did this work! If you’re talking to any lawyer who’s representing Guantanamo [prisoners], you basically assume you are getting caught in the net of people who are being monitored. And the question is to what extent? Is it just electronic monitoring? Are they really paying attention? We always kept multiple copies of footage in different places. I didn’t want to be subpoenaed – that was certainly a concern. And when I travel I experience difficulties. Returning back to the States, I’m always met at the airplane by Border Patrol folks who question me. So yeah, it’s a particular way of working.

Yesterday Slate’s Glenn Greenwald wrote more about this “particular way of working” in a piece titled, simply, “U.S. Filmmaker Repeatedly Detained at Border.” Poitras was measured in our conversation, and she is again here. But Greenwald updates the story and the result is indeed both rage-inducing and, from a Constitutional standpoint, deeply alarming.

This past Thursday Poitras returned home to New York from Britain. Before boarding her flight she was questioned by a Customs and Border Patrol Agent, and when she landed she was led to an interrogation room by Homeland Security.

For Poitras, this has become normal.

This time, however, she was told by multiple CBP agents that she was prohibited from taking notes on the ground that her pen could be used as a weapon. After she advised them that she was a journalist and that her lawyer had advised her to keep notes of her interrogations, one of them, CBP agent Wassum, threatened to handcuff her if she did not immediately stop taking notes. A CBP Deputy Chief (Lopez) also told her she was barred from taking notes, and then accused her of “refusing to cooperate with an investigation” if she continued to refuse to answer their questions (he later clarified that there was no “investigation” per se, but only a “questioning”). Requests for comment from the CBP were not returned as of the time of publication.

Just consider the cumulative effect of this six years of harrassment and invasion. Poitras told me that it is “very traumatizing to come home to your own country and have to go through this every time,”and described the detentions, interrogations and threats as “infuriating,” “horrible” and “intimidating.” She told me that she now “hates to travel” and avoids international travel unless it is absolutely necessary for her work. And as she pointed out, she is generally more protected than most people subjected to similar treatment by virtue of the fact that she is a known journalist with both knowledge of her rights and the ability to publicize what is done to her. Most others are far less able to resist these sorts of abuses. But even for someone in Poitras’ position, this continuous unchecked government invasion is chilling in both senses of the word: it’s intimidating in its own right, and deters journalists and others from challenging government conduct.

In addition to the sheer intimidation these surveillance and interrogation policies direct towards journalists and artists like Poitras, they also erode the Constitutional rights of all of the rest of us. As Greenwald explains, the Fourth Amendment of the Constitution protects against unreasonable search and seizure. However, international travel and our digital lifestyles have prompted the government to dodge these citizen protections. From Greenwald:

In an age of international travel — where large numbers of citizens, especially those involved in sensitive journalism and activism, frequently travel outside the country — this power renders the protections of the Fourth Amendment entirely illusory. By virtue of that amendment, if the government wants to search and seize the papers and effects of someone on U.S. soil, it must (with some exceptions) first convince a court that there is probable cause to believe that the objects to be searched relate to criminal activity and a search warrant must be obtained. But now, none of those obstacles — ones at the very heart of the design of the Constitution — hinders the U.S. government: now, they can just wait until you leave the country, and then, at will, search, seize and copy all of your electronic files on your return. That includes your emails, the websites you’ve visited, the online conversations you’ve had, the identities of those with whom you’ve communicated, your cell phone contacts, your credit card receipts, film you’ve taken, drafts of documents you’re writing, and anything else that you store electronically: which, these days, when it comes to privacy, means basically everything of worth.

Greenwald notes that two Congressional efforts to impose regulations on DHS airport searches have “gone nowhere.” One can only hope that increased awareness of cases like Poitras’s will lead to better treatment for her and other journalists and artists affected by these travel rules.

Poitras, currently at work on the third film in her post-9/11 trilogy, is part of the Whitney Biennial this year, and her event on Friday, April 20, is sadly apropos:

For this evening program, she is joined by Jacob Appelbaum, computer security researcher, privacy advocate, hacker, and human rights activist. Together they will reveal elements of their own work to investigate methods of surveillance as well as tools of circumvention. Join them as they invite the audience to explore the Museum through the lens of a Panopticon observation system.