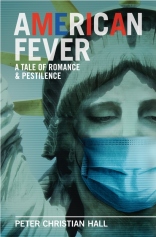 Back in the day Filmmaker took note of Peter Christian Hall’s independent drama Delinquent, and more recently we’ve followed his move into fiction writing. Now, film and literature are combining for the promotion of his new novel, American Fever, a dystopic tale about avian flu. With book trailers a requirement for new books, Hall has decided to let fans create one for American Fever — and win $1,000 in the process. What’s cool is that filmmakers can read the book for free and score their trailer to original music by Gang of Four’s Andy Gill. From the site of Hall’s publisher, Arterial Witness:

“The book trailer is a hybrid beast that hasn’t really paid off for many publishers and authors,” says Hall, who notes that the best trailers contain great music, inviting quotes from respected sources, and compelling images.

Hall has been praised for his own filmmaking. His narrative feature Delinquent was hailed by the Los Angeles Times as “one of those great little near-no-budget movies that every now and then seem to come out of nowhere to give hope for a truly independent American cinema.” He also knew he could get compelling music: The U.K.’s legendary Gang of Four had scored Delinquent, and the band’s guitarist-composer-producer, Andy Gill, was eager to write a short piece for American Fever. Plus the novel’s website contains a gallery of fantastic images contributed by artists from various countries.

Still, he couldn’t imagine what to do. Says Hall: “Live action? Animation? Some sort of montage? I was stumped. I’m too close to the material.”

Spurred by a friend who was marketing books for a big publisher, Hall realized he should seek fresh thinking via a crowdsourced book trailer. “There’s a world of enterprising talent out there in film schools and tiny production companies — scouring magazines, websites, and the great DSLR blogs — itching to make an fast impact with great images.”

Hence Hall devised the contest, in which publisher Arterial Witness will pay $1,000 for the 73-second video that best captures American Fever’s spirit. Contenders can read the novel at AmericanFeverBook.com, download the music, reviews, and cover at ArterialWitness.com, and post their entries on YouTube. No purchase is necessary and people can submit as many videos as they like.