OF CRISES, FALL DAYS AND NEW POSSIBILITIES AT THE WOODSTOCK FILM FESTIVAL 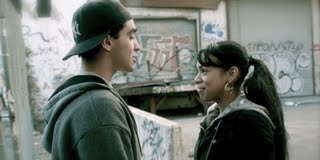 Several familiar faces, including my own, spoke at the Woodstock Film Festival on a panel entitled “The Changing Face of Independent Film.” I moderated, and the panelists were directors Rick Linklater and Ira Sachs; Cinetic’s John Sloss; and Big Beach’s Peter Saraf. As four of the five of us attended the Indiewire/MoMA/Zipline summit on the crisis in independent film production and distribution, I began by asking what the term “crisis” meant for them. Sloss spoke about the vanishing studio specialty divisions and with them the erosion of the indie film business model that requires a marketplace with well-funded buyers. He described later a “Eureka moment,” in which he realized that he must begin to counsel filmmakers to raise distribution funds alongside their production financing. (Sloss also quipped that all this talk about collapsing models made him feel like he was in a “Stalinist re-education system, where you have to renounce everything you previously believed in.”) Sachs, who spoke of a decrease in the amount of capital available for film production, discussed the creative benefits that can occur when one realizes that one is in a crisis. For him, that means flexing his filmmaking muscles by making a short experimental film that he will begin shooting this week. Linklater, who wasn’t at the summit, recalled the history of independent film and directors like John Cassevetes and Shirley Jackson who made great films without the benefit of an operational independent film business. “Success stories ruined everything,” he said of the few wildly successful independent films that created outsized expectations for the sector.

We talked a bit about DIY theatrical and some of the new consulting and service deal companies run by industry vets like Tom Ortenberg, Russell Schwartz and Mark Urman, and Sloss brought up the central challenge many of these companies and individual filmmakers have: the lack of a pay-TV output deal. He brought up the example of The Illusionist, for which Bob Yari basically created his own specialty distributor to release and then grossed $40 million. But, when it came time to sell to pay cable, the numbers he received weren’t as high as they would have been if he had just been filling a pre-negotiated slot. He said the prices indies get selling on their own to pay cablers can be as little as 10% of the number they’d get if their film had been released through a mini-maor with an output deal. His optimistic takeaway here is that as pay cable deals recede in the face of greater VOD penetration, a more level playing field may emerge.

I brought up the trans-media question, asking if anyone is developing projects in which film is only part of the storytelling equation. Saraf talked about a number of Big Beach films, like Sunshine Cleaning, for which they are developing ancillary spin-offs. When I asked why in the face of such changes in film economies and viewer behavior hasn’t the narrative form changed more, Sachs defended the value of long-form feature storytelling, comparing it to poetry, which needs advocates for itself as an art form as much as critics praising individual poets. “Poets fight to change but also preserve,” he said.

This was Woodstock’s 10th year, and during some beautiful fall weather the festival continued to demonstrate why it’s a favorite of talent, the industry, and the local audiences who pack the theaters. Industry guests are put up in the homes of local residents, and I have some tips from the very nice couple who gave me a bed. First, they loved Oren Moverman’s film, The Messenger, finding it emotional and gripping, and they liked Dave Boyle’s White on Rice. They flat-out loved, however, William Jennings’ Harlem Aria, which premiered at the Toronto Film Festival in 1999 and which only now has been picked up for further distribution by Magnolia Pictures. (Filmmakers, take note and have hope!) Guests attending for screenings and panels included Uma Thurman, Woody Harrellson, Ben Foster, Ethan Hawke, and Jonathan Demme, among many others.

Woodstock’s awards are as follows:

Our “indie film” trail has now come to a crossroads. The road to the summit will not be cut by filmmakers alone, but equally drawn by the audience that recognizes how vital a diverse culture truly is.