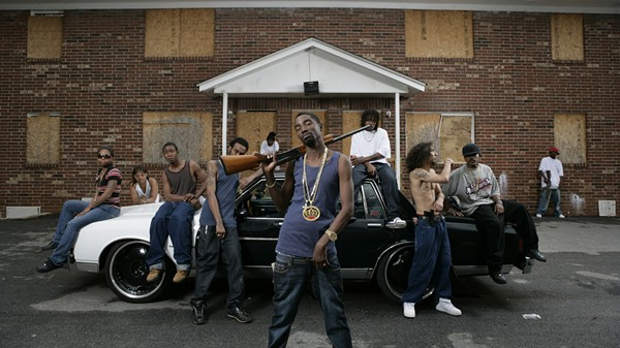 by Brandon Harris
in Director Interviews, Directors, Interviews
on Apr 18, 2012

The line separating documentary and narrative film aesthetics has never been more porous than it is now, but Damon Russell’s revelatory Snow on tha Bluff lives comfortably on that line. An incredible combination of found footage, no-budget narrative ingenuity and pulled-from-the-streets doc immediacy, it discovers in its incredibly charismatic and troubled protagonist, Curtis Snow, an American life many of us would probably rather forget about. Easy to dismiss as “Cops from the perp’s perspective,” perhaps, this startlingly authentic document of the life of a young, black, crack-dealing single parent — and of the dangers that lurk in poor and working-class black communities — isn’t easy to digest. Indeed, its characters frequently speak a Southern Negro dialect that few but the initiated may be able to understand.

Light on narrative and heavy on incident, Snow on Tha Bluff, which had its world premiere at last year’s Slamdance Film Festival before making stops in Maryland, Brooklyn and Atlanta (the latter for a particularly memorable, short-circuited screening), is as exhilarating, comical and infuriating as its anti-hero proves to be clever, resourceful, violent and, finally, irresponsible. At first glance — and perhaps after many more — it’s nearly impossible to know how much of the film is staged or not. It opens with Snow stealing a camcorder from a trio of unsuspecting tourists slumming for drugs after a stop at Stone Mountain; the rest of this “found footage” movie is ostensibly shot on that camera. And while the film is an editorial marvel, seamlessly interweaving Snow’s own archival footage with material directed by Russell, it is no mere stunt. Snow on Tha Bluff forces us to understand Snow as a man trapped in a brutal system of recrimination and victimhood.

Where does the documentary end and the fiction begin? Or, vice versa? Russell, an Atlanta native and Georgia State alumni making his feature debut here, certainly isn’t telling. Regardless, and no matter how small its release, it is a major film; black American cinema finally has its David Holzman’s Diary.

Snow on Tha Bluff opens at the reRun GastroPub Theater in Dumbo, Brooklyn on Friday. 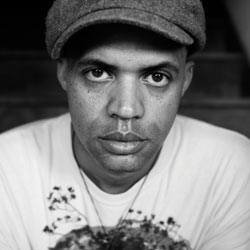 Filmmaker: How did you come across this project? Curtis Snow sought you out, correct? Had he already been shooting stuff beforehand?

Russell: I had shot a little short film down there [in the Bluff]. He had all this footage and was looking for anyone connected to the film or TV world to help him. And he stumbled upon me through some people we had met while we were making this little film.

Filmmaker: What was it like working for him? You’re shooting in these incredibly depressed neighborhoods. I imagine you’re staging a lot of things that had happened in his actual life?

Russell: It was a very practical process. I met with him, would hang out down there, and I’d meet his friends. I got to know all of them before I even shot a frame with [Snow]. Once that trust was there, then we started bringing out the camera. There wasn’t any real direction at first. I was just filming whatever was around that would happen. We’d be standing around and an ambulance would pass by. So we’d follow them and just start filming whatever was going on in the neighborhood. Then, as things progressed, we started to come up with a story. I had this footage already that I wanted to incorporate so I tried to make that fit into the story. It was kind of like filming a documentary, where it would take forever. But then we had the luxury every now and again of saying, “Let’s go shoot a scene like this.”

Filmmaker: At what point in the story did you decide that it was going to hinge upon Snow’s journey back from prison and the struggle to come to terms with fatherhood?

Filmmaker: Was his girlfriend really killed?

Russell: That part I really don’t like to reveal. I prefer to leave it alone.

Filmmaker: Did you have any idea you we’re going to end up making a film with such a hybrid quality to it before Curtis approached you?

Russell: Well it’s kind of funny, because I was doing very traditional narratives, and they weren’t very satisfying. I had [also] done straight vérité documentaries. They didn’t quite work for me. What I really learned from was working in reality TV. People complain about reality TV, but actually it’s kind of an interesting form. You take real people, and you have real stories and you’re fudging things to try to make them interesting for TV. So I tried to take a lot of what I learned doing that on this movie, and it actually kind of worked. That’s really what I want to do — make my specific niche as a filmmaker working with non-actors. Curtis was perfect for that. I’m just not that crazy about working with actors. I want to work with non-actors and tell real stories in a kind of manipulated documentary style so it can go where I want it to go to tell the most compelling story.

Filmmaker: Have there been other films that inspired you to straddle that line between narrative and documentary?

Russell: There are a couple of films that really inspired me. There’s Mathieu Kassovitz’s film La Haine, or Hate. That movie blew me away as a kid when I saw it. I saw it and I’d never seen anything like that. Later, when the DVD came out and I got to watch the extras I learned that Kassovitz had moved into this milieu, had moved into the ghettos of Paris and rented an apartment, had stayed there and learned about the people and thus had been able to make something so authentic. That was a real breakthrough for me — I was like, “Wow, you really have to put yourself in the line of fire. Go down there and get your hands dirty if you want to get an authentic story that’s gonna suck people in.” City of God  and the Pusher trilogy made me feel the same way. They blew me away. They were so real. It was shocking when I looked up [the Pusher trilogy] and discovered that those were actors. They seemed so much like real drug dealers.

But perhaps the biggest influence is just that I used to shoot a lot of police-type TV shows. Real police, real murders, stuff like that. I knew a lot about the streets and all that stuff, so I knew when things were bullshit and I knew if someone wasn’t real. So when I met Curtis, I knew he was real. That’s why I dropped everything and tried to invest so much of my personal life to do the movie. You know, I’ve never been arrested before. I’d never been around guns or had a pistol pulled on me, I’d never been around crack or any shit like that. I don’t indulge in or like stuff like that. But I was so intent on telling their story, man, I put myself at risk.

For a more recent interview with Damon Russell as well as the film’s subject, Curtis Snow, click here.