Five Questions with Jessica Oreck About Her New Kickstarter Project 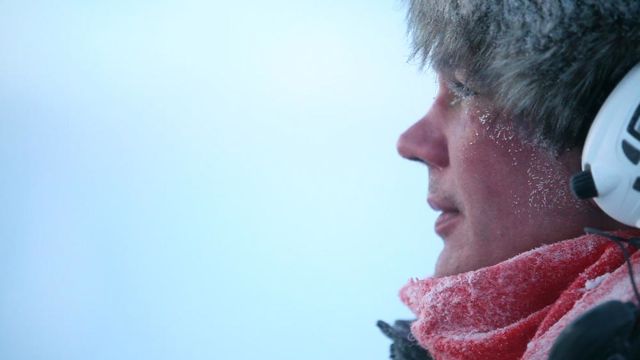 With her debut documentary, Beetle Queen Conquers Tokyo, Jessica Oreck reinvented the nature doc. Oreck, an entomologist who worked as a docent at the American Museum of Natural History, made a film about an insect that was as much about man’s fascination with that creature as it was the creature itself. To top it off, she made her poetic and allusive picture in Japan, exploring the country’s endemic beetle-mania through evocative cinematography and haunting voiceover.

When so many documentary filmmakers make their artistic choices based on the desires of their funders, Oreck chooses the harder path. Her latest film, Aatsinki, promises to be just as innovative even as it focuses on the more human subject of arctic cowboys. Oreck is in the final days of a Kickstarter campaign to fund post-production. Below, she discusses her new film, shooting in the extreme cold, and why she’s back at Kickstarter following the success of Beetle Queen Conquers Tokyo. (After the interview, check out her Kickstarter video as well as the portrait of Oreck Jamie Stuart and I made this Fall.)

1. What inspired this new project?

I love old Westerns. The character of the cowboy is infinitely appealing to me. I love the idea of a man alone in a great expanse of space, in tune with the weather and the needs of his animals. He knows the stars and the landscape almost innately. He is separate from the driving rush of civilization, his time exists for daylight and moonlight. He doesn’t have a Blackberry.

I wanted to find that type of person – the modern equivalent of a Randolph Scott character. The main subjects of my film, brothers Aarne and Lasse Aatsinki, are truly of that type.

2. In terms of your filmmaking, what’s going to be different about this new film as compared with Beetle Queen?

A lot! Although this project deals with the same underlying theme – namely the way people of a specific culture interact with the natural world – the filmmaking is pretty dissimilar. While Beetle Queen was associative and densely narrated with heavy uses of music and color, this project will be quite straightforward. It’s quiet and, because of landscape and extraordinary arctic light, portions of the film are close to monochromatic.

The structure of Beetle Queen was quite formal – not in the sense of a narrative, but in that it was entirely constructed. Aatsinki is quite literally set to the rhythms of their lifestyle and the cycle of the seasons. It’s naturalistic and unadorned, while Beetle Queen played up complications of an already complex culture.

The one thing I am trying/tried to do with both works, however, is call into question man’s concept of his place in the natural world. 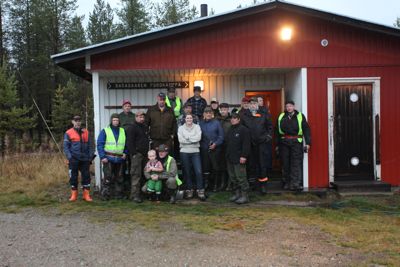 This is the cooperative of herders that I followed for a year. That's me in the middle, with two generations of Aatsinki's to my left, Aarne's father Lauri directly to my left and Aarne to his left. Behind us is the cabin where we all sleep during roundup season.

3. How did you discover and meet your subjects?

I was originally looking in Siberia, but then my parents moved to Helsinki. Like any loving daughter would, I saw this as an opportunity for free room and board with a potential for exploration. I spent about three weeks traveling around the north of Finland, searching for the manifestation of this idealized concept of the modern cowboy, but I was consistently disappointed.

Knowing that I was getting frustrated, my mom, always the helpful mother, said something along the lines of, “Well, there’s this really nice man down at the farmer’s market who sells reindeer meat, I’m sure he knows a family of herders you could get in touch with…” I was skeptical at first, but “the nice man from the farmer’s market,” Jari Etalalahti, assured me he had the perfect family.

Jari and I traveled from Helsinki to Finnish Lapland (about 13 hours by train and 3 hours by car) to meet Aarne in April of 2010, and I knew immediately that he would be the focus of the film. The Lapps are known for being stoic and reserved (especially in comparison to Americans!), so it took a long time to for Aarne’s family to open up to me, but they have been incredibly generous and loving and I know we will be lifelong friends.

4. How did Finland’s extreme cold affect your shooting, and how will these conditions inform your final film?

I was working with the Canon 5D Mark II, all alone, and it was just the camera for the situation. It allowed me to be completely mobile – able to hop on and off snowmobiles or go for days without charging batteries. Also, the main complaint about that camera is that it overheats often, so Finnish Lapland was really the perfect environment in which to use it.

Of course, my inexperience in cold weather caused a few other problems. The amount of clothing I had to wear to keep warm was incredibly restricting, and after one particularly cold day, I ended up with frostbite on my nose and face. Everyone looked out for me though and I always felt safe.

In the end, one of my goals for Aatsinki is to communicate a bit of that coldness and isolation. But I guess we won’t know if I have accomplished that until you see the film!

5. From the outside, Beetle Queen seems like a real success, having received a lot of attention and acclaim. Did it open further doors for funding? How does Kickstarter play a role this time around?

Phew. That’s a tough question. It did and it didn’t. When you tell people you are making a foreign-language film with no formal narrative arc and no main characters (as with Beetle Queen and my other film-in-the-works, The Vanquishing of the Witch Baba Yaga) they generally run in the other direction.

The Vanquishing, oddly enough, has done moderately well with funding, but Aatsinki – which I considered to be much more “sellable” due its main characters and visible beginning and end – has proved the hardest yet.

Kickstarter will actually make up nearly 60% the funding for the film, if we can make it to our goal before May 11! The rest has come from small grants and lots and lots of in-kind donations.

I launched this Kickstarter campaign to do more than simply raise the money I need to finish the film though. I think crowd funding provides a great opportunity to build a community around a project – I just hope Aatsinki is something other people are as excited about as I am!

(Top photo caption: “Aarne Aatsinki watches reindeer in -30 degree weather. Despite the ice on his face, he seems unfazed by the cold.”)