by Lauren Wissot
in Festivals, Festivals & Events, Interviews
on May 10, 2012

An Oversimplification of Her Beauty, Beasts of the Southern Wild, Love Story, Mark Elijah Rosenberg, Rooftop Films, The Tsunami and the Cherry Blossom 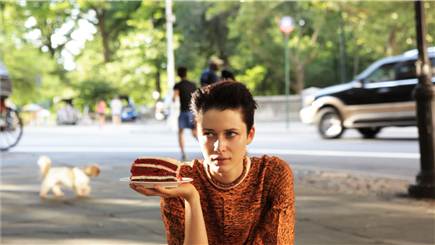 As a writer and filmmaker just beginning to branch out into indie festival programming, I’ve been looking for an excuse to chat with Mark Elijah Rosenberg for quite some time. The man behind the granddaddy of open-air cinema (hard to believe Rooftop Films is now in its 16th year!) has seen his DIY endeavor expand from avant-garde shorts shown on a roof above his humble apartment to Academy Awards-destined features screened in diverse outdoor venues throughout NYC’s boroughs (and beyond). But what’s most impressive to me is that he’s managed to accomplish all this while staying firmly grounded in his indie roots. I finally got the chance to speak with the energetic founder and artistic director a week before Rooftop’s big 2012 opening.

Filmmaker: So after 15 years of putting on al fresco shows, in what ways has your vision for the fest changed over time? In what ways has it stayed the same?

Mark Elijah Rosenberg: I think the core vision has remained the same for 16 years. Rooftop Films aims to provide people a unique perspective — literally, with the view from the roof, and figuratively, with the daring filmmaking we show. We want to create an experience for filmmakers and audiences that is collaborative — it’s not a generic movie theater, where there’s no human interaction; it’s a community, a dialogue, a party.

So much has changed in media since 1997. Back then the reason people weren’t seeing films was because it was physically hard to distribute them. Our first few years were all 16mm film, so there was no way anyone who didn’t know the filmmaker could see the work. Now there’s this thing, “the internet,” which has really blown up. And people are overwhelmed with motion pictures. So the new challenge is A) finding the good stuff amongst all the silly cat videos, and B) actually getting people to come together to watch and talk about the best silly cat videos. (Rooftop is proud to be showing Seth Keal’s insightful, creative and totally adorable award-winning documentary CatCam.)

Filmmaker: And what are some of the challenges of producing outdoor cinema? Have the logistics become more difficult as the locations have increased in number?

Rosenberg: There are a lot of outdoor screenings these days, but it’s a really complicated thing to do. Most are one-time, or once per week, but Rooftop is two, three, even four times a week, often in all different sites. And not just in parks and on piers but in places with stairs and building codes and high winds and other things which make our lives difficult. Add on top of that the fact that Rooftop is also seeking out and programming a festival of new independent films instead of Hollywood classic mainstays, and we could write volumes on the complex logistics of our work.

That said, we have an amazing team (Dan Nuxoll, Genevieve DeLaurier, Aaron Wistar, Kristin Molloy, Alece Oxendine, plus many others) who have become experts at these logistics, and work incredibly hard for months preparing for the festival. So the logistics increase, and it never gets easier, but our staff is very good at what they do, and so our events always run smoothly.

Filmmaker: What is the selection process itself like? Where do you look to find most of your discoveries?

Rosenberg: Every year at Rooftop we watch almost 3,000 films from all around the world, a combination of films that have played at other festivals and films that haven’t been seen at all. So a number of our discoveries and premieres come from the blind submissions. It’s always a thrill to find a film that no one else has seen yet. But we also find a great number of films from other festivals, either the hits that haven’t come to New York yet, or films that flew under the radar.

When looking at films, we try to find films that are unique, daring, and brilliant, focusing particularly on the personal, and on intimate stories and subjects. We want to find a range of films that will speak to our diverse audience, ranging from hipster kids to older people interested in social justice issues, from avid cinephiles to people in low-income communities who wouldn’t usually go see an independent film. So we want a range of fiction and documentary, comedy and drama, films that provide fresh updates on a classic model, and films that break new ground entirely. But everything we show has an emotional and intellectual core to it that is smart, touching, and engaging.

You see that combination of diverse styles, but with a coherent overall vision, for example, in four romances we’re showing this year: Heavy Girls, which is a subtle and lo-fi story of love and friendship between two men in Germany; An Oversimplification of her Beauty, which is an explosion of creativity exploring a relationship in dozens of formats; Argentinian Lesson, a gorgeous documentary about a little boy on summer holiday in Argentina who falls in love with a slightly older girl; and lastly Love Story (pictured above), a high-energy, meta-fictional story of love and interaction on the streets of New York City. All four of those films are, in essence, romantic comedies, but they’re very personal films, where the filmmaker clearly had a singular experience with love that they were expressing in an individual creative way.

Filmmaker: I’ve only seen Love Story – which I think might just be the sweetest romance since Before Sunrise. Turning to a much different subject, after such strong support of Josh Fox’s Gasland, big oil probably isn’t jumping on the Rooftop bandwagon anytime soon. That said, as the festival has grown and expanded, you have increasingly taken on corporate sponsorship. Has there ever been any tension between partners and the programming itself?

Rosenberg: We have a great relationship with our sponsors, partners, and foundation supporters, and none of them would ever attempt to dictate our programming, nor would we allow them to. It’s a good question, though.

Filmmaker: Lastly, I was wondering if you could talk a little about your festival’s identity, and how you’ve managed to hone and preserve it for so many years. As much as I’ve always enjoyed covering Tribeca Film Festival, NYC’s springtime extravaganza that you follow right on the heels of, to this day I have no idea what a “Tribeca film” looks like. In contrast, I can usually predict what is and isn’t right for Rooftop. It definitely feels like there’s a Rooftop “brand.”

Rosenberg: Thanks, that’s flattering to hear, as that is in part the goal of any festival — to champion a type of work that we value in the world, and think the world needs to see. I think the feel of the filmmakers’ hands on the film is perhaps the defining characteristic of our films. Not in a way that’s precious or self-conscious, but that you can feel that someone’s passion is onscreen, a voice clearly heard, not a film that was test-marketed to death and came out of a cookie cutter (to mix my metaphors neatly).

A great example of that personal, Rooftop style is the documentary The Waiting Room, which focuses on a single hospital emergency room for 24 hours. Through this focused approach, the film manages to address many of the key issues facing America today in the health care crisis, but does so in a way that is narrative, dramatic, and entices the audience to see the issues from an emotional perspective.

Of course, Rooftop also has a brand, so to speak, through the Rooftop Filmmakers’ Fund, our grant program which helps produce new films. We take a portion of all ticket sale proceeds, and also partner with local organizations and sponsors, and provide grants for the filmmakers whose work we’ve shown. In this way, the community (the audience, the filmmakers, our partners) all collaborates on supporting emerging directors. And I think with some of the films we’ve supported, which you’ll see this summer at Rooftop, you can tell how our vision comes through. We gave grants to Lucy Walker’s The Tsunami and the Cherry Blossom and Benh Zeitlin’s Beasts of the Southern Wild, films that are very different but which have at their core a sense of hope and beauty and creative energy that is inspiring. And that’s what we’re aiming to do with Rooftop — inspire communities through the medium of film.

Rooftop Films opens its 2012 season tomorrow, May 11. Check out the schedule here.