The Color Wheel — A Hammer to Nail Review

(Distributed by Cinema Conservancy and Factory 25, The Color Wheel opens theatrically in NYC at BAM on Friday, May 18, 2012. It world premiered at the 2011 Sarasota Film Festival and co-shared the Best Narrative award at the Chicago Underground Film Festival before screening at BAMcinemaFest and many, many more festivals throughout the world. Visit the film’s official website to learn more. NOTE: This review was first published on June 22, 2011.)

Full disclosure: I first met Alex Ross Perry in the autumn of 2010. We had attended a screening with a mutual friend and he mentioned to me that he was finishing a new film and offered me a look. As a film festival programmer, I was honored and we met for coffee, where he delivered me a DVD, which I promptly filed in my stack of screeners and didn’t get to watch for roughly three months. When I finally did watch The Color Wheel, I was galvanized by it and offered the film a slot at the Sarasota Film Festival, where it World Premiered this past April. I hope that my own thinking about the film, one that I very much admire, will shine through the perception of a possible conflict of interest and that you’ll take me at my word when I tell you that I don’t write about movies I don’t like, I don’t fancy myself a film critic and I don’t pretend to some ideal of objectivity. Instead, I think it is important to foster discussion about movies that I love, so I welcome your feedback and polite disagreements in the comments below.

***ED. NOTE: A NOT OVERT BUT SOMEWHAT CLEAR SPOILER IS CONTAINED WITHIN PARAGRAPH FOUR. PROCEED WITH CAUTION IF YOU HAVEN’T YET SEEN THE FILM!*** 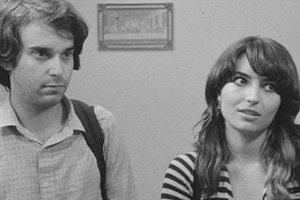 In The Color Wheel, writer/director/star Alex Ross Perry’s second film, J.R. (co-writer Carlen Altman) and Colin (Perry) are siblings living in the cloistered world of their own making; J.R. dreams (and only dreams) of making it as a broadcast news personality while Colin, afraid of his own dreams of becoming an author, works as a writer of focus group copy when he’s not living at his parents’ house or trying to score with his reluctant girlfriend. Despite their hilarious and openly hostile way of talking to one another, J.R. convinces Colin to join her on a road trip to reclaim her belongings from the home of her former lover. Soon enough, the pair set off into the world outside of their tightly circumscribed lives; rural motels, diners and gas station bathrooms set the situational parameters of the early stages of their trip, each working to establish the antique texture of the film, the grainy 16mm black-and-white film (shot beautifully by Sean Price Williams) capturing the cinematic tactility of road trips past, each location bringing Colin and J.R. closer together as their words keep one another at arm’s length.

Tradition would suggest that the travels of a mismatched pair would provide the ideal framework for comic possibility, but Perry and Altman have instead developed two characters who could not be more alike. The pace and tone of their banter and the intimacy of their performances is so in synch, so perfectly attuned to the inevitability of the next barb, that the familiarity of the characters as brother and sister is beyond doubt. This is crucial to Perry’s narrative strategy; every sequence, every line in the film seems to be thinking two to three moves ahead, which not only secures the natural rivalry of the sibling’s relationship, but also engages the audience on an almost literary level; think Franny & Zooey tuned upside down and inside out.

Like all great fiction, The Color Wheel operates in the heightened atmosphere of the author’s storytelling technique, Perry’s style and tone focusing the audience’s attention on the spitfire dialogue and comic situations so that the images are allowed to provide a discomforting, conscious dissonance that eases itself under the skin. In the wrong hands, this strategy could make for a coy game, the structure of the story utilized to set things up and inevitably knock them down, but Perry seems to have something much more important in mind; mapping the emotional journey toward reconciliation and desire, masked the entire time as an endless search for dignity in a world that doesn’t even acknowledge the stakes. 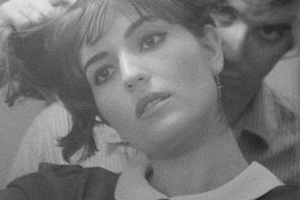 What sets The Color Wheel apart from its contemporaries in American independent cinema is its multifaceted examination of the conflict between the democratic ideal of self-invention and vacuous scaffolding of the society that surrounds it. Family, career, social class, even the parameters of personal imagination: Perry sets the desperate need for connection squarely against the deep limitations of choice and freedom. In The Color Wheel, the dawning disappointments of adulthood can be squarely pinned to the moment when we recognize our own acquiescence to role-playing, to the expectation of others that we inhibit our true selves, our dream selves, in favor of something far less than we had hoped we might be. Perry’s refusal to toe the line is breathtakingly demonstrated in the film’s bravura climax, a deeply transgressive and brilliantly staged shot that lasts more than nine minutes, when J.R. and Colin’s fantasy lives materialize in the physical world. As the pair drunkenly share a couch, J.R. mocks Colin’s “dream job” of becoming a teacher. But as her narrative continues, it spirals, describing her own feelings and fantasies, merging them with Colin’s, amalgamating the siblings at last into a harmonious sense of desire they can’t help but act upon, even if it means tearing themselves apart.

What J.R. and Colin find in one another may not be reconciliation, but it certainly is empathy, a feeling that imposes a new relationship between them (the self-certitude of their jokes is replaced by the confusion and uncertainty of quiet) but also represents the possibility of a huge breakthrough for each of them. When the road trip ends, they head off in different directions, alone again, stripped of their individual illusions and each equally unprepared to face the unknown lives awaiting them. When the emptiness of everything you thought you wanted is exposed, what is left to do? Thoughtful audiences will leave The Color Wheel asking themselves the same question, suddenly aware of their own illusions and full of complicated feelings.