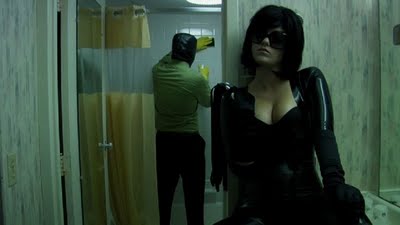 Returning to the Anthology Film Archives following an opening night event at Kush Lounge is Cinekink NYC. No rebel posturing here, just an eclectic selection of docs, fiction and experimental works dealing with some form of alternative sexuality. This year’s fest kicks off tonight at Kush Lounge with an opening party and screenings of JX Williams 1964 short, The 400 Blow Jobs. According to the catalogue, “While banished to the Hollywood blacklist, JX Williams wrote and directed over 200 stag films in the 1950s and 60s, including this wicked homage to Francois Truffaut.” Also on the bill: Loretta Hintz’s Sheep and the Ranch Hand, about a woman who dreams she’s transformed into a sheep. Screenings during the body of the fest range from Zach Clark’s SXSW premiering indie drama Modern Love is Automatic (pictured) to Body Modification Freaks (a doc on the Japanese body mod community) to Bring it!, a collection of work from the mainstream adult industry.

I asked CineKink’s founder, Lisa Vandever to comment on this year’s fest and recommend some titles for Filmmaker readers, and here’s what she wrote back:

What’s been most striking for me this season is how much great material we were able to choose from in putting together the schedule. In past years it seemed like there was always a last-minute scramble to flush out the program with works that have both a sex-positive focus and good production values. This time the difficulty came in having to make tough decisions and pass over some really engaging possibilities.

Another sign of growth and maturity for both CineKink and the sex-positive filmmaking community, while we’ve always had a good offering of shorts and documentaries, this year we also have a number of very strong feature-length narratives. Our opening film, S&M Judge, a drama about the controversy one couple provokes when they begin to explore sadomasochism, does a wonderful job of presenting with empathy and nuance what is generally depicted in a salacious, exploitative way. And our closing film, Stories of Sex(es), represents a bit of the Holy Grail for me, a funny and sexy farce that somehow manages to balance both narrative drive and explicit sexuality, with neither getting in the way of the other.

For more details on the fest, which runs through the 21st, visit its B-side site.