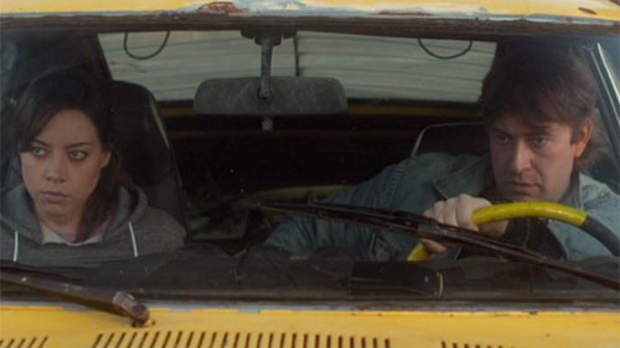 by Niki Cruz
in Actors, Filmmaking, Interviews
on Jun 6, 2012

Mark Duplass is certainly having a banner year. The independent filmmaker’s work ethic is that of a rabid squirrel, frenetically jumping in between the lanes of acting and directing over the years, without ever getting hit with a dud. Since the 2005 indie hit The Puffy Chair, co-directed with his older brother, Jay, Duplass has managed to position himself in front of the camera as well as behind it. This year he has acted in a string of films: Your Sister’s Sister, Darling Companion, the upcoming People Like Us, and Safety Not Guaranteed, a recent hit on the festival circuit. In addition, there’s Black Rock, a film that Duplass wrote and his wife, Katie Aselton, directed. And with his brother Jay, he directed the crossover hit with Jeff, Who Lives at Home, starring Jason Segel and Ed Helms, while later this summer the duo returns with the sports dramedy The Do-Deca-Pentathlon, revisiting the thematic conundrum of two brothers at odds in a quirky way only the Duplasses can pull off.

Duplass’ most recent acting venture is Safety Not Guaranteed, a film by Colin Trevorrow that the Duplass brothers produced. It follows the journey of a man who places an ad on Craigslist looking for a time traveling companion, and the eager team of journalists that respond. Duplass plays Kenneth, the charming idealistic time traveler who’s missing a cynicism chip and believes  that only good-natured and open-hearted people are ready to think outside of the normal spectrum for a journey back in time. Dealing with themes of lost moments and staying young, Safety Not Guaranteed sees Duplass portray his character with a damaged, quirky naivety. Displaying character tics that root in vulnerability and flourish in idiosyncratic paranoia, Duplass grounds Safety Not Guaranteed in its poignancy the best way he knows how — with a rare sincerity.

Filmmaker: Safety Not Guaranteed is a really unique film. How did it come across your desk?

Duplass: My brother Jay and I accidentally started helping people produce movies. Once we started making money, people were like, “Can you give us a little money?” and then we were like, “Oh, this is fun.” So then we opened up a little broader and this is the first external producing project that came to us. It was because we share the same agent and they had tried to make it for a couple of years with Aubrey [Plaza] and Jake [Johnson] attached, but at the time, New Girl wasn’t on yet and Parks and Rec certainly wasn’t what it is now. For the lack of star power, it was hard to get made and Jay and I had a reputation of “If you can’t get it made for the real money, take it to Mark and Jay and they’ll help you make it cheaply.” That’s how it all started.

Filmmaker: How important was ownership over the role of Kenneth? Do you find it’s easier to control the aspects you take into a performance in other projects when you’re actually directing yourself?

Duplass: It’s interesting. I work with a lot of first-time directors, which is my favorite thing to do. Working with Colin on this movie, [I discovered that] he’s visually better than I’ll ever be as a director. [So] I just really wanted to try and make sure that I took care of the performance stuff, and for me, the key to Kenneth was all about making him feel less kitschy and more sad, and more real on that side of the comedy. On the page, he definitely had the possibility to be full-on Jim Carrey, balls-out funny and we all kind of made this decision that we put out the sad side of him, which I thought was really cool.

A lot of stuff was inherent on the page, like the fact that Kenneth doesn’t swear. That’s one of my favorite things about him. Then there are a lot of other things that we added to him, like the way he would run like a little kid, and the way he over pronounces big words, which is something I love that little kids do. There are things I would just naturally fall into and then there would be discussions. I can’t remember how they all came about but it was definitely some consciousness about Kenneth being a little bit stuck in time himself.

Filmmaker: Safety Not Guaranteed deals with damaged characters who are stuck in the past. Do you respond to material specifically because of its theme or is it because there’s an indie mold to fit and is it the same for directing? What was it in Safety that drew you to the project?

Duplass: I think it’s this concept of doing a time travel movie that is less focused on the logistics of time travel and more on the human element of time travel. That was fascinating to me. It’s not so much about how do you time travel, it’s more about why do you time travel. In the case of this film, you’ve got this damaged guy and clearly something has happened to him that made him strange — what is he trying to fix in his past? Every character is trying to eject from their current life to fix [something] and I think that’s a cool metaphor for the way a lot of people are feeling about things.

Filmmaker: In most of your films there’s a common theme of that family tug-of-war. How does your own relationship with your brother impact the stories you want to tell as a filmmaker?

Duplass: Jay and I actually have a pretty conflict-free relationship, for whatever reason. I think it’s because we know we work [well] together, and we’re scared to get into fights because we don’t want to damage the relationship. We just try to be very sensitive in our conversations with each other, but we’re obsessed with family and with these interpersonal dynamics that happen within families that are so complex. They’re the only relationships that you can’t escape in this world. You can certainly break up with your boyfriend or girlfriend and move along, but family is always there and there’s just very moving and funny, and sad, about that. It’s what we love to explore.

Filmmaker: As a filmmaker you’ve worked with lesser-known talents and those that are more well-known. But no matter who you’re working with, you and Jay always seem to create an environment that allows actors to do their best work.

Duplass: That’s a conscious decision on our part. If you look at our films, they are not that beautiful to look at. There’s not stunning cinematography everywhere. There’s not that gorgeous dolly shot. It’s a handheld camera right up in people’s faces. We design everything on the set to be focused completely on the actor. For our tastes, it’s just what we’re obsessed with, which is getting the best, most honest performance we can get, and whether that’s funny or sad, we don’t really care. We just want it to feel extra real and we want you to feel like those people you’re watching on the screen can be your next-door neighbors.

It’s just a difference of ethic on set. Most filmmakers spend 90 percent of their time on lighting and talking about shots and the technical aspects; we spend 10 percent on the technical [aspects] and 90 percent on the actors. When you give that much love and attention and focus to your actors, they feel it and not only do they respond to you but you’ve got the intent that you’re making it better. I think when you do that obviously it’ll show in the film.