by Nicholas Rombes
in Columns, Filmmaking
on Jul 6, 2012

Sandy, in her room, on the phone with Jeffrey after the naked, bruised, Dorothy has just revealed—in front of Jeffrey, Sandy, and Mrs. Williams—that Jeffrey “put his disease” in her. This frame comes from a shot that lasts just under one minute and that is so completely and dramatically sincere as to give lie to the notion that Blue Velvet is somehow a parody or an instance of postmodern Camp. Sandy’s question to herself when she gets off the phone with Jeffrey—“Where is my dream?”—offers a momentary gap in the film. For if most of the time we are with Jeffrey, experiencing the unfolding narrative largely from his perspective, in this shot we find ourselves alone with Sandy, who is free from Jeffrey’s totalitarian desires.

On the wall behind her is a poster—which appears near the beginning of the shot—of Montgomery Clift,

whose tormented roles in A Place in the Sun (1951) and From Here to Eternity (1953) offer one model for Jeffrey. George’s courtship of the factory girl Alice (Shelley Winters) in A Place in the Sun features a scene that would be echoed near the beginning of Blue Velvet, as they walk down the sidewalk on Alice’s street at night, talking and flirting, the disaster that looms in front of both of them still a distant star in the narrative, a star whose light has not yet reached this moment. 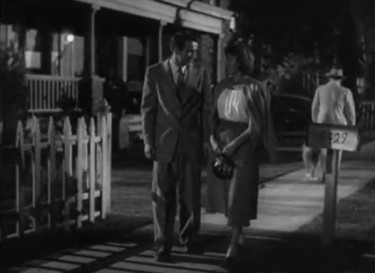 The image of Montgomery Clift in Blue Velvet is actually a reflection in Sandy’s mirror, a reversed image, a man not of Sandy’s era but an earlier one, imagined in black and white, the steady, controlled face of an actor whose most famous roles involved secrets and disguised desires. In the frame from second 6345, Sandy’s head actually touches Montgomery Clift’s chest, near his heart, lending yet another level of meaning to her question “Where is my dream?”