by Nicholas Rombes
in Columns, Filmmaking
on Jul 9, 2012

If you’re of a certain age, you first saw Blue Velvet on VHS (Karl-Lorimar Video) in 1987, in its over-saturated, pan and scan version, which eliminated nearly 40% of the framed image (below). 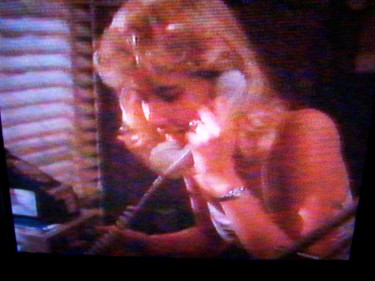 This is Sandy in her father’s home office, on the phone to the police station, trying desperately to reach her father to safeguard Jeffrey, who is on his way to Dorothy’s apartment. “We don’t know his whereabouts at this time,” the voice tells her from the other end of the line. In the VHS version, Sandy is psychedelic, illuminating the screen with her desire. In her analog, 300×480 resolution, she is somehow more real than her digital, DVD version, which cools off the psycho-drama of the Blue Velvet’s roots in American soap operas.

What’s missing in the VHS pan and scan is the wide-screen darkness that engulfs Sandy. The space around her is empty and dark, and although we might say that each digital iteration (including the latest Blu-ray version, which boasts “a transfer and color correction by Lynch himself”) brings us closer to the true Blue Velvet, what are we truly coming closer to other than ourselves? “The past exists,” Slavoj Žižek has written in The Sublime Object of Ideology, “as it enters into the synchronous net of the signifier—that is, as it is symbolized in the texture of the historical memory—and that is why we are all the time ‘rewriting history’, retroactively giving the elements their symbolic weight by including them in new textures.”