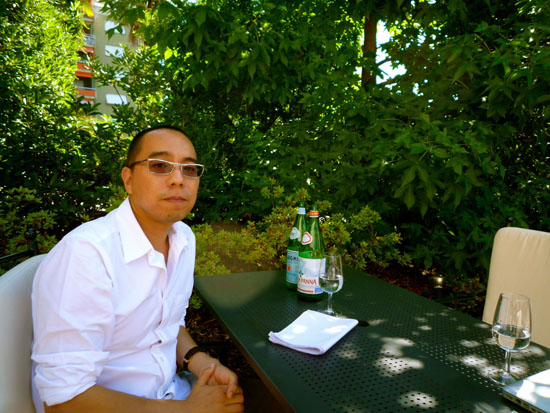 Two years after winning the Palme d’Or, Thai filmmaker Apichatpong Weerasethakul returned to Cannes. It was a rare sort of visit, in which he didn’t go home with any awards, having won three major prizes with Tropical Malady, Syndromes and a Century and of course Uncle Boonmee Who Can Recall His Past Lives. He was there with his new film Mekong Hotel, too small and resistant to categorization to neatly fit within any of Cannes’ proper sections. Now, he’s at the 65th Locarno Film Festival with Mekong and his new short film Sakda, but as the president of the Concorso Internazionale jury. Having served as a member of the main competition jury at Cannes in 2008, and in Venice just last year as head of the Orizzonti jury, he’s been to just about every festival you can name and in myriad roles. At the age of 42, he’s already a veteran of the festival circuit. I was able to sit down with him and briefly discuss his new films as well as his thoughts on the film festival world.

Filmmaker: Film festivals have been a big part of your life, you’ve been involved with them for several years now. What do festivals mean to you personally and what do you think a film festival should be?

Apichatpong: It’s a place to see friends, to update with this big family of filmmakers, and you discover cinema is a universe, it’s big. For me, I haven’t seen that many films, I only saw while I was living in Chicago and the fact that I have only really watched film on the big screen—I don’t really like to watch on DVD—so it’s the only chance for me to see films that I’ve read about. For example, here in Locarno I just saw Antonioni’s The Passenger. So, people were surprised: “you haven’t seen this??” and you would be surprised how many films I haven’t seen. It’s a kind of chance to discover the universe better. I think a good festival is one that has comfortable corners for everyone: if you’re fed up with cinema now you can just go to classic masterpieces everyday. So sometimes you get really bored with festivals that only have one corner.

Filmmaker: You’ve played different roles at film festivals, you’ve shown your films, won awards, been on juries, and now you’re President here in Locarno. How do you feel about these different roles and what is it like being the one who judges the competition?

Apichatpong: Well, you just realize that judging film is a really superficial process because it’s really subjective—there are only a few people on a jury. At Cannes, some films almost win, and then suddenly it just goes to the bottom, and I’m sure if we have more time to discuss it then that film could win a Palme d’Or or something, so it’s not really a concrete thing that a film is the “best”. It’s really helpful to learn this and to not think that you make films to win something. You just enjoy meeting your friends at festivals!

Filmmaker: Your latest film, Mekong Hotel, is a stripped down, one location, mid-length feature. Can you talk about what lead you to make something smaller after the success of Uncle Boonmee Who Can Recall His Past Lives?

Apichatpong: I think because I’ve been working in the visual arts field, where there is more freedom in terms of narrative and in how you show moving images, and I’d love to apply this freedom of the process to making film, so Mekong Hotel is part of that journey to be really relaxed and to concentrate less on the writing and more on the moment of making it and to prepare less and to share this joy and mystery of filmmaking with the audience. So we just sleep at the hotel, and wake up. So, it’s really different from making a feature film where you have a plan and hopefully this working process can apply or influence so-called feature filmmaking.

Filmmaker: That reminds me of something I thought of during the movie. When one of your lead actresses (Jenjira Pongpas) is on the bed and has this monologue and starts crying, I was very moved—but, there’s no context for this character or the story or for me to really understand what she’s saying because it’s just a fragment of an unrealized film. So what does me having that reaction say about cinema?

Apichatpong: Maybe it’s this combination of other movies that you’ve seen come up and you mix things, and the fact that in this scene you see her very relaxed before and nearby is just a script she is reading. So, maybe that’s the thing: with other movies we are moved because the existence of other previous movies we see influences our experience.

Filmmaker: You have a new short film, Sakda, which feels very much like a companion piece to Mekong Hotel. Can you explain how it came about and your idea behind it?

Apichatpong: Yes, it’s about a year ago when I was approached by the producer of La Faute à Rousseau to make something related to [Jean-Jacques] Rousseau. I didn’t know that much about this guy before, and it allowed me to study and I was very intrigued by his idea of man and the existence of man and the freedom, of course, so I tried to link it to cinema and ask Rousseau about the identity of one’s self, because Rousseau believed in the idea of free man, and the freedom of oneself and discipline, but for me I was almost making a movie to ask Rousseau a question: does your self really exist, does your voice really exist when you are in a movie or when you exist in this world, when your voice is turned into something digital. It’s like a car. You call it a car but in fact it’s composed of many elements, of metals and things, it’s not a car, it’s just elements. So our self, maybe, is like that: our mind, our memories.