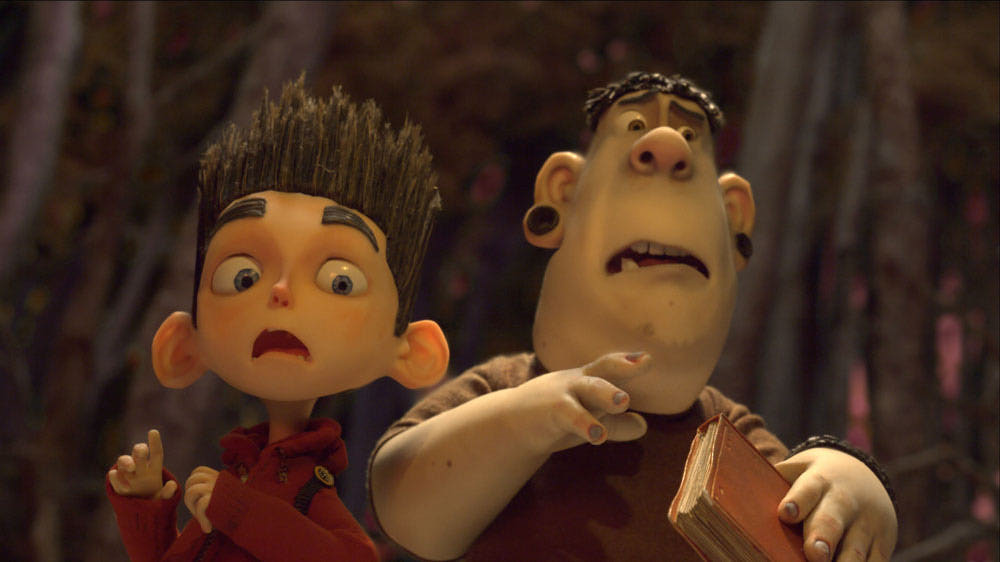 Trailers have the ability to psyche us up, freak us out, turn us off, and lead us very, very astray, but the heightened anticipation is part of the fun, regardless of how accurate a representation of the film that cleverly constructed little bugger ends up being in the end. Recently there’s been a spate of trailers for horror-themed animated children’s films, starting with ParaNorman (pictured above), which opened today. So which of these flicks is most likely to either give your kids nightmares, or send them down a lifelong path of genre appreciation?

Let’s judge a book by its cover and appraise the cover itself!

Of the three film trailers featured in this article, this one about a weird little boy who can talk to the dead has always struck me as the flat-out coolest, earning major points for its use of the vaguely trippy-menacing song “Season of the Witch,” an unexpected choice for what is ostensibly a children’s film. The “from the makers of Coraline” tag is featured prominently, of course, and the distinct quality of the animation and the meticulous detail of the design promise the continuation of aesthetic excellence on display in that 2009 film. However, since the Butler and Fell had very little to do with Coraline, whether or not they were able to capture its surprising narrative depth here is anyone’s guess. Critical response thus far is promising. There were a few different trailer variations released, including this one which trades mystery in for more details about the plot of the film but, on the downside, a more conventional, “Meet Norman” structure complete with the average foggy-voiced narrator, and a TV spot that labels each of the characters  “The Jock” or ‘”he Bully” like they’re part of some kind of ghost-hunting version of The Breakfast Club. Although most components of the campaign have been relatively creative, none have improved upon this first official trailer, elegantly risky in its minimalism.

Count Dracula runs a human-free hotel out of his castle where characters like Frankenstein and The Invisible Man, as well as lesser known ghouls and beasties, can vacation in peace, until things are ruined by an oblivious, if enthusiastic, human backpacker. The most exciting moment visually is the oddly flat, purple and black shot of a tree in the forest suddenly shifting to reveal it is in fact a shaggy monster, and no wonder the style is so memorable, recalling the director’s work on similarly drawn television shows like The Powerpuff Girls and Samurai Jack. Disappointingly, the rest of the film does not appear to be animated with that throwback 2D comic book quality, opting for something a little more generically contemporary. The horn-heavy, rumpus-style music and goofy slapstick humor make it clear that this film is more silly than scary and geared towards a younger audience, but even then, perhaps especially then, the bathroom fixation is a bit unnerving, from the Bigfoot poop joke to a finding-a-skeleton-lady-in-the-shower gag.  Like ParaNorman, this film comes with an alternate trailer, one that introduces a romantic storyline between the tourist and Dracula’s young ward, but there is a reason it has been less widely screened — what works best for this story is a focus on the suggestion that the creatures of our nightmares have secret lives of unfathomable ordinariness. Monsters: they’re just like us.

Fresh off the box office failure of Dark Shadows (how the king of gothic cinema managed to ruin the adaptation of a show whose chief appeal is campy drama in a rain-battered New England town is perplexing), Tim Burton is back with a black-and-white animated film about a boy named Vincent who brings his beloved dog back from the dead through the magic of science. There is a lot of promise here, starting with the film’s premise, a nod to Burton’s charming short film Vincent, in which he imagines a young Vincent Price. The black-and-white 50s aesthetic not only looks great, it emphasizes the film’s melding of two classic American tropes from that time, the sci-fi B-movie and the wholesome family comedy, in a way that suggests both homage and parody. But who hasn’t been burned by a Burton movie trailer before? They always seem wittily amusing and lovingly crafted because, well, they are, but while he has some truly great work to his name, lately, more often than not, Burton’s films can feel a little style over substance. He is most often tripped up by trying to depict supposedly all-consuming romantic love without actually creating the deeper emotional connection that should support it, but because this trailer suggests the only enduring love in Frankenweenie is between a boy and his undead dog, perhaps this film will reverse the curse.

FARIHAH ZAMAN began working in film as a Programmer for Film South Asia documentary film festival before moving to New York in 2005, where she was the Acquisitions Manager at independent film distribution company Magnolia Pictures. In 2008 she coordinated IFP’s No Borders program, the only international co-production market in the U.S., before becoming Program Manager of The Flaherty Seminar until 2010. Farihah currently writes for The Huffington Post, AV Club, and online film  journal Reverse Shot, among others. She is co-directing a documentary, REMOTE AREA MEDICAL, set for release in 2013.