“THE STONING OF SORAYA M.” 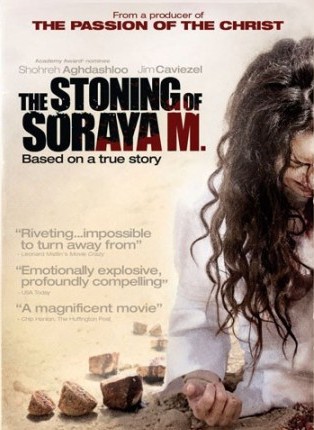 This powerful adaptation of a 1994 book by French-Iranian journalist Freidoune Sahebjam of the same title exposes the inhuman practice of stoning women accused of adultery, which supposedly continues to this day.

Jim Caviezel stars as Sahebjam, who after his car breaks down is towed to a small Iranian village where he’s approached by Soraya’s aunt (Shohreh Aghdashloo), who reveals to him the village’s dark secret. The film then is told in a flashback as we follow Soraya (Mozhan Marno) as she attempts to provide for her two sons and two daughters though she receives no support from her husband, who spends most of his time away from them with another woman.

When she won’t give him a divorce, Soraya is offered to work for a neighbor who recently lost his wife in the hopes she’ll earn enough money to provide for her children after a divorce. But her husband can’t wait that long and devises a plot to peg false charges of infidelity against Soraya — unsympathetic that if charged, his wife will be dragged to the middle of town, buried waste deep in the ground and stoned to death by all the men in town (including her father and sons!).

From the producers of The Passion of the Christ, they once again show the atrocities done to their character in hard-to-watch graphic detail (though at the height of the drama an interruption happens that seems to be taken straight from a Fellini film).

Directed by Cyrus Nowrasteh (mini-series The Path to 9/11), the film has been banned in Iran, but has brought the attention of stoning to the UN, which late last year after the film was in theaters, condemned stoning and other human rights violations in Iran.

Aghdashloo gives a tour-de-force performance and Caviezel shines in the little screen time he has.