Toronto Film Festival 2012: In From the Cold 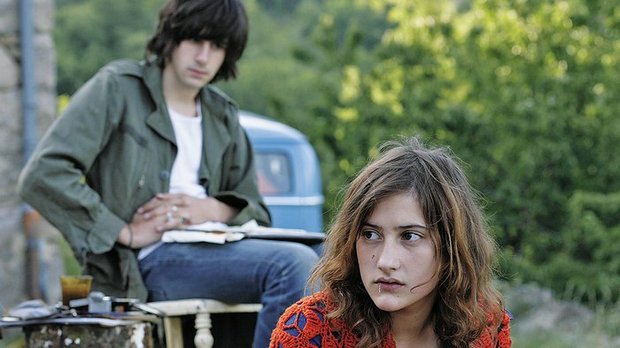 Olivier Assayas' Something in the Air

The 1970s were a time of reckoning for the radical social transformations of the 1960s; with the left shattered by the specific political interests of its sectarian ideologies, and the mainstream culture seeking a shift inward, toward the ethos of the self (and, ultimately, its apotheosis in the greed of the 1980s), the ’70s are often overlooked as the era in between the good times. This year’s Toronto International Film Festival featured several films that grappled with the 1970s and its legacy, each specific to its place, each an examination of the politics of life in the era when everything fell apart.

Olivier Assayas’ follow up (and, in many respects, companion to) his epic 1970s thriller Carlos, Something In The Air follows Gilles (Clément Métayer), a young artist and filmmaker trying to find his place in the revolutionary political moment of early 1970s France. Watching his generation struggle to find itself in the aftermath of the expectations fomented by the demonstrations of May 1968, Gilles seeks to reconcile his passion for art (often seen as “bourgeoise” by his contemporaries) and the electricity of being young, angry and full of passion for change. If by the film’s finale, Gilles is able to recognize cinema as a form of personal resurrection, a way to restore images and emotions seemingly otherwise lost, he and his friends have long since diverged on the road to self-discovery.

Each of Assayas’ beautiful young characters makes his or her own place in the world, choices that range from shacking up with a new lover in a foreign land to a continuation of the struggle toward more violent, meaningless ends (tactics which would come home to roost in Carlos). This is a portrait of the left in disarray, its frayed imagination unable to coalesce the energy of its big, revolutionary moment into a sustainable way of life. As the French left spins itself into an increasingly exhausted, fractured reflection of its moment of greatness, Gilles (and, by extension, Assayas) has the good fortune to take refuge in the cinema where, against all the odds, a filmmaker is born. A highly personal film that takes the intimate subject of Assayas’ masterpiece Cold Water and expands it outward, from the pain of personal loss toward the redemptive power of art, Something In The Air is a gorgeous, sprawling movie whose French title (Aprés mai, literally, ‘After May’) provides the cultural context for the struggle between the disillusioning fractures of youth politics and a seemingly endless supply of personal possibility.

Possibility also shapes Treva Wurmfeld’s Shepard & Dark, a complicated, moving portrait of the friendship between the American playwright and actor Sam Shepard and Johnny Dark, a writer and archivist living and working in small town New Mexico. The pair met in the late 1960s when Shepard married the actress O-Lan Jones and Dark was married to her mother. The quartet formed an unlikely family unit that lived together during the 1970s. The friendship the two men developed during those years inspired a long correspondence which, despite their lives spinning in opposite directions — Shepard toward acclaim, Dark toward contentment with his own carefully structured life — created a personal archive of letters which show an incredible depth and good humor between the two men.

It comes as no surprise that, when they are reunited by the decision to publish their letters, a decision that would enrich the public’s understanding of Shepard’s private life and provide Dark with the sort of literary legitimacy he craves (although he might never admit it), the conflicts begin and the friends, usually alone with their words and their thoughts, are forced to reconcile their disparate lives. Wurmfeld’s documentary is a striking exploration of family and male friendship and of the ways in which the countercultural dreams of the 1970s allowed these men the opportunity to shape their lives in ways that are at once very different in their result and strikingly similar in their solitude.

Sophie Fiennes’ The Pervert’s Guide To Ideology, her second film with the Slovenian Lacanian political philosopher Slavoj Žižek, takes movies as its illustrative subject, using Žižek’s brilliant analytic style, often counterintuitive and provocative, to illustrate cinema as a tool for understanding ideology. Not one particular ideology, but ideology as a mode of thinking, a way of seeing the world, an all-encompassing tool for interpreting the world. And while Žižek hops across the history of cinema, music and advertising (and their vast intersections), the film is centered by bravura passages on two 1970s masterpieces — Martin Scorsese’s Taxi Driver (which Žižek situates alongside John Ford’s The Searchers as an example of the Lacanian notion of violence as “an implicit admission of impotence” by “a naïve benevolent agent who sincerely wants to bring to the Vietnamese democracy and Western freedom”) and Stanley Kubrick’s A Clockwork Orange, in which Beethoven’s universally beloved Ode To Joy soundtracks one of the film’s sprawling and deliriously fun arguments in favor of dismantling the populist understanding of Beethoven’s classic as an “empty signifier,” reasserting its role as the soundtrack to various justifications for atrocity by everyone from the fascists to the Maoists.

Of course, Žižek is not all sweetness and light, and perhaps his harshest moment is reserved for the middle of the film when, almost in passing, he presents a troubling apologia for the Soviet invasion of Prague in August 1968, another critical moment of state violence that provides context to the disillusioned sadism of Scorsese and Kubrick in their aforementioned films. Arguing that the Czechs’ Velvet Revolution would have sputtered out anyway and that the Soviet invasion merely saved the Czechs from embarrassing themselves later when their revolution would have failed, Žižek spares no one, least of all himself. The idea is a troubling one, highlighting that Žižek sometimes leans dangerously toward the certainty of his own inclinations, but it also underscores one of the film’s pleasures as a cantankerous challenge to the viewer to be alert and vigilant, lest one’s love of movies get in the way of recognizing the form’s totalitarian possibilities.

Set in 1980, in the dying embers of the prior decade’s radical dreams, Christian Petzold’s Barbara follows the film’s titular heroine as she makes her way from East Berlin to work as a doctor in a small, rural hospital. A new arrival whose big city bona fides earn her the instant distrust of many of her coworkers (and, of course, the Stasi), Barbara (played with chilly longing by Nina Hoss) has plans of her own: to escape by sea to Denmark, to defect and reunite with the West German lover who promises her a better life. Of course, the Stasi seem alert to the threat, continually demoralizing Barbara as they search for clues to her plans, constantly reasserting her position as a servant to the power of the state.

Petzold’s film is a powerful reminder of his gifts and promise as a filmmaker; of a piece with his terrific Beats Being Dead segment in last year’s Dreileben trilogy, Barbara is full of tonal command and a slow, burning patience. I’m not sure that another director would have the ability to pull off such a stoic, complicated story, one that marks a steep shift in the value system of its protagonist who, ultimately, must choose between one form of debasement in the East and another, perhaps more insidious set of restrictions, in her dreams of freedom. Barbara is Petzold’s antimelodrama, a feminist film that provides a crystalline look back at the lost idealism of the Communist East through a mirror, reversing expectations and asserting a more complicated idea of the self.