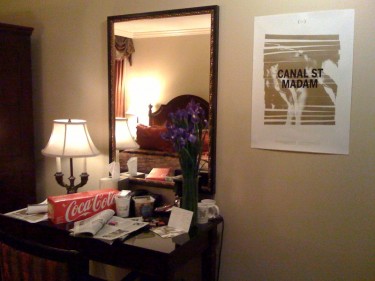 So here we are at SXSW for the world premiere of a documentary I produced, The Canal Street Madam. My badge, accordingly, identifies me as Mridu Chandra, “The Canal Street Madam.” I can’t say that we thought of that when we named the film, but it’s definitely my favorite film festival badge so far!

We landed in Austin Friday afternoon with what seemed like enough time to rent our car, ditch our winter coats, and get to the Filmmaker Lunch at Troublemaker studios. We drove up to the studio to find that the weren’t letting more people in, because it was already 2:30 and they were getting ready to end the event, so ok, no big deal, we decided to check in and have a team meal together.

I’m here with Cameron Yates, the director, our co-producers Esther B. Robinson and Basil Tsiokos, our executive producer Philipp Engelhorn, & our Social Media Coordinator Lauren Burger. It was really the first time we have been able to relax together in the past two months. When we got the phone call that we got in and that we’re in competition, there was a feeling of a major accomplishment and euphoria that we celebrated with a drink. Then came a sudden feeling of panic. We still had a lot to do to finish the film let alone prepare for the festival. Working backwards from the dates of the festival, we figured we had five weeks to finish editing, secure finishing funds, complete the sound design, the motion effects, and the color correct before the fed ex deadline to ship our film to SXSW.

But now, finally, we are ready to start the next phase of our film’s life—getting it out there and finding a distribution home for it. While I realize that this can take some time, there is always the dream of selling it and getting a good review here in Austin!

We began by combing through our film pocket guides and scheduling in the panels we want to attend and the films we want to see. It’s a terrific lineup and an honor to be included in it. Realistically, I know I won’t get any time to see much before our premiere, but I’ve got a lot of great stuff circled for Tuesday on.

Some of us hung posters for our film, others worked on finalizing our website and uploading our newly finished trailer onto it… and Cameron went to set up a hotel room for Jeanette Maier, the former madam of New Orleans and subject of our documentary, who’s coming to town for the premiere on Monday. He hung a poster in her room, and set up the desk with a few of her favorite things—a carton of Marlboro lights, a box of chocolates, a case of Coca Cola, and some fresh flowers.

It’s our world premiere, so yes, we’re nervous to see it with an audience, but I imagine she is even more so! — Mridu Chandra