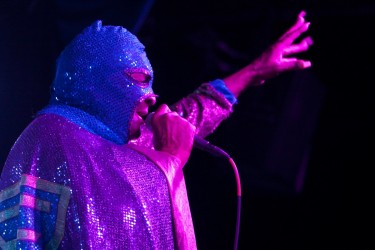 THE PREMIERE. I’m not new to the film festival experience but because this is my directorial debut things have really ratcheted up emotionally this time. My sales rep, Josh Braun, and my publicist, Jessica Edwards, have both been working hard to make sure the world premiere of my film, The Weird World of Blowfly, goes as smoothly as possible and has all the right people in attendance. They’re also working hard to keep me from hyperventilating and passing out! It’s a very exciting moment, just before the premiere, filled with anxiety and catharsis.

The film is premiering at the Alamo Drafthouse, a very cool theater where you can order food and drinks from your seat and have it delivered to you while you watch. It sounds like it’d be terribly disruptive or distracting but the staff is very unobtrusive and efficient. I showed up at the theater about an hour early to do a tech check and make sure the film looks and sounds like it should — what a weirdly amazing feeling to finally see the footage on an 80-foot screen! And the sound was killer. I was happy to see the theater staff stop their work as they cleaned the room and watch the film unfold, even if it was just a few select minutes from the opening.

Outside, people had been lining up for hours so I chatted with them while I waited for Blowfly to show up. A few minutes later Clarence “Blowfly” Reid, his manager Tom Bowker, and the rest of the Blowfly band arrived, so we shuffled into the theater (after a quick photo op!) and waited for the lights to dim.

I was too fidgety to sit during the film so I stood by the door and tried to keep one eye on the screen and the other on the audience. There was some fear that people might leave, depending on their tolerance for vulgar (but hilarious) raps and songs, but not only did everyone stay, they laughed the whole way through! (Except for one lady who fell asleep but she looked older than Clarence so I give her credit for showing up at a 9:30pm premiere.) And not only did they watch and enjoy the film, everyone stayed for the Q&A.

Because this is my first time screening a film I directed, I have a hard time knowing how well it went – I’m too emotionally invested in it. Yes, everyone liked the film very much and I got a lot of congratulations from people on the way out, but was there something else I could have done? Should I have put up more posters, made more phone calls, or sent out more press kits? I know I should just relax and enjoy it, and that this is only the first step in the long process of selling and distributing the film, but a film only has one world premiere and one has to make the most of it. As Jessica told me a few days ago, now the real work begins. — Jonathan Furmanski