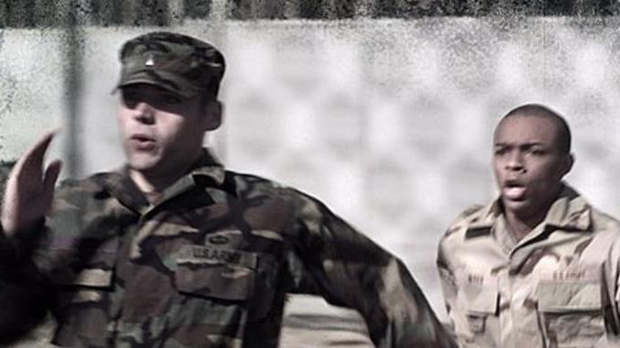 by Brandon Harris
in Directors, Interviews
on Dec 12, 2012

An intelligently written and genuinely felt Iraq War drama, Allegiance is perhaps the first film about the way the conflict shaped the lives of those who prepare to go to battle that has been written, produced, directed and mostly financed by veterans themselves. The directorial debut of Michael Connors, the picture has an unforced verisimilitude few films about military life can match. Allegiance portrays an insular community with its own moral logic, in this case an American military regiment of New York National Guardsmen being called up to active duty in Iraq on the eve of the Sadr City/Fallujah nightmare of 2004. What pegs it as a real standout, beyond the fine performances and moral complication of its narrative, is the gentle way Connors finds to show the nuances of this peculiar brotherhood, where men who inhabit a brutally hierarchical structure but nonetheless train to kill and die together (and for each other) maintain a sheer of egalitarian camaraderie. At least until the eve before their newest deployment.

Many thought that the battle for Fallujah would be the first Vietnam-level firefight of the war for American soldiers, and although it turned out less violently than many predicted (at least as far as American casualties were concerned), the anticipation of that engagement hovers over Connors’ military melodrama. As class resentment and ennui build within the unit after one officer’s deployment is suspended because of his politically connected family while another is forced to go fight despite the specter of his child having terminal cancer, the possibility of mutiny rears its ugly head. A melange of genres, the film does a pretty outstanding job of applying the codes of each (prison break movie, love story, political thriller) into the context of a typical American deployment to war.

Allegiance, which premiered at this past spring’s Seattle International Film Festival, features a terrific cast including Aidan Quinn, Malik Yoba and Bow Wow, but it’s newcomer Seth Gabel, (TV’s Dirty, Sexy Money and Fringe) who steals the movie, issuing a memorable performance as the connected politician’s son who is caught in the middle of the deployment firestorm.  Connors, who served in the Army from 1997 to 2001 before heading to Columbia’s grad film program, was previously the director of Recalled, an award-winning 2006 Columbia thesis short that was put on hold when Connors was recalled to active Iraq War duty weeks before its initial shoot date. Both that film and his feature debut, an expansion of the short, go beyond simply offering us a fly-on-the-wall perspective on the fears and desires of our servicemen in the time before their darkest hours; they ask us to remember what it’s like to live in a country at war, something everything in our culture seemingly asks us to forget.

Allegiance appeared on various cable VOD outlets this past Friday; it opens for a theatrical run in New York City on December 28th. Filmmaker: One of the most intriguing aspects of the movie is the palpable ambivalence we feel toward many of the characters’ choices – no one is necessarily right in this situation from a moral standpoint. Was that a starting point for you, to make something of such moral ambiguity, and if not, what was?

Connors: Yes, one of the things that I always found interesting about my own military experience is the constant choice between “two rights” or “two wrongs.”  Most military situations, whether war or peace, are never clearly defined as “black and white,” no matter what the recruiting posters or politicians say. To me, the greatest war movies, from Platoon to Saving Private Ryan, always try and present the audience with conflicted characters in near-impossible moral situations. We, as an audience, then put ourselves in the characters’ shoes and struggle with the same dilemmas they’re presented with. We may not always agree, or think we would make the same decisions, but it makes for an interesting and challenging experience as a viewer – especially if the characters make decisions that ultimately challenge our own belief system.

Filmmaker: Even with the war in Iraq having drawn to a close and the mission in Afghanistan seemingly waning, are soldiers still having to be recalled at the levels they were when you served?

Connors: I don’t believe that’s the case anymore, though there are still some National Guard units and select groups of reservists serving in Afghanistan. Allegiance focuses on the period [2004-2005] following the Iraq invasion where the military and political establishment had to face the fact that all their assumptions about Iraq, from the faulty intelligence to “they’ll greet us as liberators,” proved to be totally wrong. The Pentagon was scrambling to find the necessary forces and rotational schedule to support a much longer, complex war. After exhausting the active forces, they turned to the National Guard and this presented a situation of call-ups that were unprecedented since World War II.

Filmmaker: How did your experience in the armed forces shape how you chose to portray this environment and the people who inhabit it?

Connors: I served on both active duty and in the National Guard – two very different military worlds. Most of my time was as a Ranger in a great active duty regiment, the 27th Infantry, “Wolfhounds” – the famed unit that James Jones wrote about in From Here to Eternity and The Thin Red Line. Today, the Wolfhounds are one of the most highly decorated light infantry units in the Army, having served in both Afghanistan and Iraq. But my last eight months in the service was in New York City with a National Guard unit stationed at an armory in Jamaica, Queens. They were truly “weekend warriors” – civilian soldiers with regular jobs and lives who were totally upended in 2004-2005 when they were asked to deploy to Iraq and fight alongside active units. To me, that made for a much more interesting group of soldiers to explore rather than our active forces who are much younger and much more prepared for the rigors of combat overseas.

Filmmaker: Your cast includes both newcomers and familiar faces – did you have to adjust how you direct for each person, given their level of experience, their methods, etc.?

Connors: One of the greatest joys of working on the film was the experience I had with our amazing cast. We were so fortunate to have so many talented actors willing to do the movie, despite the low-budget and quick schedule. Each actor brought a ton of experience and unique method of working, so as a director the challenge and the joy was learning and collaborating with each actor. One of the things I’m most proud of is the ensemble nature of the film. Each actor made their role so unique, which really helped make the unit portrayed in the film more relatable to the audience. They weren’t just a monolith of shaved heads, but individual soldiers with different viewpoints about the war and the deployment – which, in my experience, on both active duty and in the Guard, is much more realistic.

Filmmaker: How do you know when you’re ready to shoot a scene? Does the mood on the set have to be just right? Do you need everything perfectly settled and prepared, or do you prefer to invite some chaos or an element of surprise into your frame?

Connors: I tend to be one of those directors who does a lot of preparation before shooting. I like the previsualization process, working from storyboards and shot lists. I found this very helpful in the fast paced, low-budget world of indie filmmaking. You simply don’t have the time to wait until things are perfect to start shooting. The more prep you do gives you a better idea for how a scene with ultimately cut together – and actually allows for more freedom on the set to improvise if necessary because you have worked out several different ways the scene could play before even stepping out on the set. I’m also a big fan of rehearsing with actors. We were very lucky to get several of our principals for a week before shooting. We talked and walked through many of the big scenes – including doing a full-blown rehearsal of the fight sequence, with the stunt coordinator on the location, before principal photography.

Filmmaker: Was this a difficult project to finance?

Connors: I guess relative to other independent film financing stories I’ve heard – no.  We got very lucky in that a majority of our financiers were veterans or friends and family of veterans. It took us a little over a year to raise the money, and I think they were all interested in seeing a story about the military that they could relate to from their own experiences.

Filmmaker: What was the most difficult thing to make work in post-production? Were there scenes or sequences that you thought would be crucial to the story that didn’t make it in the film? Performances that were particularly difficult to get right?

Connors: The only scenes that didn’t make it into the film were several brief flashbacks of Sefton and Leela’s life before the call up. They turned out great, but felt out of place in terms of the frame of the story. I really wanted to achieve a sense of claustrophobia in the film; I had always imagined the story in the genre of the “prison escape” thriller. By letting the audience off the base in the flashbacks worked against that aesthetic and the information conveyed in the flashbacks ultimately was unnecessary once the actor’s performances began to take shape.

Filmmaker: First-time directors often feel like completely new people by the time they’ve finished a film – did making this film change you? By the end of shooting, were there things you had learned or skills you had acquired that you wished you’d had at the beginning?

Connors: I certainly learned a ton throughout the whole process – from financing all the way through shooting, post and distribution. I would say the biggest learning experience as a director [is that] you need to know everything about every facet of the process. Not that you will try to do everyone’s job – quite the opposite – because you rely heavily on so many people in so many areas other than your own, you need to know how to communicate your vision clearly and quickly to the whole team.