I took note of the videogame Heavy Rain after reading Seth Schiesel’s wildly positive review in the New York Times. Here are the first two grafs: 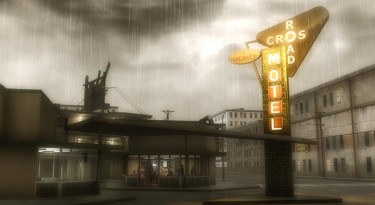 The big storm has been raging for days. The winds around the eaves make me lonely, melancholy, and yet my guilt forces me forward in search of redemption.

I have probably spent 10,000 hours playing various sorts of electronic games. But no single-player experience has made me as genuinely nervous, unsettled, surprised, emotionally riven and altogether involved as Heavy Rain, a noir murder mystery inspired by film masters like Hitchcock, Kubrick and David Lynch.

After that, I couldn’t help but download the demo on my PS3 and play it through. I came away a little mixed. The game, which takes you along the search for a young boy kidnapped by a serial killer, didn’t seem as revolutionary and “free” as I had been expecting, and the all-encompassing gloom felt too familiar from Max Payne and episodes of C.S.I. Las Vegas. And, I wasn’t keen on the controls, which required a kind of unnatural finger yoga. I spoke to two friends about it, though. One said the cool stuff, the story branching, kicks in later, and another said that he found the little gymnastics his fingers had to do an interesting simulation of real world actions. So, I will try to pick it up and play it sometime soon.

What’s really being promoted with Heavy Rain, though, is not the digit-al calisthenics but the emotional immersion. Speaking solely for myself and based just on the demo, the jury is out. Neil LaBute, however, must have been impressed. He’s made a documentary about the game that kicks off from its concept to engage film directors and actors like Peter Bogdanovich, Samuel L. Jackson and Nicolas Roeg to discuss issues like ethics, love, and hate. Dan Crowe, who made the doc with LaBute, quotes the director in The Guardian:

Says LaBute: “I was interested in how people’s emotions – love, hate, anger – fuel their work. Emotions do different things to different people. They can make creativity flow or make it stop, abruptly. I’m interested in how love can be represented in art. Who shouldn’t be in love with who? Why do some people turn away from the love of another? What’s the wrong type of love. Why do some people never fall in love? How far would you go for love? I have walked away from a relationship with my father to save my relationship with my daughter. That’s quite far.”

But most pressing as a concern for both of us was the difference between gaming and film, and how that might – or might not – be altered by Heavy Rain. “When you’re in the cinema it’s a passive experience – you sit and watch what’s been made,” says LaBute. “That’s the essential difference. To date film has been the medium that best illuminates and explores emotions. Nic Roeg – who’s in the documentary – has spoken about about wanting buttons on the seats of cinemas so audiences could participate in the fates of characters. I think Heavy Rain is a significant step in that direction, involving the viewer in a profound way, making them almost like the co-writer or co-director.”

I’m not sure if the below is the full doc (in which case it’s a short) or an excerpt, but it includes the folks quoted above as well as creator David Cage. In this interview in Fast Company, Cage explains why he made a game with four protagonists: 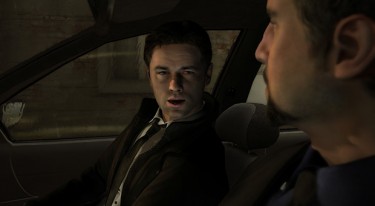 This is something I explored since my first game Omikron. I am very interested in schizophrenia in many ways, but I also believe games are a great way of seeing how it is to be someone else. In Omikron, your soul can be reincarnated into another body. In Fahrenheit, you end up controlling three characters, which was very interesting and very new. On Fahrenheit, someone told me, “People won’t be interested in play a lot of characters; they want to play the hero–they won’t feel empathy for them.” And I thought that was so wrong! When you go to watch a movie you can feel empathy for any character on screen, whether it’s the hero, or the girlfriend of the hero, or the best friend, or whoever. TV series have grown through the last few years and made big use of narratives with several characters at the same time, whether you think of Lost or Desperate Housewives. It demonstrates that the audience can feel empathy with many characters and not just with one. So with Heavy Rain, the idea was to continue to explore this direction. I wanted to have four full stories that would be interlaced, that could collide at some point, that paths can cross.