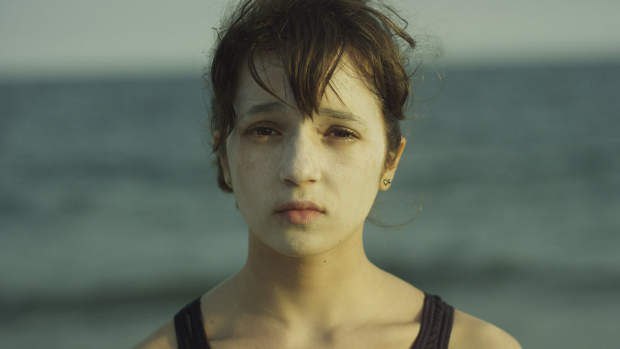 It Felt Like Love is about a young girl struggling to form connections — with herself, her peers, and with an intriguing older guy she sees on Rockaway beach — and her willingness to degrade herself to experience intimacy. When I started writing, in 2011, I wanted to create an unsentimental coming-of-age film and show outtakes from childhood: the lonely moments, the surges of false confidence, and small humiliating details that are often buried in our memories. I wanted to explore taboos around female adolescent sexuality and identity.  I thought the content and character were relatable, but the responses I got to the script ranged from “It’s really dark” to “It’s way too dark!” It wasn’t until I transitioned into the director’s seat and started casting that I decided the script needed to be reigned in, pared down to a few essential powerful and complicated moments, in part because I wanted the young actress in the main role to actually be young, with palpable vulnerability, and not over 18. This legally limited some of the choices I could make, and I had to sacrifice a few of the most difficult scenes, in favor of producing a film that aligned with my directorial sensibilities while keeping only the necessary provocative content. Even with those revisions, it was really challenging to cast. Being a writer/director/producer is like having multiple personalities, an internal battle, where you are forced to reason and compromise with yourself. Looking back, I am happy the film has evolved into something more restrained.
Sundance Responses 2013