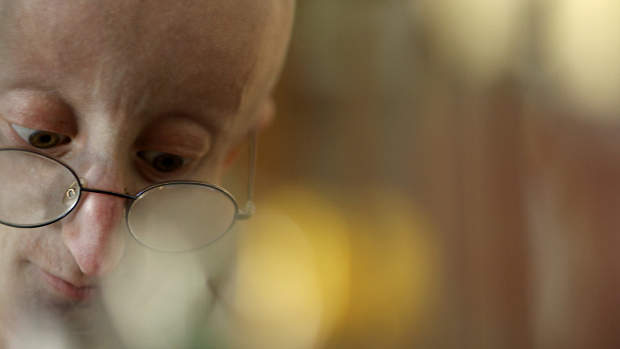 Sacrifice is an interesting word when you think about it in context of our film, Life According to Sam, because one of the main themes of the film is sacrifice. Our film is about a mother and father, Dr. Leslie Gordon and Dr. Scott Berns, who are trying to find a cure for a fatal disease that is rapidly aging their son, Sam. Progeria is one of the rarest diseases in the world and children rarely live past their teenage years. The film picks up with Sam’s mom, who is racing against the clock to try and find the first drug treatment for her son who has just turned 13. They are in an unimaginable race against time. To win this race Sam’s parents must make thousands of sacrifices.

So when we hear the question “what did we sacrifice to make this film,” the first answer that pops into our heads is time.  We spent over three years making this film. It was probably the longest project we have every tackled. It’s interesting because a film, like a disease, can become all-consuming. You start to forget that there is another world around you. Family, friends, vacations, sleep, health all fall by the wayside in service to the film as we documented their lives for close to three years. We were there to capture every high and low they experienced.  We watched as they walked a fine line between sacrificing themselves to save their son and making sure they never sacrificed their time with him. They made sure to put him first, to enjoy every baseball game, every graduation, every band recital they could. To Sam’s parents, sacrifice is actually a selfish word. A word that implies you gave something up of yourself that you regret that did harm to you. We don’t think the word even applies to what we do. The moment we agree to make a film like this we know what we are getting into and how hard we have to work, but in the end we are just filmmakers telling a story. We are not living that story. I guess what we are saying is we get to walk away. So really how is that a sacrifice. We do, what we do, to tell stories that move others, and hopefully teach us about ourselves and make us think about the choices we make in life.