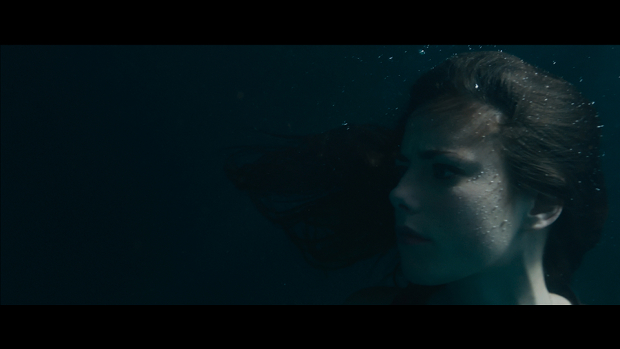 Emanuel and the Truth About Fishes is Francesca Gregorini’s second feature film, but her first solo directorial undertaking. Influenced strongly by surrealism and her own personal struggles with loss, Gregorini’s film, which she also wrote, follows a teenage girl, Emanuel (Kaya Scodelario, Wuthering Heights), who struggles to comprehend her mother’s death. When a woman eerily similar to her deceased mom moves in next door, Emanuel finds ways to interact with her and develop a new relationship, learning they have more in common than anticipated. Emanuel and the Truth About Fishes explores how both children and adults cope with death and grief. Playing alongside Scodelario is Jessica Biel (The Illusionist) in a vastly different role than usual as Linda, the eccentric neighbor. Alfred Molina (Chocolat) and Frances O’Connor (A.I. Artificial Intelligence) also star. The film premieres today in competition at the Sundance Film Festival.

Filmmaker: What attracts you most to surrealism in film and art?

Gregorini: The fantasy and dream aspect, which I would argue in many ways is the true reality, when you peel away all the noise. Surrealism brings into focus, into the light the feeling of reality that lies just beneath the “real” reality. To me, that tells the story just as powerfully, sometimes more powerfully than the literal. Surrealism excites my brain because it speaks to it on its most primal, subconscious level. I am not a doctor of early childhood development, but I imagine that when we were first experiencing the world, as infants, the whole world seemed very surreal – shapes and color and sounds that we could still not make literal, logical sense of, coming at us and floating by. For me, surrealism strikes that primal chord of understanding, making sense of life, when nothing actually does make logical sense. It’s the distilling of the essence of things and letting them sing rather that getting stuck in the details that weigh down, and sometimes obscure, the meaning.

Filmmaker: After co-directing Tanner Hall with Tatiana Von Furstenberg, did you enjoy this solo endeavor?

Gregorini: I loved directing with Tatiana because she has been my best friend for over 20 years, so we know each other inside-out, our strengths and weaknesses, and work seamlessly together. And it was great, first time out of the gate, to have your best friend to turn to when things were going tits up and know that she had your back and that you guys together would navigate through it, as you had navigated your whole lives up to this point. I wouldn’t rule out another joint venture, if the right project came along. However, I really loved the solo adventure of directing Emanuel. It gave me the opportunity to not negotiate or compromise on anything, and just have my singular voice speak. In some ways, I feel it made me braver. I took more chances, went out further on the limb – perhaps because I had the first directing experience already under my belt, or perhaps because I thought, “If this doesn’t work, I have no one to answer to but myself, so I’m going for it – happy to die on my own sword, if that’s what comes to pass.” I can say that on the last day of shooting Emanuel I walked off that set knowing I was a director. I, for sure, had found my calling. And that is an incredible feeling to have. How the film will be received, what kind of career I will have, that is an entirely different question, but the self knowledge is priceless.

Filmmaker: You have spoken about how Emanuel and the Truth About Fishes is partially autobiographical, specifically its themes that deal with loss and sadness. Why did you choose a young girl as the lead character?

Gregorini: Perhaps because I will eternally see my self as a young girl. I think all of us creative types suffer from some sort of arrested development that allows us to remain in such close contact to our creative side, which ultimately is child’s play. But, also because as a young person, that’s when you have your first brushes with true loss and sadness and are really not equipped to deal. Or rather your methods for dealing are unique because you are literally making them up as you go along. But as we all know, loss and sadness doesn’t end in childhood, if anything it grows fangs and builds muscle and becomes a formidable adversary. In Emanuel, the young girl is unable to process her loss and when her character crosses paths with an adult, even less equipped to process her own loss, that’s where both the insanity and healing take place. I think often as children, we silently grapple with our own loss and sadness but then on top of that, consciously or unconsciously, are the carriers of our parents and/or intimate adults loss and sadness. We are perceptive, empathic little sponges that take it on board, carry the sadness, and the lies the adults weave for themselves in an effort to shield themselves from their painful truths. As children we are certainly not equipped to deal with loss and sadness, never-mind the intricacies of the webs adults build to shield themselves from it, but the sad truth is the the adults are often not equipped either. Sometimes it is the clear eyes of the child that sees the only shaft of light, a way through the mire.

Filmmaker: What are you most looking forward to at Sundance this year?

Gregorini: Celebrating with all the people that made making this film possible. It really does take a village, literally. A big part of that village with be up in Sundance, as well as a great deal of my family and friends, who have supported me in this very long journey to get Emanuel to the screen. Having them there means a great deal to me. I am also very much looking forward to seeing al the other filmmakers films, if I can get tickets to see them. Getting tickets is a bit like winning the lotto I am quickly realizing.

Filmmaker: There are many websites and blogs out there that have followed the casting of your film quite closely, especially since two of your leads (Jessica Biel and Kaya Scodelario) have large fan followings. Can you speak a bit about the casting process and the actors you ultimately chose?

Gregorini: I had a fabulous casting director, Deb Aquila, who fell in love with the script early on and stayed on for the several years that it took to get Emanuel off the ground. That was key. She’s very well respected in this business so when agents got a call from her they listened and were willing to read and pass on to their clients. Access is key and she provided that for me as well as so much more over the years in terms of support and friendship.

I wrote Emanuel for Rooney Mara, because having cast her in her first film (and mine), Tanner Hall, we had become close friends and post Tanner we were both looking for our next projects. So, I decided that I would write her a film. She was instrumental in feedback early on in the script writing process, literally getting the pages as they came out of the printer. Unfortunately, it took years to get Emanuel off the ground, so it was no longer believable that Rooney could play a seventeen year-old. Besides, with all of her scheduling conflicts we decided it would be best if I moved on and searched for a new Emanuel. Enter the fabulous Kaya Scodelario. But actually not that quickly or easily. First, I met and read with what seemed like every young girl in Hollywood. By no means a painful process, however I couldn’t find Emanuel – not because the girls weren’t great, some even blew my mind, but they just weren’t Emanuel. And because the whole movie rides on Emanuel, I was flat out unwilling to make the film unless I found the exact right girl, which I found in Kaya.

Jessica Biel was not on my short list of actresses for the role of Linda, simply because I had not seen her do anything like what was required for the part of Linda, but that is precisely what drew her to the part. She knew she had it in her and she was right. We went to lunch, she asked for an audition and she knocked it out of the park. She really is going to be a revelation to audiences in this role.