Sundance is the World, and the World Speaks English 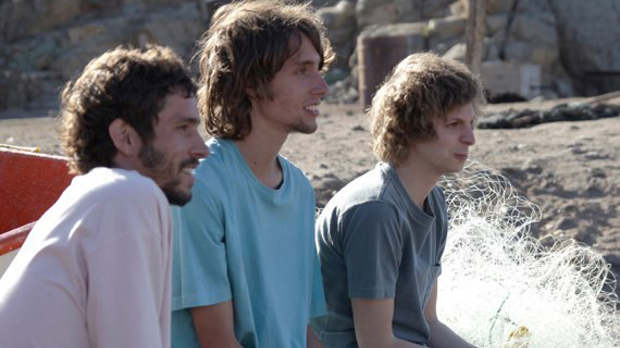 When I was buying groceries on my first night in Park City, throughout the supermarket were out-of-towners with red lanyards around their neck stocking up on food, hoping to eat well enough not to get sick. Ahead of me at the checkout was Focus boss James Schamus, who told me he already had the flu. While I was in line, the cashier remarked how Park City was being taken over by people from New York and California. “And Belgium. There was a guy from there in here earlier in my shift. And also one from West Africa.”

At Sundance, you see everybody – numerous journalists, filmmakers and programmers, converging on this small Utah town from NYC and LA – but it’s also true that the focus of a huge percentage of those attendees is American product, the films that most people want to read about and watch. My own (tentative) schedule for Sundance is admittedly dominated by U.S. titles, but I began this year’s fest by delving into international filmmaking, seeing Crystal Fairy, a new film by the excellent Chilean filmmakers Sebastian Silva (The Maid, Old Cats) which is in competition in the World Dramatic strand, and then attending the welcome lunch for international filmmakers.

Crystal Fairy is one of two movies the New York-based Silva has at the festival – the other being Magic Magic – and both are set in his native Chile. They both also star Michael Cera, who SFF staffer Charlie Reff called Silva’s “muse” at Crystal Fairy‘s world premiere. Cera plays Jamie, an obnoxious, self-centered American twentysomething living in Chile who, inspired by The Doors of Perception, plans a road trip with his roommate Chacho and his two younger brothers (the trio played by Silva’s siblings, Juan Andrés Silva, José Miguel Silva, Agustín Silva) which will culminate in them taking mescaline on a remote beach. However, his plans for the perfect trip (pun intended) are ruined when he drunkenly invites a fellow American he’s just met, a hippie dippie chick who calls herself Crystal Fairy (Gaby Hoffman) to join them on their spirit quest.

The film is based on true story: about 10 years ago, Silva and his best friend took a strange woman, also called Crystal Fairy, on a trek to take mescaline on the beach. As Silva was so familiar with the (literal and figurative) territory of the movie, that all he had prior to filming was an 11-page outline, and then relied on his cast to improvise the action from there. Despite that, Crystal Fairy never has the unfocused, meandering quality of mostly improvised movies, but instead simply feels authentic. The cast all became extremely comfortable with each other, and Silva said that Cera is now one of the Silva brothers. (Interestingly, the film is also produced by two other siblings, Juan de Dios Larraín and his brother Pablo Larraín, whose No is in the Spotlight section.)

One’s ability to warm to Crystal Fairy is entirely dependent on how tolerant of Cera’s highly irritating Jamie; it’s one of those films that refuses to make it easy on the viewer. But for some, the very presence of Cera in the movie was troubling in itself. The very last question of the Q&A, asked in Spanish, was about why Silva had cast Cera in the movie, rather than a Chilean actor. Silva’s response? “I think, in the end, we’re all the same.”

While that response tied in nicely with the new age-y feel of the movie, the question certainly is a valid one. Yes, Silva’s previous movies have been critically acclaimed, but the commercial prospects of his films can only be helped by having a big-name U.S. actor in the lead.

Looking at this year’s Sundance lineup, there does seem to be a lot of blurring of the lines between what is a foreign film and what’s not. At the lunch for international filmmakers, I bumped into Croatian director Goran Duki?, whose Wristcutters was a hit here seven years ago. At this year’s fest, Duki? has a delightful animated short, What Do We Have in Our Pockets?, which is based on an Israel-set story by Etgar Keret, but has been transposed to L.A. and stars Duki?’s friend and fellow director Azazel Jacobs and his wife, Diaz.

Also at the lunch was Alicia Scherson, another Chilean director, whose movie The Future is much anticipated, largely because it is based on a novel by the late Roberto Bolaño – and has Rutger Hauer playing the lead role of an aging movie star. Two further World Dramatic Competition titles, Metro Manila and Houston, represent two differing aspects of this trend of cross-pollination. The former is a Philippines-set thriller from Oscar-nominated British director Sean Ellis, while the latter is the second feature from German director Bastian Günther (who splits his time between Berlin and Austin, TX) and is predominantly set in Texas.

Talking with a programmer from another festival today, I broached the subject of this dilution of the World Dramatic competition. “There’s not a lot of foreign films here, are there?” she said. It definitely feels like that. At the same time, I’m all too aware that, ironically, the very reason I’m discussing the World section at all is because of it is being watered down.