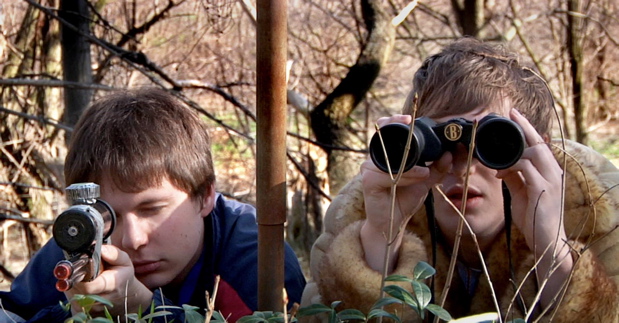 The Dirties may very well be some kind of terribly depressing cautionary tale or it may just be that the joke is on us, but this debut film from Matt Johnson, who also stars and co-wrote, couldn’t be more topical. It’s bound to cause much discussion should it find larger audiences, and perhaps even if it doesn’t, as the spectre of school shootings hangs heavy in many hearts this winter.The most talked about film at this year’s Slamdance even before winning the festival’s Grand Jury Prize at a ceremony last night at Park City’s Treasure Mountain Inn, Johnson’s film is a poorly shot, cleverly assembled rough hewn verite narrative, which at first glance seems to be headed into similar territory as Andrew Edison’s Bindlestiffs, a forgettable high school narrative the festival unfurled in 2012. However, as this at first glance rudimentary and thoughtless movie begins to elegantly and depressingly explore the dangers of high school bullying, of the kinds of empty, pop-culture obsessed lifestyles most American teenagers are subjected to, it becomes increasingly compelling, until it builds a momentum, a subtle power that is akin to a much more rigorous and controlled movie that also deals in 21st century high school tragedy, Antonio Campos’ Afterschool. At a festival where violence is so often taken with little more than a shrug (see this year’s out-of-competition, Larry Fessenden-Sean Young vehicle Jug Face for example), it’s refreshing to see a movie, even one a uneven and sophomoric as The Dirties often is, deal thoroughly with the subject.

Matt (Johnson) and Owen (Owen Williams) are best friends, high school cinephiles and at turns charming and obnoxious outcasts. They make amateurish movies and quote from the modern classics constantly, occasionally discussing video games or Magic cards. They are caught in a cycle of co-dependence that teenage male friends rarely find the emotional space to acknowledge, let only transcend with dignity. We watch them get bullied, pull pranks, ogle girls from afar, although we rarely see them with doing so outside of editing, plotting and making movies, almost all of which are relatively bogus pastiches of well known contemporary films. One original idea that Matt is particularly enthusiastic about: a picture called The Dirties, in which he’ll get to blow away all the hard guys who torture him at the intellectually draconian and aesthetically unpleasing high school they both attend. At the film’s beginning they’ve already shot some of it, and much of the film’s unimpressive opening moments concern post-production of their first few scenes. They even screen some of their earliest footage for their class; a teacher tells them to remove any violent gunplay from it. Matt has others ideas however. He plans to up the ante entirely.

As the picture wears on, Owen becomes more interested in impressing girls, especially a vapid but gorgeous high schooler who almost always seems to be be there when Owen or Matt get pushed around by better looking and more athletic jock types. Matt grows increasingly obsessed with making The Dirties actually violent, saying that they really should just blow away “the bad guys,” and even fantasizing about how, once they do it, all they’ll have to do is tell everyone that that’s what they’re doing, with megaphones and all, for everything to be alright. The relationship between the two boys, which is portrayed without irony as mutually pleasurable and supporting in a series of on-the-nose montages in the film’s first half, ends in failed pranks and swapped recriminations about being a pussy.

Convinced that he needs to shoot The Dirties of this film’s title in real life, with real guns, by this point in the picture Matt is clearly an unstable individual, someone who has been so desensitized to the consequences of violence, ostensibly through media, and yet so consistently subjected to the terror that its threat brings, that such ideas seem plausible and attractive. He discusses it out loud with Owen, who I doubt ever takes him seriously until it is far too late. By the time he’s mentioning it to other people in fits of anger, taking retreats with his cousin Nelson to shoot guns in a rural getaway and growing increasing unattached to any notion of reality that isn’t mediated through his video camera, the audience would be remiss not to know that very soon, there will be blood.

Who parents children like this? And where are they? And how easily does a young man like this get guns? We never glimpse any room in Matt’s home other than his movie poster and Magic-card-laden basement. Clearly he’s white, well to do, just like all the other school killers (save Virginia Tech); he has a brand new Mac Tower, where his eyes dart over the images of the very film we’re watching with glee bordering on desperation, and ostensibly he lives in the type of pre-fab suburban community that spawns a particular kind of American cultural madness. In its own way then, the film gives ammo to both political conservatives and liberals about why Americans have become such a violent people. To kill like this in America, the film seems to argue, you probably need to be as well versed in Fight Club and Malcolm X as you are in how to operate a handgun. That’s an incendiary argument and to be made so persuasively, so painfullly even, with such a limited means and almost naive ambiguity marks Mr. Johnson as some kind of marvel, or maybe just another prankster. With his empty brown eyes and permanently over eager, easily distressed face, he looks not unlike many young film producers I know. One way or another, by any means necessary, they”ll get the money shot.