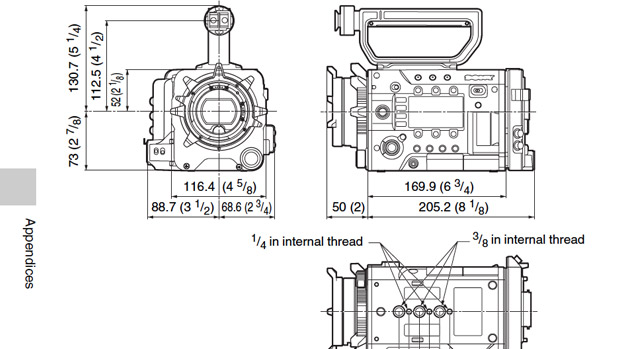 by Michael Murie
in Cinematography, Filmmaking, Post-Production
on Mar 4, 2013

Two weeks ago RED announced that they were suing Sony for patent infringement for technology used in Sony’s PMW-F5, PMW-F55, and F65 cameras. Last week Sony posted a response on their Pro video website. First noting that the F65 has been commercially available for over a year, and that the F5/F55 were announced in October, they go on to say:

Sony has now had an opportunity to study Red’s complaint and the asserted patents, and categorically denies Red’s allegations. Sony intends to defend itself vigorously in the Red lawsuit. Sony looks forward to prevailing in court, thus vindicating the Sony engineers who developed Sony’s quality digital cinema cameras.

This firmware is not part of a scheduled release. It is an interim release to provide immediate correction to the “black edge on highlights” issue reported by some users. This issue rarely occurs with Ver. 1.02 only when shooting with S-Log2 or HyperGamma selected; it is not present in RAW or Standard Gamma recordings.

Of course, then Blackmagic ran into production problems, and the camera wasn’t really finding its way into many users hands. That has changed over the last couple of months, and with more users has come more reports of problems with different lenses. One user, Philip Mortimer, reported on the Blackmagic forum:

This week Kristian Lam from Blackmagic Design posted that they have found the cause – and a solution to – the problem.

When checked against a collimated cine lens, we expect the Blackmagic Cinema Camera to get accurate focus according to the witness marks on the lens. For example, at focus chart placed 6 ft from the camera sensor plane will be in focus when the witness mark on the lens is at 6 ft.

When I tried the same collimated lens on some 5Ds, 7Ds and even a C300, the witness marks fall short of the expected distance which indicates to me that there’s some fair amount of tolerances built into the Canon cameras to cater for still lenses where the tolerances are not as critical as cine lenses.

To address this, we need to put in the same allowances. We have tested this with some of the cameras from customers reporting this and it works.If you think you’re encountering this issue, please contact your local Blackmagic Design support office and we’ll sort you out.

The good news is that a solution exists, and future cameras will have the fix. The bad news is that if you have a camera and are experiencing the problem, you will have to send in the camera to get it recalibrated.

Avid postpones Fourth-quarter earnings report due to “accounting problem”
The Academy Awards should have been a good night for Avid; Argo was edited on Avid, and all five nominees for Film Editing were also edited on Avid. But on Monday Avid announced that it was postponing its fourth quarter earnings report due to “accounting problems.” They have not said when they will announce their results.

This news comes less than a month after chief executive Gary Greenfield was replaced by Louis Hernandez, but it’s hardly news that Avid has been having problems. Avid hasn’t reported a profit since 2005, and has been hemorrhaging employees – and market share – for most of that time.

Avid is well established in Hollywood film production and broadcast news editing, but has found it difficult to expand into other segments as it has watched its rivals – Adobe Premiere and Final Cut Pro – become more sophisticated. In the mid-2000s Avid spent about $460 million to acquire Pinnacle and another $200 million to acquire M-Audio in an attempt to enter the consumer market. Last year they abandoned the consumer market – including an iPad “Avid Free DV” application – and sold off those assets for about $17 million.

The stock is currently trading under $7, having steadily declined from $22 two years ago.

Film is not dead yet!
The day after the Oscars Kodak sent out a press release pointing out that the Best Picture winner, Argo had been shot on Kodak film (on several different film stocks too). The release went on to say, “In the 85-year history of the awards, no Oscar®-winning Best Picture has ever been made without motion picture film technology.”