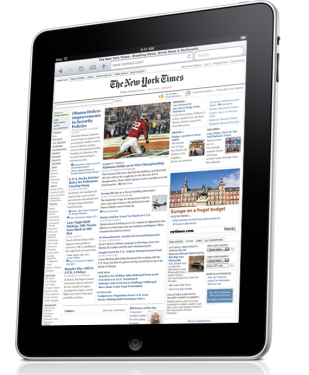 The first round of Apple iPad reviews has hit the ‘net. David Pogue of the New York Times split his somewhat muted review into two points-of-view: the tech geek and everyone else. He begins both by writing, “The Apple iPad is basically a giant iPod Touch.’ The tech geek POV review is mixed; the “everyone else” pretty positive. Edward Baig in USA Today is less equivocal:

The first iPad is a winner. It stacks up as a formidable electronic-reader rival for Amazon’s Kindle. It gives portable game machines from Nintendo and Sony a run for their money. At the very least, the iPad will likely drum up mass-market interest in tablet computing in ways that longtime tablet visionary and Microsoft co-founder Bill Gates could only dream of.

For the past week or so, I have been testing a sleek, light, silver-and-black tablet computer called an iPad. After spending hours and hours with it, I believe this beautiful new touch-screen device from Apple has the potential to change portable computing profoundly, and to challenge the primacy of the laptop. It could even help, eventually, to propel the finger-driven, multitouch user interface ahead of the mouse-driven interface that has prevailed for decades.

Significantly, both Pogue and Mossberg report 11.5 – 12 hour battery life with movies continuously playing and WiFi on.

Xeni Jardin at Boing Boing also scored a pre-release iPad. She calls it “a touch of genius”:

It strikes you when you first touch an iPad. The form just feels good, not too lightweight or heavy, nor too thin or thick. It’s sensual. It’s tactile. And it’s a good way to spot a first-timer, too, as I observed with a few test subjects. The dead giveaway for an iPad n00b is pausing a few breaths before hitting the “on” switch, and just let the thing rest there against skin.

The reviews all point out some of the device’s limitations: no camera (so, no Skype or teleconferencing), no Flash (so lots of online video won’t play), no USB, and the centrality of the Apple store as a hub for content import. Also, even in the best reviews a slight wait-and-see factor can be detected. Here, for example, is Jardin:

Maybe the most exciting thing about iPad is the apps that aren’t here yet. The book-film-game hybrid someone will bust out in a year, redefining the experience of each, and suggesting some new nouns and verbs in the process. Or an augmented reality lens from NASA that lets you hold the thing up to the sky and pinpoint where the ISS is, next to what constellation, read the names and see the faces of the crew members, check how those fuel cells are holding up.

I like it a lot. But it’s the things I never knew it made possible — to be revealed or not in the coming months — that will determine whether I love it.

Tim Gideon in, of all places, PC Mag gives the iPad a strong 4 1/2 star review. Below is the accompanying video review from the site.

Previously at Filmmaker: How the iPad Will Affect Filmmakers.