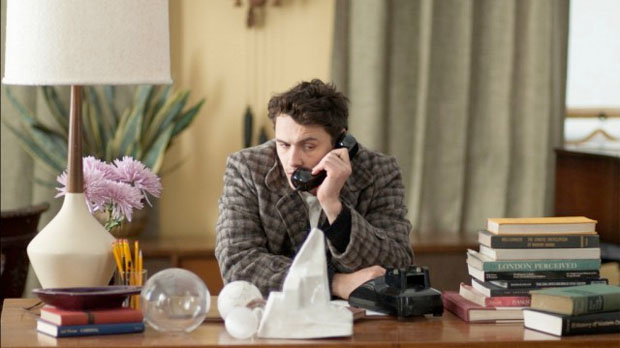 Having established himself as a painter, photographer, and sculptor, Carter continues to expand his art repertoire with his newest feature film, Maladies. After working with James Franco on his directorial debut, Erased James Franco, Carter decided to write another film with Franco in mind. Maladies follows the relationship of a former actor who befriends a family of artists. All equally eccentric, their interactions explore the struggle artists often have with creativity. The movie also stars Catherine Keener, David Strathairn, and Fallon Goodson, who also acted as a producer. Maladies premiered at the Berlin Film Festival in February and makes its North American debut tomorrow in Austin at SXSW.

Filmmaker: Though you wrote the screenplay with James Franco in mind, what truly inspired the story?

Carter: It wasn’t so much inspiration as it was the interest in creating a solid film that was both narrative and poetically challenging. Once the story started coming into focus for me I became very interested in presenting a person struggling with their creativity and the “legacy” of their work once they died. Catherine’s character as a friend and caretaker to James and her questioning of her (sexual) identity was key as well. I could work with those two characters for a long time.

Filmmaker: How was the collaborative process of making a film different than creating your other pieces of art? Do you want to do it again?

Carter: They are very different. Primarily when I’m working in my studio I’m working alone with a radio and art materials, and I work very organically to finish what I’ve set out to do, whether that’s a painting, sculpture, a video, drawings etc. Working on this film began in much the same way; writing the story and scenes, alone with pen and paper, organically at the beginning. At some point there came a moment when I had to tighten and fine-tune the writing into what can be acted out and shot on film. The challenge was keeping those poetics (the writing) in place as it was guided through the structure of shooting and editing the film. That’s where the collaboration part comes in. Do I want to do it again? Of course.

Filmmaker: How do you think mental illness relates to being an artist?

Carter: That’s a loaded question. There’s the problematic, romantic notion of the artist as “tormented,” but there’s also a more open illustration that I prefer, the one from the Ancient Greeks in which creativity came from the Gods, or the muses….from somewhere else! I prefer that approach. Although my character in the film is a creative person who happens to also struggle with “illness,” that doesn’t mean that I believe there is a connection between illness and creativity across the board. The use of the voiceovers in the film connect more for me as a sort of “internal Greek Chorus” rather than strictly “mental illness.”

Filmmaker: Did you produce any of the art seen in the film?

Carter: I produced most of it, paintings and sculptures. I also hired two other artists whose work I like, Nancy Ford and Dan Spencer, to create pieces for the sets. It was important for me to have actual art in the sets with the actual performers.

Filmmaker: What are your ultimate goals with Maladies?

Carter: To have people see the film and to enjoy the performances.