How to Raise Seven Grand in Seven Days on Indiegogo 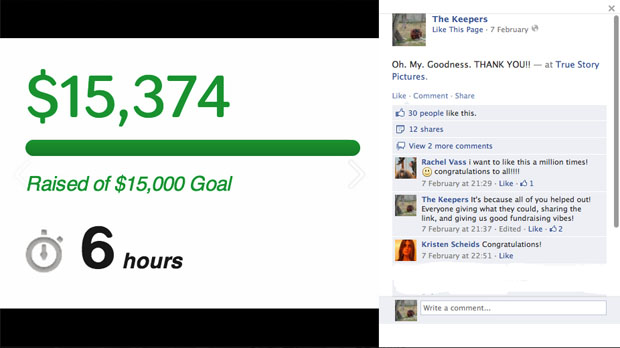 by Sara Kaye Larson
in Filmmaking, Financing
on Mar 11, 2013

My film partner and I reached our crowdfunding goal for our documentary film project, The Keepers, last month. I previously wrote about some of the issues and questions about crowdfunding and documentary ethics that came up during our long campaign. This piece is a useful follow-up that explains how we were actually able to beat the odds and raise half of our goal in the final week. This was written with the hopes that other indie filmmakers can apply what we have learned to reach their own fundraising goals.

What they say is true

By now it’s common crowdfunding lore that you should aim to raise 25% of your funds within the first couple weeks from people that you know. We were pretty much on target with that goal. But given that we ran a long campaign, our numbers were stagnant for days, even weeks, at a time, and we were left with the task of raising 50% of our goal in final seven days. We had to trust that the groundwork we’d laid was going to pay off ultimately. In the end, with a bit of strategic bolstering in the final week, it turned out that having our people — our circle of influence — in place, and working on expanding those connections, did pay off – to the tune of $7,000 in the final six days. In this case, a lot of hard work, a good bit of patience, and some blind faith were all we needed.

Don’t rely on the kindness of strangers

You may be one of the lucky or brilliant ones whose project catches fire and goes viral, but we learned that for the most part you can’t rely on perfect strangers. We estimate that less than 10% of our donations came from people we weren’t at least connected to in some way. The overwhelming majority of our donations were from friends, family, and their networks, or from certain populations that we had reached out to directly through our offline campaigning. Bottom line: you aren’t “done” with the people you know after you reach that first 25% with people you know, you are only laying the foundation for your campaign.

It will help most potential crowdfunding campaigners to know this ahead of time and to think strategically. First, identify your circle of influence. That’s a fundraising term for people you know who will be interested and enthusiastic, who can give, and more importantly, know other people that you don’t who can get the word out too. Second, look into how you can graciously tap into your friends’ networks, and how can you reach these people without slapping a link to your crowdfunding project in their face so that they’ll unsubscribe from your Twitter and block your emails.

When you have a week left, it’s time to take stock of your resources: what you’ve been doing that has been working, and also what hasn’t. For example, we saw that certain mass emails were getting responses, that our Facebook numbers were up, and our letter campaign was paying off. On the other hand, our time spent on “retweeting contests” and trying to interact and get noticed by the larger indie film and community wasn’t showing much return. So instead of spinning our wheels trying to get noticed, we decided to focus on who was closest to the project and how we could turn people that were already rooting for us into our message machines.

Crowdfunding campaigns are online, but unless you have a stellar social network already in place, you are probably going to need to do some real-world letter writing, phone calling and follow-up. Think about what your project offers people and how you can get featured in traditional media. If you live in a smaller city or town, this is certainly something you can use to great advantage.

A major factor in an offline and online strategy is to find cross-referential ways to follow up. We sent letters out to zookeeper associations and our indie film friends. In the final week, we either called, emailed, or posted on their Facebook walls. Waiting until the final week added a sense of urgency and we were sure to post something that would be interesting to the people we were trying to reach, which brings us to…

Go ahead and buy your friends, but make it worthwhile

It didn’t take long for us to notice that a Facebook post doesn’t go as far as it used to. Thanks to Facebook’s uncrackable newsfeed witchcraft, a lot of social media effort can go to waste if you don’t plan carefully. We debated on buying ads and tossed around the idea of paying for a promoted post, but we were worried about not being taken seriously and that we might look desperate. With a week left and nearly half our goal to still raise, we got a little less worried about looking desperate and went for it and it worked out surprisingly well.

The decision to pay depends on your particular project. Facebook ads probably aren’t really going to help you, but the promoted post probably will. It works because it taps into people you already have a relationship with, people that already like your project page and their friends — essentially that circle of influence mentioned earlier. A few days before our final week countdown, we sent out a press release and were able to spin it enough to get a bit of local press coverage. This was really important because it gave us legitimate, interesting content when we finally decided to shell out a bit of cash (about $5 each) for a couple promoted Facebook posts. And that was the key. If you are just going to paste another link to your crowdfunding campaign, forget it. Everyone has seen it. You should at least give people a great production photo or perk photo, a behind the scenes video or, as in our case, a couple of local articles about the project and the Memphis indie film scene. People are much more willing to share a great photo, video, or article, so give them something tangible to help them spread the word.

An idea borrowed from a few other successful crowfunding campaigns was to create a “Funder Hall of Fame” where we put screenshots of our Indiegogo donations page (minus the amounts) and tagged people we knew and encouraged others to do the same. Effusive gratitude is a huge part of a successful crowdfunding campaign, and we already had been sending personal emails and social media shout outs to every donor. This, however, was a final-days wrap up that not only recognized the generous people who gave to the project, but also created a really impressive visual image. Seeing a couple hundred names lined up like that let others know this project had backers! With so many people being tagged and recognized, we are sure that friends of friends, ones we may not have access to, also saw the gallery and that created even more interest.

In addition to rolling out a few new perks in the final weeks, we posted screenshots of our funds raised and time left on each of our final five days. We didn’t really know that people were paying attention until we posted a screenshot that showed we had made our goal with six hours to spare. Then we had a storm of congratulations come in through text, emails, Facebook, and Twitter. People instinctively like to root for things, especially if they are participating in some way, so don’t forget to make it as much like a race or sporting event as you can.

Let people save you

With a few days and still about five grand to go, we assessed our chances and realized we should make an offline list of some folks that we might convince to “save us.” These were well-heeled folks, arts patrons, community philanthropists, etc., who might be able to give high dollar amounts in the final hours. We found a way to connect value to the film and to our indie film community. We let these people know that reaching our goal would be beneficial in all aspects – marketing, publicity, and future fundraising.

We, or I should say my partner with her amazing philanthropic connections, were fully prepared to cold call people and ask for the big bucks, and something wonderful happened: with each phone call the amount we needed kept shrinking. Sure, in the final days, we got a couple really big dollar (over $500) donations, but we were surprised at the huge amount of people that stepped up in the $10-50 dollar range. We ended up with 219 funders and 118 of them came in the final week. We think this is because we covered all of our bases and our message had really started to multiply through people spreading the word. The more money you can get “on your own,” the easier it makes it to call on these last minute saviors. It shows them how many people have given what they can, and encourages them to do the same.

Never lose sight of the why

Above all else, you have to believe in your project and the value of reaching your crowdfunding goal. When you reach your goal it not only ensures you have the funds for your project, but lets the people who donated know that they chose correctly. It shows future funders (if you need them) that you are willing to think strategically and see things through to the end. We spent three and half months laying the ground work with social media, crowdfunding page updates, videos, photos, letters, and phone calls. Because we didn’t lose faith, we were able to activate the magical forces of the circle of influence from all angles in the final week — and of course, so can you.

We used throwback photos of our keepers to help promote the campaign. This is keeper Sani Shoemaker and a little joey. 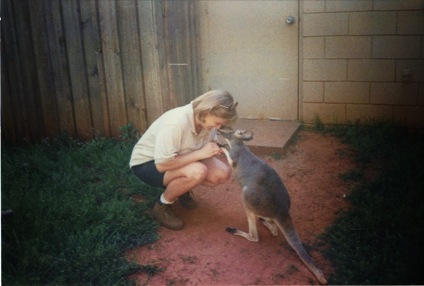 We were lucky enough to have the benefit of throwing out a baby animal photo for our campaign — like this adorable baby giraffe born during our documentary filming: 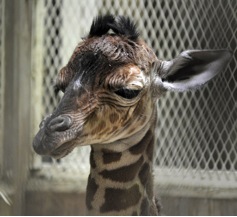 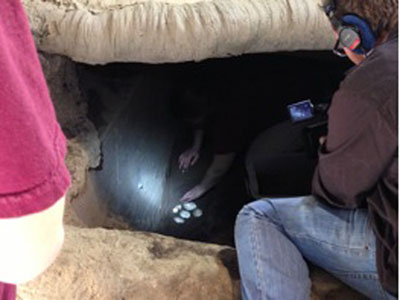 An example of the screenshots we used. We still had a ways to go with eight hours left. 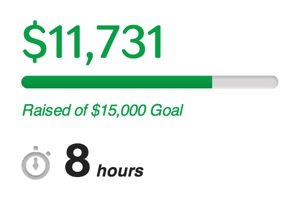