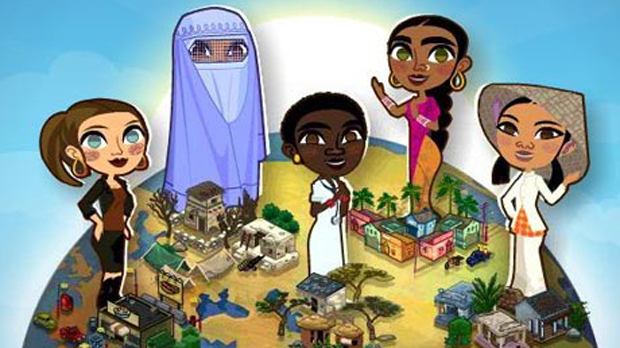 Tuesday night Facebook hosted a panel discussion about social issue-oriented transmedia at their office in midtown Manhattan. The event was co-sponsored by the Tides Foundation, a San Francisco nonprofit that funds philanthropic ventures, and featured Beth Janson, executive director of the Tribeca Film Institute and representing its All Access program, Didi Bethurum of the social action campaign 10×10 and the documentary Girl Rising, Michelle Byrd of Games for Change, and Libby Leffler, Facebook’s Strategic Partner Manager who interfaces with nonprofits, charities, and philanthropic causes.

A lot of the work discussed by the panel comes in the wake of the Half the Sky movement, a book, film, and transmedia project that Filmmaker wrote about last October. The project includes a four-hour documentary, an hour-long redaction of the film, and multiple short films for use by NGOs in developing nations. The most recent component is the Facebook game “Half the Sky Movement: The Game” (pictured above), which launched 11 days ago and began advertising yesterday. The idea to include games under the Half the Sky umbrella came from authors Nicholas Kristof and Sheryl WuDunn in order to reach an audience that doesn’t read thick nonfiction books or watch PBS documentaries. The Half the Sky team, including the film’s director Maro Chermayeff, enlisted Games for Change, a nonprofit that facilitates the creation of games about social issues (in her comments Byrd emphasized that they are not a game design studio), and they in turn landed upon Facebook as the optimal platform on which to reach the widest audience that could become interested in women’s health, education, and empowerment. Facebook’s numbers, of course, are impressive: 300 million people a month play games on the site. Tapping into even a fraction of that would be huge for any content producer.

As Byrd explained, the Half the Sky game essentially represents a series of partnerships with funders, beginning with the United Nations Foundation. It was able to attract this support, and really fill the remit of achieving immediate results in developing countries–rather than merely raising awareness of women’s issues with Facebook users who may or may not take subsequent action–by providing multiple ways for players to actually donate real money to partner organizations like Room to Read who are already on the ground working in impoverished areas (including in the U.S.). For light users–those who don’t want to spend a long time playing a game–there is a means where they can make a direct donation without any gameplay. For heavy gamers there are multiple ways–dealing with characters’ energy, power-ups, and currency–to enhance their gameplay while making real-money donations. Regardless of how the money is donated, it is administered through Tides and distributed to the recipient NGOs and charities. What this really reflects, Byrd said, is a new form of game-based fundraising we’ve never seen before. It’s similar to crowdfunding or charities’ more traditional direct appeals, but since it occurs through gameplay it opens intriguing possibilities that IndieGoGo and telethons can’t. Ten days after its launch, “Half the Sky Movement: The Game” is doing quite well, particularly with females over 35 (a target demographic), although how advertising will increase its revenue remains to be seen. Perhaps more interesting, many of the Half the Sky users, like the films’ viewers, are outside the United States in areas where the charities are doing their work.

Bethurum showed the trailer for Girl Rising, a feature documentary about nine girls seeking education in developing areas, and talked about its grassroots theatrical-booking campaign, done in partnership with Gathr. Through social media they have involved roughly 1,000 people in their marketing efforts, and through those contacts they now have over 53,000 theatrical tickets reserved, done primarily through old-school texting: anyone can text “rise” to 55155 to request a screening in their area, and Gathr analyzes geographical information and works with people from there to set up screening events.

Leffler spoke about ways in which Facebook, primarily through its global user network, can assist in promoting causes. The first way nonprofits engage with Facebook is through groups and pages: built-in components of Facebook’s existing interface. Movember, the charity movement for prostate cancer research, recently raised $17 million this way. The second way to utilize Facebook is through developing specific apps (often games), done through platform partners like Games for Change. Charity: water recently ran a campaign in this way challenging people to “donate their birthday” (i.e. for me $9.21) to help get potable water in developing areas. JustGiving in the UK created Facebook and mobile apps that simply facilitate people giving to other charities, and in 2012 they procured $53 million in donations. Finally, to show the social power of a simple Facebook status update, Leffler showed a video about the Yellow Boat of Hope Foundation which showed how a Facebook user’s post about some children having to swim to school in the Phillippines received a challenge from one of his friends–“What are you going to do about it?”–that resulted in him founding a nonprofit to provide boat transportation to school for rural Phillippino children.

Finally, Janson spoke about the Tribeca Film Institute’s efforts through All Access (which funds producers from under-represented communities), its new TFI Sandbox web resource, which I wrote about for Filmmaker last month, and the TFI New Media Fund, which funds social issue nonfiction transmedia and is going to announce its newest round of grantees in June. She discussed Tribeca’s relationship with partners like Games for Change, Room to Read, and FilmAid, which has a new project about Kenyan refugee camps I’ll be writing about in a few days. One overriding point filmmakers must remember is that we’re now well beyond the days of creating one main project–usually a feature film–and then ancillary products or transmedia to revolve around it or publicize it. With a project like Half the Sky every element is just as crucial as any other and enjoys just as much autonomy in its purpose and care in its execution. Hence, partners like Room to Read will be much more vocal in their needs and the product’s content than they might have been previously. Filmmakers need to, first, be prepared for this more robust give and take–and increased attention given to even short videos and video games–and, second, therefore, give a lot of care to getting the right partners, both in terms of funders/NGOs and creative team members like coders and programmers.

Some final points from the evening include:

* Facebook has a nonprofit resource center that outlines best practices and similar information; the newest guide was released just yesterday.

* The ninth annual Games for Change Festival will be held in New York in June.

* A week ago the Tribeca Film Institute launched its inaugural membership program, which offers news and discounts.