Color Grading A Glimpse Inside the Mind of Charles Swan III, Part 2: Chris Martin on the Art of the Post-Grade 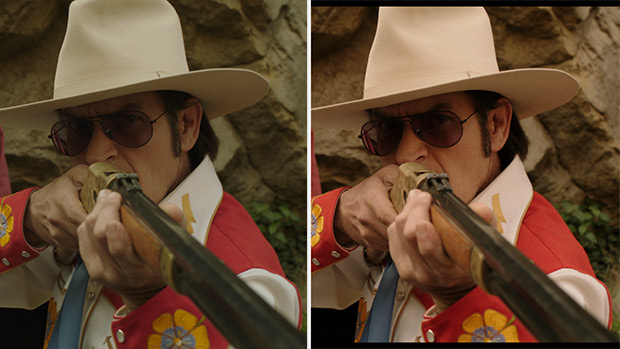 by Michael Murie
in Filmmaking, Interviews, Post-Production
on Mar 27, 2013

In this second part on the color grading of the movie A Glimpse Inside the Mind of Charles Swan III, Chris Martin of SPY describes his work to complete the final grade, the workflow, and the color look of the picture.

Chris is a senior colorist at SPY, a post house in San Francisco that does both commercial and narrative feature work. SPY is a visual effects house, but they also have their own DI theater. SPY has been owned by FotoKem since 2009.

The first half of the grading process is described in: Color Grading A Glimpse Inside the Mind of Charles Swan III, Part 1: Ryan Bozajian on the Art of the Pre-Grade.

The picture was directed by Roman Coppola and produced by American Zoetrope.

Filmmaker: What was your involvement with this project?

Martin: The previous year I had done the full DI on Francis Coppola’s film Twixt and we also did a lot of the visual effects, and the same editor, Robbie Schafer cut this movie for Roman.

They came to us and said, “We want to do the final DI at SPY, but we want to set up a high-bred way of doing it.” Because they were shooting in ARRI Alexa log-C they wanted to use Resolve on their end and do the pre-conform so that they could do a lot of the heavy lifting themselves. With the conform tool in Resolve Lite they were able to conform all the ARRI log-C footage and do the first pass of color correction at American Zoetrope.

I think this grew out of a combination of it being an independent film, as well as  Zoetrope really having a do-it-yourself spirit to things; they’ve always handled a lot of technical and post-production themselves.

Filmmaker: What did SPY have to do to accomplish this?

Martin: We sent our head of technology, Steve Maggioncalda over there and he calibrated their color environment as best he could to match our DI theater. Then we did a test where Ryan Bozajian and Roman did a couple of grades, saved that project out and brought it over to SPY, and to everybody’s eyes we were happy with the migration of the color correction decisions they were making.

Filmmaker: What was it like to work this way?

Martin: As a colorist I’m mostly in my dark room, but this was a new collaboration. They invited me over before they began, and I spent an evening color correcting with Ryan and Roman to aesthetically get my feet wet in the world that they were in. That was really interesting. I’ve never done that before.

Color correction has always been one of the most expensive phases of post-production, especially for feature work, and here was Resolve being used in a way where it really bridged the gap between a do-it-yourself company like Zoetrope, with a full facility like SPY post. And being owned by FotoKem we were able to then use FotoKem to handle all of the deliverables like the film out and the digital cinema package, we handled all the video masters here.

Filmmaker: When you say Conform, what do you mean?

Martin: They were cutting in Final Cut Pro 7. They shot in ProRes 4:4:4, but for the edit in Final Cut Pro they had made lower quality QuickTimes in ProRes HQ. When they were locked with their edit they were able to then generate EDLs out of Final Cut Pro and bring them in to their Resolve Lite system, where Ryan then used those EDLS to conform back to the ARRI source files.

Those are the kind of things that they were able to do in Resolve Lite that I categorize as heavy lifting, meaning they are very important things to do, but you don’t need a color critical theater to be doing that.

When they were done with their conform and color pass at Zoetrope, Ryan brought over a mirrored drive and his Resolve Lite project and we literally hooked that drive up, imported the project into our full blown Resolve system and it linked up to everything right away. Immediately we opened the project and we had the full conform there, and we had all of Ryan and Roman’s color grades. 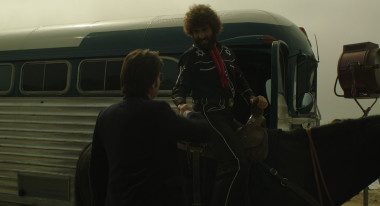 Filmmaker: You didn’t touch the project until they had finished the editing and first pass?

Martin: I had touched it in the sense that I went over there to spend a day color correcting with them, which was great because I got a chance to do some of the work, and more importantly get a sense for the aesthetic that Roman was going for.

Ryan and I worked out a work flow where we could compartmentalize the color correction so that I would inherit his color corrections and use Resolve nodes to add my own adjustments that Roman wanted to make on top of that. That allowed us to do a before-and-after very efficiently to see the difference between the adjustments I made to what Ryan made.

Filmmaker: What was the color workflow?

Martin: This is the first time where I have literally inherited a project that somebody started coloring. Usually you’re building the correction yourself from the original camera source. We wanted to make sure in this process we had a very efficient way of working where I could work off of his grades, and how best for me to make changes on top of Ryan’s corrections. One way would have been to just copy his correction as a version and then start from scratch, but we thought that it would be a great way to use Resolve nodes.

Any adjustments that I made I created a node and made a correction to that, and then I could turn on and off that node and we could see that difference. It made for a nice efficient session where we weren’t stepping on each other’s toes. 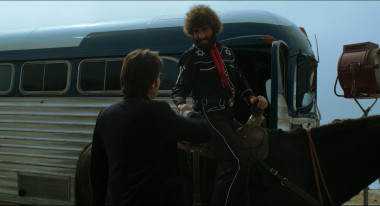 Filmmaker: Was the color look defined when you had that initial meeting?

Martin: What made this really efficient was not only developing the technical workflow, but doing it this way allowed me to know at an aesthetic level the direction Roman wanted. The film definitely has a retro look. Even though it was shot on a digital camera, he wanted to approach the color grade like he would a traditional lab timing route. Resolve’s got a lot of really wonderful tools at your disposal as a colorist, everything from power windows, which are geometry shaped masks, to keying certain colors. Those are things that you can’t do in a lab. But for this film Roman really wanted to stay true to that spirit and so we were kind of joking around that even though Resolve could do a quick fix on a particular thing with me drawing a key or a matte, I would ask Roman permission as I really wanted him to stay in the loop because he wanted to approach this in a very lab centric way creatively.

Filmmaker: It was two days to do the correction?

Martin: The second day was a little more fine tuning. Having done DIs where you’re starting from scratch, two days is such a small amount of time, but we didn’t feel rushed.

Filmmaker: Was Roman there for the entire DI?

Martin: Roman was very, very involved with the whole process. When I went over to Zoetrope for a session, it was Roman, Ryan and myself working. He was here when we were doing the round trip test to make sure that everything was translating the way they hoped it would, and then he was here for the final DI.

Filmmaker: What was the look of the picture?

Martin: In characterizing the look I would say that it is an homage to film and shooting film, and approaching the DI color correction as you would a lab timing. By that I mean it’s got a softer contrast range to it, I think the film overall likes to move around and have diverse color palettes. It has a warmer feel to it than you would think of a film shot on film and the overall colors are not electric; we haven’t pushed a commercial or stylized look. With the art direction that Roman had, which I think had a very unique, quirky feel to things, I think this color correction really did justice to that.