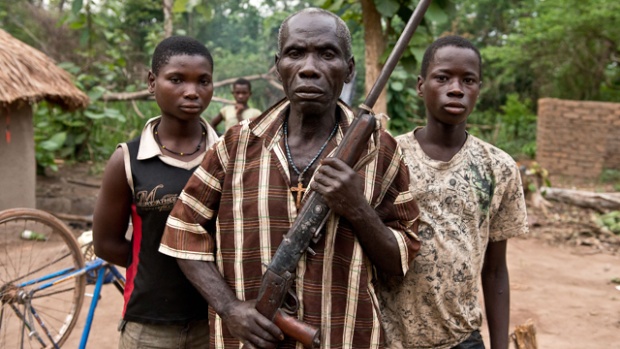 A number of films at this year’s Full Frame raised questions for me about issues related to memory, identity, and storytelling. As Amir Bar-Lev reminds us, in Full Frame’s programming notes, that documentary is a “strange and problematic medium where journalism and art meet,” and many of this year’s films reflect overtly or more subtly about the role of storytelling and its relationship to memory, identity, and in some cases, politics.

Patrick Reed’s Fight Like Soldiers, Die Like Children, which had its North American premiere at Full Frame, depicts the efforts of Lieutenant-General Roméo Dallaire, a witness to the Rwanda genocide in 1994, as he seeks “to eradicate the use of children as instruments of war.” We follow as Dallaire visits battlegrounds in the Congo, Rwanda, and South Sudan, where meets with former child soldiers and other local groups to get a better understanding of how children are recruited into the military. These accounts are interwoven with animated scenes depicting the experiences of child soldiers.

Dallaire is still clearly haunted by his experiences in Rwanda, and the film shows his determination in understanding how children are recruited to fight and in reversing the practice, even while acknowledging the difficulty of the task. As Dallaire admits at one point in the film, he learned that it was important “to be serene about the fact that this is long-term stuff,” that it could take decades to end the practice. Fight Like Soldiers was also attentive to the role of campaigns such as Stop Kony (http://invisiblechildren.com/kony/) that briefly brought attention to the use of child soldiers but ended up faltering, in part because many of its supporters sought a quick fix, rather than acknowledging the need to focus on the long haul.

Ryan White’s Good ol’ Freda offers a slyly humorous and insightful portrait of Freda Kelly, the 17-year old Liverpool girl who went to work in 1961 as the secretary for the Beatles and eventually was asked to run their fan club, taking on what one London newspaper called “the most coveted secretary job in the world.” Kelly, who never cashed in on her Beatles connections or her vast collections of Beatles memorabilia, continues to work as a secretary. She also proves to be a charming storyteller, providing an original perspective on the band and their sudden ascent into stardom. Kelly joyfully describes watching the Beatles in a local dive, the Cavern, which she vividly recalls smelling like a mixture of disinfectant, rotten fruit, and sweat. We also learn about her friendships with the band—and even the band members’ parents—such as when George Harrison’s father taught Freda to dance or her frequent dinners with Ringo Starr’s mom.

But what stuck with me the most was Kelly’s role in constructing Beatles fandom, in writing the monthly newsletters and in responding the many thousands of fan letters — which for the first couple of years were sent directly to her home — even sending locks of hair to some especially ardent fans. Throughout the film, Kelly goes through many of these artifacts, whether photographs, newsletters, or even a personalized Christmas recording, demonstrating the power of these objects in inspiring nostalgia. During the question-and-answer session, White reported that Kelly had never sold her story or capitalized on her connection to fame—in fact, Kelly’s own daughter had never heard many of the film’s stories—making the film a compelling portrait of a participant in one of popular culture’s most pivotal moments.

In a much different type of portrait, Alan Berliner offered a powerful and haunting meditation on memory, aging, and identity in First Cousin Once Removed, which depicts his interactions with his cousin, the poet and critic, Edwin Honig, who has been diagnosed with Alzheimer’s Disease. Berliner and his cousin are clearly very close, connected not only by bonds of family but also by their roles as artists and thinkers. Honig, during a moment of clarity even suggests that Berliner’s film is “like writing a poem” because he is trying to affect how people think. The film follows the evolution of their relationship over five years, as Berliner documents Honig’s slow decline, even while the two of them attempt to define the relationship between memory and identity.

Berliner’s narrative is punctuated by the jarring audio of a typewriter tapping and ringing, sounds that evoke the practice of writing, even while they jar us, often disrupting our ability to think clearly. Photographs often prove discomforting, especially when Honig is unable to recognize people who were once familiar. Like many of Berliner’s other autobiographical essay films, it’s also remarkably honest acknowledging that Honig wasn’t always the perfect father to his adopted sons, and Berliner is open about his own fears that he will eventually lose his own memory. As the director noted before the screening, First Cousin Once Removed made him realize that he is “obsessed with issues of identity, family, memory, and how they’re connected,” and the film asks those questions in a stark, often unsettling, fashion, even while Honig’s curious, poetic spirit shines through.